smh– A sunny day in Sheffield, the northern English city that used to be the home of the steel industry. We are here to watch a day’s filming of Everybody’s Talking About Jamie, a film adaptation of one of the biggest hits in London’s West End, which is about a year 11 boy who wants to wear drag to his school prom.

You don’t get too many sunny days here, so it is unfortunate Max Harwood is obliged to wear a fluffy jumper and a sticky layer of make-up. And he has to run – in high heels – up the street repeatedly. “In the shade, though, so all good,” he says cheerfully.

As far as Harwood is concerned, this costume is no bother at all. On Friday, he had to spend four hours in make-up. “And I was wearing underwear, Spanx, two pairs of tights, a dress, a bra, padding and a wig. It was hot! But fun,” he adds, earnestly. Harwood is 20, playing 16. He had never put on drag before he auditioned as Jamie, and it was decided he should do a test with make-up to see how he felt about it. “I loved it! You become a different person!”

Everyone’s Talking About Jamie started life as a stage musical at Sheffield’s renowned Crucible Theatre, running for just three weeks. It is the brainchild of writer Tom MacRae, composer Dan Gillespie Sells and director Jonathan Butterell, who had the initial idea when he saw a television documentary about real-life schoolboy Jamie Campbell and his mother Margaret Campbell. Jamie Campbell liked to wear frocks and make-up, but had been told he couldn’t dress like that for his school prom.

The Campbells lived on one of the roughest edges of Newcastle. It doesn’t sound like the safest place to be a drag queen. But then, where is? With the support of a stalwart Geordie mum, he took the initiative of asking the TV crew along to watch him go to the prom and try to push those gender boundaries. He was expected to be turned away. As we see in the show, he wasn’t. His classmates made an old-fashioned stand for solidarity: let Jamie in or everyone was going home.

Butterell immediately saw the potential in a fictionalised version of Campbell’s story. “For everyone out there who feels like they’ve got more to give or more to say, and they don’t quite have the courage to do it yet, which I think is pretty much everyone,” says MacRae.

The Crucible came on board with an offer to workshop a production, with a view to putting it on as a show if it worked. In December 2013, Butterell, MacRae and Sells went to the theatre to see the Christmas show. Before it started, they asked for space to meet and nut out their idea. Appropriately, they were allotted the wig room.

“I took four pieces of A4 and wrote Act 1, part one on the first, then went through scene by scene and song by song what it should be,” MacRae says. “That is 90 per cent the show we made, so we always had a really clear idea of it.” It was immediately clear, for example, that it should be a musical. “With Jamie’s story, it’s about someone who has an interior life imagining what life could be, with a mum who is biting her tongue all the time.”

Power ballads could get those feelings across, just as big song and dance numbers could deliver the glitz and showmanship that Jamie craved. “I love music,” says Butterell later. “Music cuts to the heart. We all have songs in our lives that take us back to memory. Music does that in ways nothing else can do.”

They also wanted to set it in Sheffield, rather than Newcastle. Even if it hadn’t been commissioned by the Crucible, which sets out to involve local communities in its productions, they would have made that transition. “Sheffield is a very warm city. There is a great sense of humour and a fantastic music scene. It just felt like a natural fit,” says MacRae. “But we came here because Jonathan is from Sheffield, and he had quite a Jamie-sort-of-childhood. Not as a boy in a dress, but he ran away to Broadway to be a choreographer. So, a metaphorical dress.”

Butterell grew up on a housing estate. “When I first created this as a theatre piece, I wanted to create a love letter to Sheffield because there are assumptions that come with certain communities and I wanted to sort of blow those assumptions,” he says. Growing up gay there wasn’t easy, certainly. “But it’s hard to be anything. Being gay was one of them. It was hard to be working class.

“I grew up in a large extended Irish Catholic family. What I observed was a lot of love, a lot of support and a celebration of what I was. I remember when I left home at 17, I got a letter on my bed the day before from my mum saying, ‘Jonathan, you have probably chosen to walk a rocky path, but keep walking it. And yes, maybe they will throw rocks at you but don’t stray from that path.’ My mum is a working-class woman from Sheffield, you know. That’s why this particular story spoke to me. Because I watched Margaret Campbell do exactly that same thing with Jamie Campbell.”

The initial stage show was made with local kids; the film was cast with auditions open to anyone around the country, but many of the performers attend the schools where they are now filming.

“There was one girl who had literally just left her school, done her prom and six weeks later was filming this prom in her own school again. So, it was very local for some people.” It is being shot during school holidays; when I visit, the production is also using a school that has been shut as a rehearsal space. It’s not glamorous, but the setting makes even a mass dance number – Work of Art, phenomenally energetic – seem that much more homespun.

Unusually, when Warp Films wanted to turn it into a film, they wanted to keep the original creative team. Butterell had only directed theatre, but they weren’t worried about that. “And we always talked about it being a movie, even before it literally became one,” says MacRae. “Jonathan wanted it to be like a pop album with a movie vibe. And I’m from a television background. I’d never done theatre before. When I wrote it, I was thinking of it very filmically. And now we get the opportunity to open the doors and do things you can’t do on stage. Like having people run through busy shopping streets and all the fun of having the extras.”

The Campbells are renamed New for fictional purposes. Tom MacRae says they retained the key elements of the story told in the documentary – boy in a dress, mother who supports him and will buy him large shoes, estranged dad, a drag mentor (played here with vivid brio by Richard E. Grant) and that northern city atmosphere – but he didn’t consult the Campbells or show them the script until it was finished.

“We have known Jamie since he was 20, so this was something that had happened to him really quite recently,” he says. “And I knew I had to be able to take that character and put him through the wringer; I knew he was going to break his mum’s heart in Act II; I knew he was going to become full of himself and an egomaniac and have to realise that. And I didn’t want to say that’s what I think about Jamie Campbell. When I wrote his arguments with his mum, I was saying ,‘well, I’m not saying Jamie Campbell would say this or that. It’s Jamie New.’ Although now that we know Jamie and Margaret really well, they say, ‘oh no, we used to have those arguments all the time!’”

Right down to the words he used in the script, he adds; Margaret marvels at how he got inside her head. “And of course, when we met Jamie, he just loved it. He’s been the biggest supporter we could have – and very honest about saying, ‘oh yeah, I would have done that and a hundred times worse’. Now it’s lovely having him around, but we just needed that creative space, at the start, to make it our Jamie before giving it back to him, so he could make a decision about whether he would choose it or not.”

The film was shot in July 2019, before COVID-19 shut down the theatres and most film production. Before the set visit, I went to see the musical on stage. The audience was thrilled with it. Two years later, Everyone’s Talking About Jamie has been one of the first shows to open in the cautious unlocking of London and is once again doing brisk business. You will usually see a lot of grey hair if you go to a London theatre show, but the session I attended was notable for the number of out-of-town teenagers looking self-consciously sophisticated in the lobby bar.

“Actually, I’ve observed such a cross-generational audience,” says Butterell. “I remember in Sheffield, about the sixth or seventh performance, there was one grandma with a boy – he couldn’t have been more than seven or eight – who came in a dress with lipstick on.”

Travelling around the United States to promote the film version, he sees couples coming with their children. “And the dad might be going, ‘Well, what the hell have I come to see?’ and then suddenly burst out laughing. Or I see the wife suddenly bend to her handbag for a tissue because there’s this older straight guy in tears.” Even in the south, people love it. “There is an assumption that this audience is not going to find that joy. And they have!”

It is a long time since we all became unexpectedly hot in the Sheffield shopping mall. “Well, the whole world has been waiting, so it feels like part of the massive experience everyone’s been going through,” says Butterell. With all the stopping and starting, the film was finished only at the beginning of this year. “And it feels timely. It feels like time for a bit of joy to come into the world.

“We’ve lived in a world that has just been entrenched in different politics, in some kind of binary sense of who we are, for so long – when we are all a glorious queer mess of human beings! I never want to wave a flag; my belief is just in telling stories and letting people take from them what they want. But if there is a message behind this, it’s just to create a safe space for people to be themselves.”

EastEnders spoilers: Shirley Carter takes revenge on Linda for her betrayal of Mick 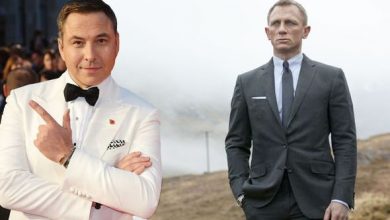