The crisis between the US and Iran is far from over

In an extraordinary mea culpa on Iranian state television Saturday, the commander of the unit responsible said "I wished I was dead," when he realized that what his unit thought was a cruise missile was actually a plane.Ukraine is demanding a full investigation and compensation for the victims — mostly Iranian, Canadian and Ukrainian — who died when the airliner was shot out of the sky, hours after Iran launched a number of missiles at two bases housing US troops in Iraq.Related: US unsuccessfully targeted another Iranian military official Now what? How are the families of the passengers and crew compensated for this unbearable loss? And how do US and Iranian government leaders, now in direct and open military confrontation for the first time since Iran's Islamic Revolution, map a route out of this crisis?There are still many unanswered questions about the evidence of "imminent and sinister attacks" against Americans that led the US to kill General Qasem Soleimani last week. Republican senators, Mike Lee and Rand Paul, joined Democrats complaining about the Trump administration's briefing to Congress. Lee called it: "The worst briefing I've seen — at least on a military issue — in my nine years."Congress also wants to know whether Soleimani was targeting four US embassies before he was killed, as Trump told Fox News on Friday. It will also seek to find out if the US's aim was broader. On the same day the US killed Soleimani in Baghdad, it tried unsuccessfully to kill another senior Iranian military official in Yemen.In the meantime, the latest USA Today poll since these hostilities started, say Americans do not feel safer since Iran's top general was killed.The poll found that 55% of Americans say the killing of Soleimani makes the US less safe, while 57% oppose the threat of US airstrikes on Iran's cultural sites and 53% support Congress limiting Trump's ability to order military strikes. Elsewhere, anti-Americanism has soared around the world since Trump took office, according to new Pew research published Wednesday.The US's European and NATO allies do not support Trump's latest strikes on Iran, nor pulling out of the Iran nuclear deal. It's notable that Germany's Angela Merkel went to Moscow Saturday to visit Russian President Vladimir Putin to try to defuse the current crisis. She did not go to Washington.So, is the crisis between Iran and the US over? No, it is not.President Donald Trump has announced a new raft of sanctions against Iran. He said in his address Wednesday that, "the US will immediately impose additional punishing economic sanctions … these powerful sanctions will remain until Iran changes its behavior. In recent months alone, Iran has seized ships in international waters, fired an unprovoked strike on Saudi Arabia and shot down two American drones."Related: How Pompeo convinced Trump to kill Soleimani and fulfilled a decade-long goalHe called on Europe and Russia and the rest of the world to pull out of the Iran nuclear deal, while also calling on them to join him in making a new deal with Iran."We must all work together toward making a deal with Iran that makes the world a safer and more peaceful place," Trump said. "We also must make a deal that allows Iran to thrive and prosper, and take advantage of its enormous untapped potential."The extraordinary direct military confrontation between the US and Iran may be over for now, but Iranian leaders are pushing their longtime political agenda.In his televised address on Wednesday, Iran's Supreme Leader Ayatollah Ali Khamenei insisted: "Military action this way, that's not sufficient. What matters is that the presence of America … that should come to an end."And the more moderate President Hassan Rouhani, who was elected in 2013 on his promise to negotiate with the US and improve Iran's relations with the world, backed up Khamenei's message in his own tweet.Also on Wednesday, in his address to the nation, Trump made remarks that seemed to indicate he too was looking for ways to reduce the US military presence in the region. 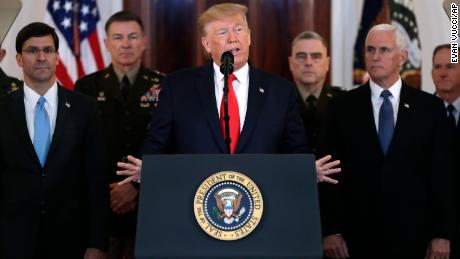 "Today I am going to ask NATO to become much more involved in the Middle East process … America has achieved energy independence … We are independent and we do not need Middle East oil," he said.What message does that send to America's Gulf allies, like the United Arab Emirates and Saudi Arabia who depend on the US's military umbrella? As a precaution, they are dialing down their hostility and dialing up their diplomatic overtures to Iran.US Defense Secretary Mark Esper had told me that the US wanted to deescalate the crisis."We are not looking to start a war with Iran, but we are prepared to finish one. As I've told my many colleagues … over the last few days, what we would like to see is the situation de-escalated and for Iran to sit down with us to begin a discussion about a better way ahead. We think that's the best approach at this point in time."While America's allies — and even its adversaries — caution against starting another war in the Middle East, it is difficult to see where the opening for discussion, negotiation and a diplomatic solution is right now.On Tuesday, Secretary of State Mike Pompeo insisted that the Trump administration's policy would be to confront and contain Iran, but these can be two competing ideas.Either you confront or you contain, Democratic Congresswoman Elissa Slotkin told me. Slotkin, an expert on Shia militias, served three tours of duty alongside US forces in Iraq as a CIA analyst.She also warned that unless the Trump administration draws up a proper diplomatic strategy, war could still be an accidental consequence of its actions."I don't actually question the Secretary of Defense, or even the President's intent that they don't want to get into a war," she told me. "But most wars are not intended."Most wars, you get this tit-for-tat that goes in this spiral, and then suddenly each side has its back up and you can't back down, and you inadvertently fall into war," she said."I think we are at very high risk of doing right now. So, it's not just about intent. It's our actions mean something beyond our control," Slotkin said.So what happens now that the President seems to have doubled down on his "maximum pressure" policy against Iran and continues to enforce harsh sanctions?Iran has called past rounds of sanctions "economic terrorism," and "economic warfare" by the US ever since Trump pulled out of the nuclear deal with Iran, known as the Joint Comprehensive Plan of Action (JCPOA.)Former military and government officials tell me that US intelligence had predicted last year that Iran would react to sanctions by attacking Read More – Source