The 32-year-old has been busy in the studio releasing not one but three EPs after the surprise release of his TDT compilation album earlier this year and now the American rapper isnt taking any rest with the release of his fourth studio album.

Presumably following on from his 2010 mixtape – K.R.I.T WUZ HERE – the recording artist is still striking out on his own as an independent artist after parting ways from Def Jam in 2016.

K.R.I.Ts new album is only his second studio release as an Independent artist.

Sharing the news with his 745K followers on Twitter the rapper posted: Aye yall, its been 9 years since I released “K.R.I.T. WUZ HERE,” and I got one thing to say K.R.I.T. IZ HERE!

Aye ya'll, it's been 9 years since I released "K.R.I.T. WUZ HERE," and I got one thing to say K.R.I.T. IZ HERE! Studio album coming July 12! Its Time! #KRITIZHERE #BIGKRIT #MULTIALUMNI pic.twitter.com/igMsawaw8y

The hip hop star is already said to be working on visuals for the album, teaming up with Child once again for the music video.

Fans of the rapper will remember K.R.I.Ts and Childs last collaboration together for his music video Energy, which saw K.R.I.T embrace his southern roots whilst also speaking knowledge on his growth, independence and knowing your self-worth.

Speaking on the track K.R.I.Ts said: Aint nothing like celebrating my independence.

Shoutout to Camper for being able to match the energy on the production and bringing this full circle…K.R.I.T. HERE!

While the star has yet to announce any collaborations for the new project, K.R.I.T is known for linking up with a hot artist or two.

For his 2017 project, 4eva Is A Mighty Long Time, the Mississippi artist joined forces with a slew of artists including Lloyd, T.I., CeeLo Green, JillRead More – Source 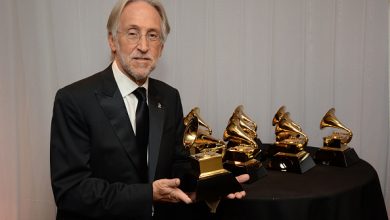