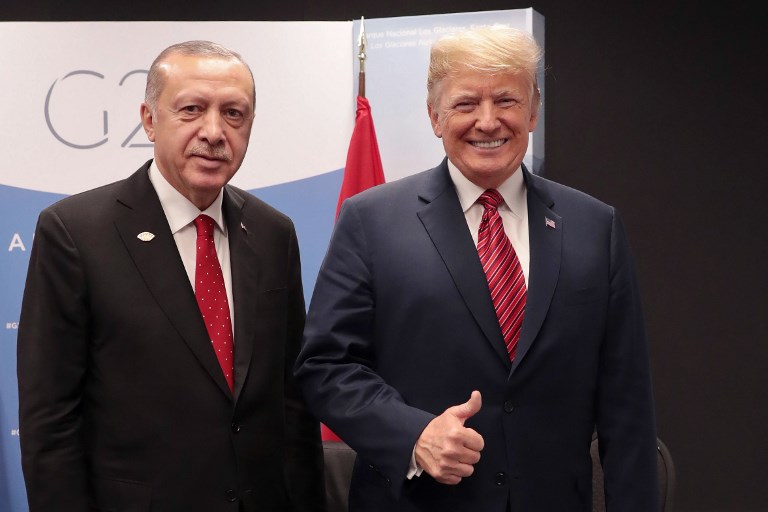 Donald Trump said on Sunday he had discussed Syria and "the slow & highly coordinated pullout of U.S. troops from the area" in a phone call with Turkish President Recep Tayyip Erdogan.

The US president tweeted that the two leaders had "a long and productive call," and also discussed the Islamic State (IS) group and "heavily expanded trade," AFP reported.

Trump shocked US allies on Friday when he announced plans to pull the 2,000 US troops out of Syria, where they have been helping coordinate a multinational fight against IS.

French President Emmanuel Macron criticised Trump's decision, saying "an ally must be reliable". In a sign of the growing diplomatic rift between the two leaders, Macron said: "I deeply regret the decision" by Trump to pull out US troops.

Still, the move was lauded by Turkey.

The decision followed an earlier Trump phone call with Erdogan, who has been pressing for a US withdrawal.

I just had a long and productive call with President @RT_Erdogan of Turkey. We discussed ISIS, our mutual involvement in Syria, & the slow & highly coordinated pullout of U.S. troops from the area. After many years they are coming home. We also discussed heavily expanded Trade.

The Turkish presidency said in a statement: "The two leaders agreed to ensure coordination between their countries' military, diplomatic and other officials to avoid a power vacuum which could result following any abuse of the withdrawal and transition phase in Syria."

Erdogan had said on Friday that Turkey would take over the fight against IS in Syria as the US withdraws.

An American pullout would also allow Turkish troops to move against the hardened Kurdish fighters in Syria deemed terrorists by the Ankara government – but who have strongly supported US efforts there.

A US withdrawal, said Mutlu Civiroglu, a Kurdish affairs analyst, "will open way for Turkey to start its operations against the Kurds, and a bloody war will begin".

Trump's sudden decision sparked turmoil in his administration, prompting the resignation of Defense Secretary Jim Mattis, to be effective on 28 February, as well as of Brett McGurk, the special envoy to the anti-IS coalition.

In announcing his resignation, Mattis distributed a candid resignation letter addressed to Trump that laid bare the growing divide between them, and implicitly criticized Trump for failing to value America's closest allies, who fought alongside the United States in both conflicts. Mattis said that Trump deserved to have a defense secretary more aligned with his views, Reuters reported.

This story. Wow.
On the phone call with Turkey's Erdogan, Trump "quickly capitulated by pledging to withdraw….Caught off guard, Erdogan cautioned Trump against a hasty withdrawal."
By @APDiploWriter & @sgreports https://t.co/Y72oBpeMxI

Trump on Sunday said he would be replacing Mattis two months earlier than specified in his resignation, a move officials said was driven by Trump's anger at Mattis's resignation letter and its rebuke of his foreign policy, Reuters reported.

Several US politicians of both parties rejected Trump's claim that the forces of IS had been defeated, and many in the US military expressed alarm and dismay at the thought of suddenly abandoning their Kurdish allies.

Criticism continued on Sunday television news shows, according to the Wall Street Journal:

The smell of betrayal hangs over Trump's Syria withdrawal

“I am deeply, deeply concerned and I oppose strongly the presidents decision apparently to withdraw troops from Syria,” Representative Liz Cheney, a Republican from Wyoming, said on CBS, also mentioning Trumps plans to remove about half the US troops in Afghanistan.

“These two decisions would be disastrous,” Cheney said. “They would really, in many ways, hand the victories to our enemies to Iran, to ISIS in Syria, the Taliban, al Qaeda in Afghanistan.”

Under pressure, Trump sought assurances from Erdogan on fate of Syrian Kurds