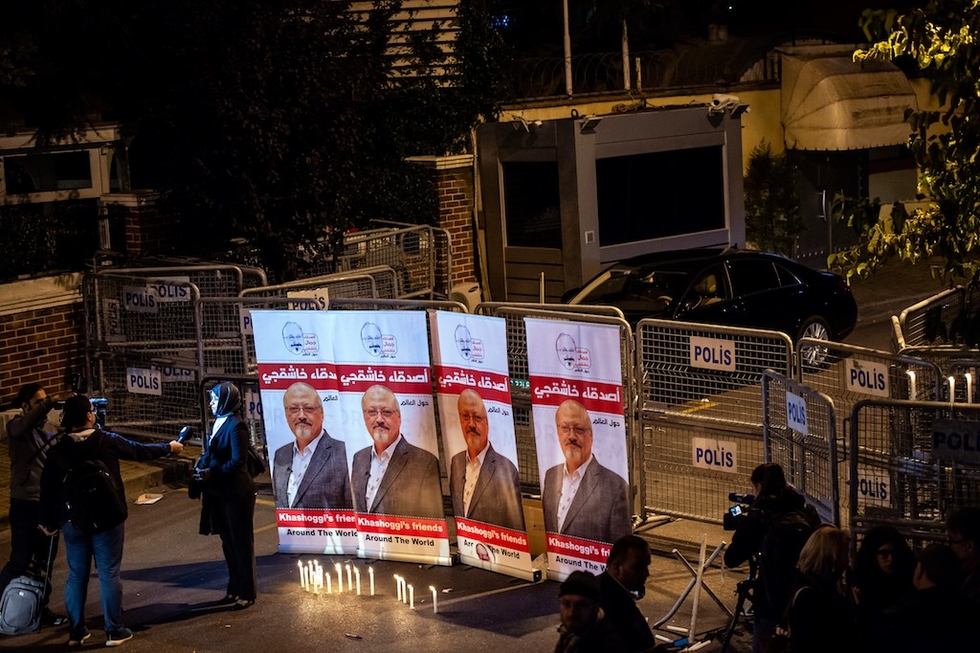 Turkish President Recep Tayyip Erdogan said on Friday that he had "more evidence" relating to the murder of Saudi journalist Jamal Khashoggi, and demanded that Saudi Arabia reveal who gave the order for him to be killed.

Speaking in parliament, Erdogan said Riyadh must disclose the identity of the "local cooperator" who was purportedly responsible for taking Khashoggi's body from Saudi agents after he was killed in the consulate in Istanbul on 2 October.

Friday's speech struck a far stronger, more direct tone than one Erdogan gave earlier this week, and laid down a clear line that Turkey will pursue the murder investigation until the end and will not be persuaded let it go.

The New York Times reported earlier this week that Saudi envoy Prince Khaled bin Faisal offered a package of inducements, ranging from ending its embargo on Qatar to helping Turkey's economy – to drop the case.

According to the report, Erdogan told associates that he rejected the offer and had described it as "a political bribe".

He added they had "more evidence in our hands, but tomorrow is another day… we are not in a hurry".

Turkish media reported on Friday that investigators had searched a well in the house of the Saudi consul-general, but had found no DNA evidence in the water.

On Thursday, CIA director Gina Haspel reportedly briefed US President Donald Trump on evidence of the murder of Khashoggi.

In a visit to Ankara earlier this week, Haspel was played the audio recording of the killing the Turkish government has repeatedly referred to but have not yet made public.

Although his administration has been seen as close to Crown Prince Mohammed bin Salman, Trump has in recent days indicated that he does not believe the kingdom's claims that a rogue group was behind the killing, and has insinuated that the crown prince would have known what was happening.

Questioned in a Wall Street Journal interview about MBS's possible involvement in the killing, Trump said: "Well, the prince is running things over there more so at this stage. He's running things and so if anybody were going to be, it would be him."

In contrast, Russia said on Friday that they had no reason to doubt the Saudi royal family when they said they were not involved in the murder.

"No one should have any reasons not to believe them," Kremlin spokesman Dmitry Peskov said on Friday, adding that the Kremlin welcomed the investigation into the murder.

Khashoggi's son Salah left Saudi Arabia on Thursday for Washington DC after having earlier been prevented from leaving the country by a travel ban, sources close to the family told Reuters.

He and his family joined his mother and his three siblings in the US capital, according to the sources, who spoke on condition of anonymity.

Several hours after their arrival, a deputy spokesman for the US State Department said Secretary of State Mike Pompeo told Saudi leaders in Riyadh earlier this month that "he wanted Salah Khashoggi returned to the United States".

"We are pleased that is the case," spokesman Robert Palladino said.

Khashoggi, a dual US-Saudi citizen, had his passport restricted by the kingdom earlier this year.

Pompeo: US seeks to ensure Turks dont slaughter the Kurds in Syria

‘This will not happen’: Mo Salah decries Egyptian plan to export cats and dogs

US and France considering new military strikes against Syrian government