Since the election of Imran Khan as Pakistan's 22nd prime minister, there has been a near frantic diplomatic shuttling between Tehran, Riyadh and Islamabad. That the Saudis and Iranians are interested in Pakistan is nothing new. Both Tehran and Riyadh have engaged in decades-long rivalry to influence Pakistan.

However, the urgency in both capitals to court the new Pakistani leader comes at a time when – for the first time in the history of their relations – neither Iran nor Saudi Arabia have a political pawn in Islamabad that they can manipulate.

Pakistan's army under the current chief of army staff, General Qamar Javed Bajwa, who was appointed in 2016, has made sure Pakistan continues its support of the GCC countries but without prejudicing its relationship with Iran.

Last November, General Bajwa became the first Pakistani army chief to undertake an official visit to Iran in more than 30 years. The visit was described by Iranian media as historic.

Previously, former army chiefs, like General Raheel Sharif and General Pervez Musharraf, had travelled to Tehran but not on an official military visit. The Pakistani military has always held the cards when it comes to Pakistan's strategic foreign policy.

General Bajwa has managed to mend ties with Iran during his two years at the helm. He also brought the UAE back into Pakistan's favour. Before Bajwa, relations between UAE and Pakistan had been very cool due to the latter's refusal to send troops to Yemen as part of the war effort led by Saudi Arabia.

While General Bajwa has made it clear to the Saudis that Pakistan's army shall defend Saudi Arabia from any outside aggression, he, nonetheless, maintained a neutral stand over the Qatar crisis when both Saudi Arabia and UAE, along with Bahrain and Egypt, imposed a blockade on Qatar in June 2017.

The Bajwa Doctrine in the Middle East, has meant that Pakistans military can be an equal help to regional powers, without taking sides and also provide an avenue for mediation where needed

This also meant that General Bajwa made the Saudis aware that the Pakistan Army will not take sides in the Gulf crisis, despite heavy pressure from the Saudis on Pakistan to take part in the blockade against Qatar. Instead, and in a clear message to Saudi Arabia, Pakistan has increased its trade volume with Qatar since the blockade. 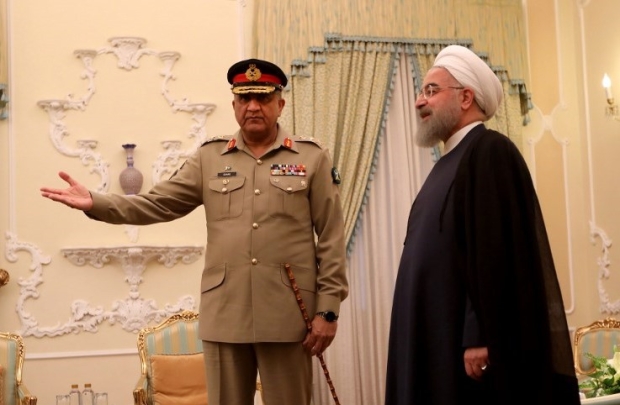 So, the Bajwa Doctrine in the Middle East has meant that Pakistans military can be an equal help to regional powers, without taking sides, and also provide an avenue for mediation where needed.

In his first major foreign policy speech, Khan said that he would like Pakistan to play a leading role in mediating between Riyadh and Tehran to bring about conflict resolution in the Middle East.

No foreign patrons or alliances

The Saudis had viewed the former prime minister, Nawaz Sharif, as their puppet, while they perceived his predecessor, Asif Ali Zardari, as Iran's puppet. With the coming of Khan, the four decade-long hold of the two-party system has been broken and – unlike the Bhuttos, Zardaris and Sharifs – he has no foreign patron or alliances.

Khan has set a precedent by refusing a Saudi request to pardon Nawaz Sharif and send him to Riyadh.

At the same time, following the Pakistan Army's playbook, Khan has reached out to Iran, and has held public meetings with the Iranian ambassador to reassure Tehran that Pakistan and Iran are brothers. The Iranian foreign minister, Javed Zarif, was the first foreign dignitary to pay Khan a visit.

Khan also accepted an invitation for a state visit to Tehran. Last month, he met with the leading Shia religious leaders of Pakistan to assure them of a balance in relations between Saudi Arabia and Iran. He said that Pakistan was on Iran's side against the American sanctions and pressure on Tehran.

Shortly after Khan took power, the Saudis sanctioned a loan to Pakistan via the Islamic Development Bank. They were also quick to dispatch their minister of information with a direct invitation to visit Riyadh. The Saudi crown prince, Mohammed bin Salman, made a promise of heavy investments in Pakistan.

Bruce Riedel, a former adviser to former US President Barack Obama and a CIA veteran, has been a regular observer of the Pakistan-Saudi-American axis. He has been arguing for over a decade now that the Saudis view Pakistan as pivot for their own security – there is simply no way the Saudis can afford to lose Pakistan as a strategic partner.

This compliments a remarkable insight into Pakistan by the former head of Saudi Intelligence, Prince Turki bin Faisal, whereby he said with confidence that the Pakistani Army was the ultimate decision maker, and that Pakistani politicians "should get their act together". Perhaps now, the politicians have gotten their act together which is making the Saudis nervous.

Pakistan now has a civilian leader who is on the same page with the military, thereby making it harder for both Saudi Arabia and Iran to blackmail Islamabad, simply through financial incentives of free barrels of oil or a pipeline through the desert.

This is a key reason why both Saudi and Iran are seeking to court Imran Khan's favour.

Pakistan's dilemma: Can Imran Khan afford to tilt towards Iran?

Underlining Khan's neutrality – of course – is the performance of the Pakistani military in its own war on terror. It is a widely acknowledged fact that the Pakistan Army has clearly won its battle against the terrorist insurgents that once ran havoc in the north west of Pakistan. For the first time in over a decade, the Pakistani military is able to look beyond its borders as a result of the operations on the Afghan frontier.

Simultaneously successful defence pacts with Russia, Turkey and China have made Pakistan far more confident than it was in the 1990s or the immediate aftermath of the terrorist attacks of 9/11. Pakistan has also played a part in helping the Iraqi military defeat Islamic State (IS) group. In a rare public statement, Baghdad thanked Pakistan for its assistance in fighting terrorism in Iraq.

In Syria, Pakistan has kept a strongly neutral stance, making it perhaps the only major Organisation of Islamic Conference that has not taken sides in the war, while at the same time being militarily allied with all major intervening states, i.e. Turkey, Iran and Saudi Arabia.

This successful triangulation means the mad rush and revolving door of Saudi and Iranian diplomats in Islamabad will continue as both countries seek Pakistans military and diplomatic support to mediate in the myriad of conflicts raging across the region.

– Kamal Alam is a visiting fellow at the Royal United Services Institute (RUSI). He specialises in contemporary military history of the Arab world and Pakistan. He is a fellow for Syrian affairs at the Institute for Statecraft, and is a visiting lecturer at several military staff colleges across the Middle East, Pakistan and the UK.