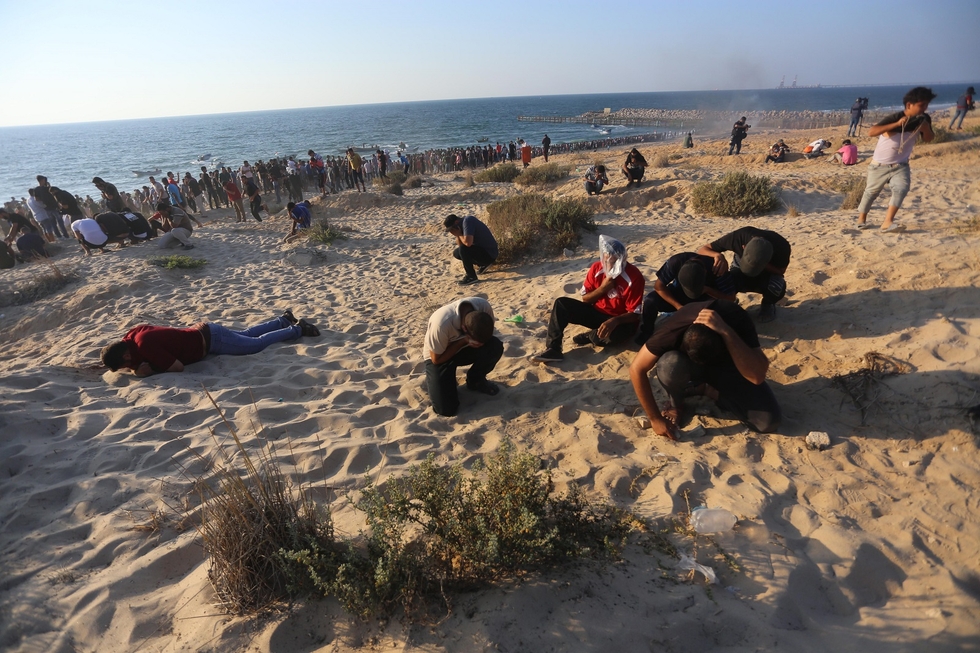 Israeli soldiers shot dead a Palestinian man and wounded dozens of others on Monday as they participated in a Great March of Return demonstration in the Gaza Strip, health officials in the besieged coastal enclave said.

The officials said 90 people were hurt, 10 of them by live fire. Since Gazans began holding protests on 30 March, the Israeli army has killed at least 187 Palestinians.

The protests call for an end to the 11-year Israeli blockade on Gaza and for Palestinian refugees' right of return to the lands that their families fled during the establishment of the state of Israel in 1948.

The majority of Gaza's population are refugees whose families were among the 700,000 Palestinians who had to flee or were forcefully expelled from their homes.

Israel maintains a crippling blockade of the Gaza Strip, which critics say amounts to collective punishment of the impoverished area's two million residents.

Around 10 Palestinian boats sailed off the coast to challenge the blockade on Monday, drawing warning shots from the Israeli navy. There were no reports of Palestinian casualties.

The Israeli military said "thousands" of Palestinians "rioted" on beaches north of the coastal enclave, while Palestinian vessels also staged a "riot at sea" close to the maritime border imposed by Israel.

Despite Israeli violence, the protests have persisted and become more frequent over the past month.

Samaher Ibrahim, a mother of eight, told MEE at a protest on Friday that fear of dying is not a deterrent to her or other demonstrators.

"This is about the entire Palestinian people, not just us as individuals," she said. "If each one says 'I dont want to go,' then who will resist the siege?"