But in the dust of a front-line outpost outside the Syrian town of Manbij, that is the war that Lt. Gen. Paul Funk, commander of the anti-ISIS coalition, finds himself in as he visits US Special Operations Forces supporting their Syrian Kurdish allies.One kilometer (less than a mile) away are Syrian rebels backed by Turkey, which considers the Syrian Kurds around Funk to be terrorists. Turkish President Recep Tayyip Erdogan has demanded that the US Special Operations Forces that Funk commands leave Manbij immediately. But here they remain, their commanding officer giving a handful of media the first access to their highly controversial patrols that have now pitted NATO allies against each other.An hour before Funk arrived, the nearby Kurdish checkpoint was harassed by Syrian rebel gunfire — something that happens several times a week. "Any time our soldiers are threatened, that worries me," Funk said. "But that's what they do. … They will defend themselves."He agrees that being threatened by a NATO ally is, by definition, "bizarre." "I would say that the people who fought to take Raqqa back from ISIS are heroes, no matter what nationality they were, no matter what their beliefs were," he said of the Syrian Kurds.Yet complexities in this multisided fight have only multiplied since Turkey launched Operation Olive Branch — the invasion of a northwestern enclave of Syria, held by Syrian Kurds, known as Afrin. The operation has proceeded slowly, with casualties among Kurdish military and civilians, and in the Turkish military. It has also caused an estimated 1,000 Syrian Kurdish fighters who were assisting in the fight against ISIS' remnants in Syria's east to move toward Afrin, according to Kurdish and US officials. The greater concern for US policymakers here is that the more Turkish forces attack Afrin and these Syrian Kurds, the less resources its coalition has to finish clearing ISIS from the pocket of land it retains some control over along the Iraqi-Syrian border."In terms of a military mission, maintaining your focus on the enemy is the most critical piece," Funk said.Asked what happens if the United States does as its NATO ally Turkey wants, and leaves, Funk said, "I think we let ISIS go. This force is stopping terrorists from going back (into) Turkey, into Europe. This force is in position to make sure that doesn't happen." He said his biggest concern on the Manbij front line he was visiting was "miscalculation." He repeatedly urged dialogue with Turkey and pledged to de-escalate if the two forces here ended up in open confrontation.A local Syrian Kurdish commander, Abu Adil, added: "The coalition's goal was to finish ISIS in the area, but Turkey with (its) actions and statements is giving life to ISIS again."Turkey's counterargument often highlights how the Syrian Kurds the United States backs are allied with Turkish Kurds, a group both Turkey and the United States denounce as terrorists. 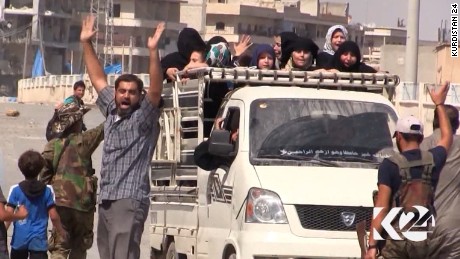 While US officials have strenuously denied that Turkish Kurds fought in and around Raqqa to defeat ISIS with the US-backed Syrian Kurds, CNN witnesses often met fighters who spoke Turkish as the anti-ISIS fight progressed around the terror group's former self-declared capital. Many analysts have noted that the Syrian Kurds were the only force who presented a potent, supportable threat to ISIS when the fight got underway in 2015, and they were a pragmatic rather than ideal choice for their American partner.Yet the Turkish threat against these Syrian Kurds has extended to Turkey threatening to attack the nearby town of Manbij, close to where Funk visits.American Special Operations Forces walk with CNN calmly around the town, through vegetable markets overflowing with produce and customers. Life is trying to get back to normal here, and commerce has massively increased since ISIS was kicked out by the Syrian Kurds in August 2016. A hotel is trying to open. Yet local officials tell us the fear of Turkish military action is unsurprisingly slowing economic development. Despite Manbij's optimistic present, for many locals, the pain of having to fend for themselves in the seemingly endless battlefield of Syria is still fresh."There was a time when everyone abandoned us," Manbij legislative council member Azzab Al-Aboud said. "The coalition when ISIS was here, and the regime even though it's part of Syria. We are against the idea of separation (from the rest of Syria), but when we were in need — when our bothers and children were in need, when women were in need — no one gave us a hand."