Israel’s High Court has ruled that the Israeli military can’t keep the bodies of slain Palestinians for prisoner and body swaps. Instead of banning the widely-condemned practice, however, the court gave the Israeli government time to enshrine it in law.

In ruling that bodies cannot serve as bargaining chips, the court acted on a petition filed by families of deceased Palestinians whose remains have been retrieved by the Israel Defense Forces (IDF), most recently in October, when IDF destroyed an underground tunnel leading from Gaza to the Israeli city of Negev. Five bodies of Islamic Jihad members were discovered by the Israeli forces at the time and have been held since then.

“The State of Israel, as a nation of laws, cannot hold on to corpses for the purposes of negotiations at a time when there is no specific and explicit law that allows it do so,” the court stated in its decision, as cited by the Times of Israel.

The court, however, did not completely forbid the widespread practice, decried by human rights groups as violating both Israeli and international humanitarian law. Instead, it gave the Israeli government six months to enshrine the procedure into law.

“If a law is not made before this time, the bodies of the terrorists will be returned to their families,” the court added.

The refusal to hand out bodies of deceased Palestinians has been criticized by the UN Committee Against Torture (CAT), which urged Israel to release the bodies “as soon as possible” and to “avoid that similar situations are repeated in the future” in its report on Israel in June 2016.

Nine bodies are currently being held by Israel. Since 2015, at least 161 bodies of killed Palestinians have been seized by Israel, according to the Palestinian al-Haq human rights group.

“We cannot give Hamas gifts,” Israeli Prime Minister Benjamin Netanyahu said as he vowed to call a Cabinet meeting on Sunday to push for legalizing body exchanges in the wake of the High Court's decision.

Security Minister Gilad Erdan said the court’s stance “makes it more difficult for security forces to create deterrence and fight incitement,” calling on the lawmakers to take swift action to formalize the practice and give the law enforcement “clear authority” not to return the remains.

Tourism Minister Yariv Levin went even further, launching a verbal attack on the High Court, accusing the three-judge panel of “rewarding terrorists” and being guided by a “distorted scale of values in which lowly murderers and their families are granted privileges” at the expense of the IDF. 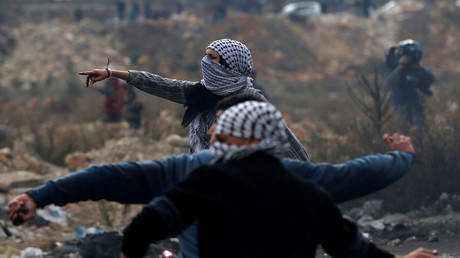 Israel wants to exchange the bodies found following the demolition of the underground tunnel for the remains of two Israeli soldiers, Hadar Goldin and Oron Shaul, who were captured during the 2014 war between Israel and Hamas, as well as two civilians, allegedly being held prisoners by the militant group.

However, the negotiations, that have been reportedly mediated by Egypt, have stalled as Israel refused to meet Hamas’ demand to free Palestinians held in Israeli jails.

Despite the international outcry over its degrading treatment of Palestinians' bodies, Israel is considering the introduction of a separate new law that would allow police to withhold bodies of Palestinian assailants until their families agree to certain restrictions on funeral procedures. Security Minister Erdan, who has endorsed the bill, argued that mass funerals often turn into rallies, inciting further attacks on Israeli forces.

”More than once we have seen people holding signs and heard speeches and calls in support of terrorist attacks, or to take action to carry out further attacks,” he said in November.

IDF soldier shoots 2 neighbors, attacks 3 with ax, after confiscated gun given back by accident

Tartan weaving in the Highlands has moved a step closer