Russia overtook China in the number of confirmed coronavirus cases on Monday, when its tally climbed above 87,000, as pressure rose on the government to consider easing lockdown restrictions for businesses to help shore up the rattled economy.

Russia, the world's largest country by territory, has been on lockdown since President Vladimir Putin announced the closure of most public spaces in late March. These measures are due to expire on April 30 and Putin has not yet said if he plans to extend them.

Anna Popova, the head of Russia's safety watchdog Rospotrebnadzor, told state television on Monday that, in her view, restrictions should be in place until May 12.

Earlier Prime Minister Mikhail Mishushin asked his government to submit proposals by Thursday to ease some of the restrictions on businesses. Many firms have warned that they risk going bankrupt if the lockdown continues, and thousands of workers have been laid off.

Mishustin told an online government meeting that as soon as the situation started to improve "we would need to consider a step-by-step cancellation of restrictions on certain companies… operations".

Moscow plans to open two new hospitals, with 1,500 beds each, in the defence ministry's Patriot museum and in the Crocus exhibition centre, once a spot for lavish concerts, business daily RBC reported on Monday.

Russia, one of the world's top oil and gas exporters, is particularly vulnerable to the spread of the coronavirus at production sites. Most are located in remote areas accessible only by air, meaning the workers must be in close proximity, increasing their risk of infection.

Citing local officials, news agency Interfax said on Monday that an airport in Sabetta, in the northern Yamal peninsula, had been shut down for quarantine after cases of the new coronavirus were detected at the Yamal LNG production site controlled by Novatek.

A total of 14Read More – Source

In Europe, Covid-19 puts idea of universal income back into welfare debate 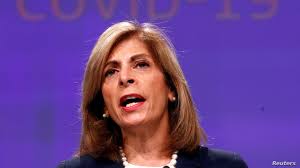