The music stops. The chorus of artillery and shelling reasserts itself. Then comes a melancholic silence. "You see the fear in their eyes, you see them looking up to check if there are any planes," said Bilal al-Shawa of the Hurras Network, a child protection charity. Hurras has organized this activity at a school in the town of Maarat Misreen in Idlib province, Syria's last opposition enclave. "The children should be thinking about playing, about studying. Our entire focus right now is how to we avoid having them hear something scary," al-Shawa told CNN.There is little anyone can do to protect the children physically, so al-Shawa and his organization are trying to keep the kids healthy mentally.In areas of Syria controlled by rebels or Turkish troops, Hurras runs weekly psycho-social support sessions focusing on building children's resilience and coping skills, as well as one-on-one support for those who need it. The charity also works with parents, to help them learn skills to support their children, and reduce harm at home. 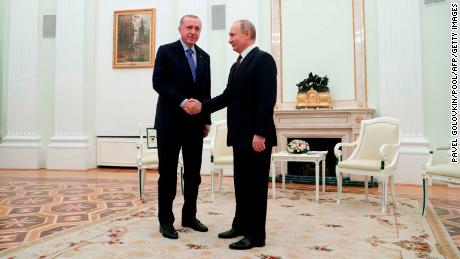 Yet Hurras's own staff are subjected to the same violence and displacement; the same life on the run as the children they are trying to treat, adding many more challenges. Supporting these children is proving to be a monumental effort in a civil war that has been raging for nine years. A ceasefire brokered by Turkey and Russia last week is a temporary band-aid, with no real solution to end the civil war in sight. There have been lulls in the fighting before, but time and again the war continues to ravage the most vulnerable. There is little hope here in Idlib that the ceasefire will last. In December the Syrian regime backed by Russia and Iran launched a massive offensive that has since displaced nearly a million people, some 80% of them women and children. 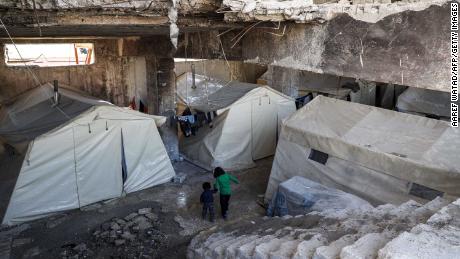 A survey released on March 5 by the International Rescue Committee (IRC) tells the story of the trauma of Idlib's youngest in numbers. The report states that 62% of parents and caregivers said their children now often cry for unknown reasons, or specifically in anticipation of conflict activity, when planes fly overhead, for example. Some 46% said that their children appear to be unusually sad. More than 30% reported that their children are becoming more aggressive towards others, and more than 20% of caregivers said their children have started to isolate themselves. Eight-year-old Dalaa doesn't smile like the other kids in the schoolyard, her gaze feels distant. She gingerly avoids putting pressure on her wounded left foot. For all the joy in the yard right now, Dalaa appears trapped in a memory that she can't wrench herself free from. 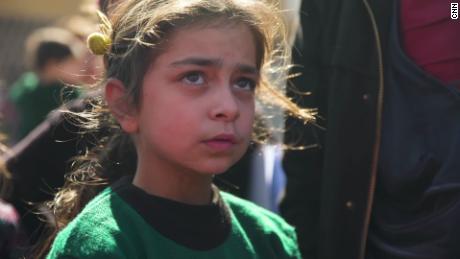 A week earlier, a rocket slammed into the school next door. Dalaa's family had been living in the school building, which had been converted into temporary shelter for displaced people, for a month before the attack. It was hit in the early evening, as children were playing outside. Dalaa saw the plane circling, but thought that it would strike far away."I was eating an apple with my sister and then the rocket hit us," she remembered. "I looked and I could only see dust. I was screaming for my siblings, I saw blood on the floor and then I got dizzy," she said. After the strike on the school, the family moved into the school next door, which is a temporary shelter, as well as the venue for Hurras' session."Of course I wanted to flee further away, but how much further can we go?" said Dalaa's father Abdul Karim. "How am I supposed to protect them? Only God can," he said.Dalaa was one of the lucky ones. Seven children died that day, as multiple strikes hit schools and residenRead More – Source

500,000 meals distributed among pilgrims in Madinah