Protests erupted in several cities across the country Friday following Thursday's announcement by Iran's National Oil Company (NIOPDC) of at least a 50% increase in gas prices. In the province of Sirjan at least one person has been killed, the region's government has said.Videos published by official Iranian media show protesters blocking main roads and causing traffic jams. But journalists in Iran and international news agencies report the situation is much worse, citing clashes between protesters and riot police, damage to public property, and tires and garbage burning on the ground. Gunshots were also heard. Press TV reported that Rahmani Fazli has acknowledged people's right to protest within the framework of the law, but warned protesters against attempting to undermine the country's security."Under any circumstances, the country's security and the people's calm are the top priority for the law enforcement and our security and military forces," Rahmani Fazli is reported to have said. 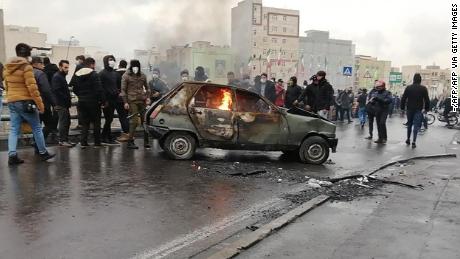 'The decision must be implemented'

Iran's Supreme Leader Ayatollah Seyyed Ali Khamenei said Sunday he supported the government's decision to raise gas prices, Press TV reported, but urged officials not to increase the price of other commodities."If the heads of the three branches of the government make a decision [about it], I will support," Khamenei is reported to have said. "The decision must be implemented."According to Reuters, state television reported that Khamenei blamed opponents and foreign enemies for "sabotage," saying: "The counter-revolution and Iran's enemies have always supported sabotage and breaches of security and continue to do so." The price hike reflects an increase ranging from 50% to 300%. The price of a gallon of regular gas jumped to 57,000 rials ($1.71) from 40,000 rials ($1.20) per gallon, while the monthly subsidized ration for each private car has been reduced from 70 gallons to 16 gallons, after which the price of gas rises to 114,000 rials ($3.42) per gallon. 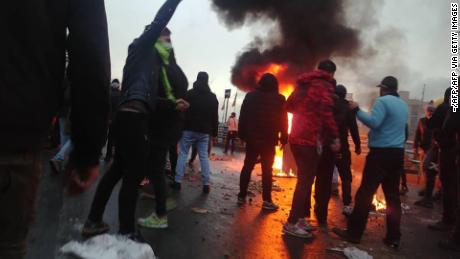 Iran, which is a founding member of the Organization of the Petroleum Exporting Countries (OPEC), currently has estimated proven crude oil reserves of 155.6 billion barrels, according to energy giant BP. Earlier this month President Hassan Rouhani announced a vast oil field, containing an estimated 53 billion barrels of crude oil, had been discovered, which would make it Iran's second-largest oil field.The government says the increase is in the interest of the country and arRead More – Source

Trump: Egypt has never had a better relationship with the US than now