Demonstrations have engulfed various parts of Lebanon for three days. Many protesters called for the resignation of the government and demanded the "downfall" of a political class that has ruled the country since the start of its 15-year civil war in 1975. At least 136 demonstrators have been detained since protests began on Thursday night, Legal Agenda, a non-governmental organization helping to represent arrested protesters, told CNN. Around 70 people were arrested on Friday night alone, a security source from the Internal Security Forces told CNN. Nearly all of the detained protesters were released on Saturday, according to Legal Agenda and the security source. But several of those released appeared to have sustained significant injuries, according to eyewitnesses outside one of the police stations that held the protesters and photos reviewed by CNN. One man had lacerations on his back, which may indicate that he was dragged on the street, and a head wound, according to photos. "The lawyers monitoring arrests saw signs of beatings and ill-treatment on several of those released," said Legal Agenda lawyer Ghida Frangieh. "Most of them reported they were beaten during the protest when they were arrested, not during their detention." Frangieh said the army soldiers and security forces had used "a disproportionate use of force" on protesters. On Friday evening, the protest site outside Beirut's governmental headquarters descended into a cloud of smoke as security fired scores of rounds of tear gas at the large crowd. Most of the protesters fled the scene, but tens of demonstrators returned, setting parts of the area on fire. Security forces and army soldiers then swept through the parts of downtown Beirut, arresting protesters. According to two eyewitnesses who spoke to CNN, security forces also attacked bystanders on the scene. "The army had blocked the road that we were on, when a man on a motorcycle was driving towards them," said demonstrator Rayan Kabbara. "Then a group of Internal Security Forces pushed the guy over, and started to beat him with batons. We heard him screaming." "He was driving so calmly when suddenly they went running after him," said another demonstrator on the scene, Mohammad Shibly. 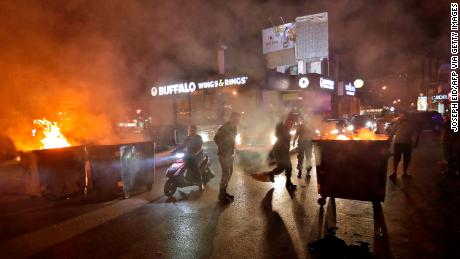 On the same street, another man in a motorcycle was stopped by security forces and tried to flee. Around 10 security forces pushed him over and started to beat him, according to the witnesses. "It was a really frightening sight," said Shibly. The ISF security source said police officers who beat protesters will be held accountable, and added that they acted of their own accord. "If there have been any violations then we need to hold the violators accountable," the source added."After hours and hours of enduring unjustified beatings and injuries (from protesters), there are members of the security forces who lost their nerves," said the source. "But this happened despite the orders of their officers, which is that (protesters) need to be treated in accordance to human rights standards." CNN journalists on the scene saw around five or six protesters beating a riot police officer on Friday night. According to the ISF, 112 personnel have been injured by protesters since Thursday night. CNN also saw security forces holding a protester in a choke-hold. 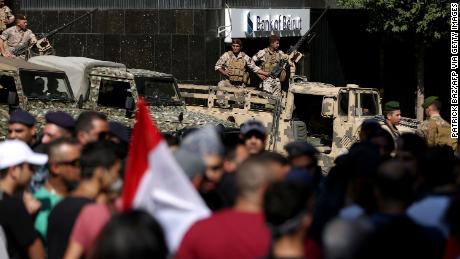 Protesters filled the streets of several cities across the country Saturday. Calls for "revolution" rang out from Beirut's downtown area on Saturday, as protesters chanted against prominent politicians across the country's political landscape. Lebanon's multi-confessional makeup has meant that protesters have usually organized around sectarian lines. But declining economic conditions have drawn the ire of many Lebanese across the sectarian divide, Read More – Source

Covid-19 surges across Middle East and North Africa, in nations both rich and poor