Stuart Highways (Ricky Champ) temper is set to be tested in a big way in EastEnders as drastic action from Kathy Beale (Gillian Taylforth) puts recovering addict Rainie Branning (Tanya Franks) at serious risk. And Kathy will soon be faced with Stuarts dark side as he brutally attacks her.

Rainie has been struggling to wean off painkillers and Stuart thought that he had succeeded in helping her by locking her up and forcing her to go cold turkey. However, worried fans have watched as she secretly pocketed cash and headed to the chemist for another fix.

A recent trailer previewing whats ahead in Walford showed Max (Jake Wood) angrily branding Rainie an addict as he takes steps to stop her from having contact with Abi. And later on, Rainie is seen desperately scrambling around on the ground, proving just how in the grips of her addiction she is.

Kathy, who had previously been blackmailed by Rainie into supplying pills, will end up placing a huge test in Rainies path to gauge whether she is suitable to have Abi in her care – but this will lead to Stuart losing his cool when he blames Kathy for the state of Rainies situation.

Thrusting a bag of drugs in Kathys face, he will angrily rant at her for her actions before viciously grabbing her and pinning her against the wall, leaving her terrified. Its clear how protective and in love with Rainie Stuart is but he takes a step too far by losing so much control and showing such aggression to Kathy. 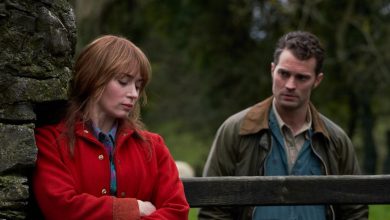 Saoirse Ronan thanks mum for protecting her from seedy Hollywood: I was never a victim