The infamous Auschwitz death camp, which has long since become a magnet for souvenir hunters, saw another attack on its relics – this time perpetrated by an American citizen, who attempted to steal a piece of railway tracks.

The 37-year-old American tourist who was on a visit to the Auschwitz-Birkenau concentration camp was caught red-handed as he attempted to walk away with a part of the rail tracks that witnessed Holocaust victims being brought there in cattle cars. The man was caught in the act by the site's security guards, who then promptly notified the police. 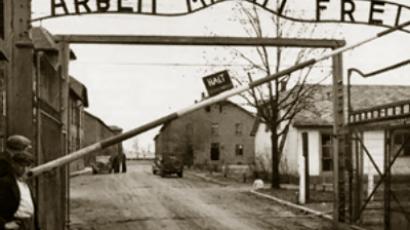 A spokesperson for the Oswiecim town police, where the former death camp is located, said that the failed thief admitted his ill intent and has been released pending charges over an attempt to steal an item of cultural importance, which is punishable by up to 10 years in prison.

The notorious site has been turned into a museum, and is struggling to protect its many historic artifacts from rampant pilfering by tourists. In the past few years, the camp has sustained a number of attempts by its visitors to take away a memento, with various degrees of success. The list of items is rather long and expands every year.

In July last year, two Hungarian tourists were charged with an attempt to steal bricks from the former crematorium, where Jews and other POWs burned to death during the WWII. The pair were caught red handed and prevented from taking the bricks out in a bag.

A year earlier, an Israeli student was more lucky in passing through security, and managed to take a number of items, such as a metal screw, small bowls and even a sign warning visitors against stealing, to Israel, where she proudly displayed them at a college graduation exhibition.

Dominic Grieves Brexit amendment gives control back to MPs – but what will they do with it?