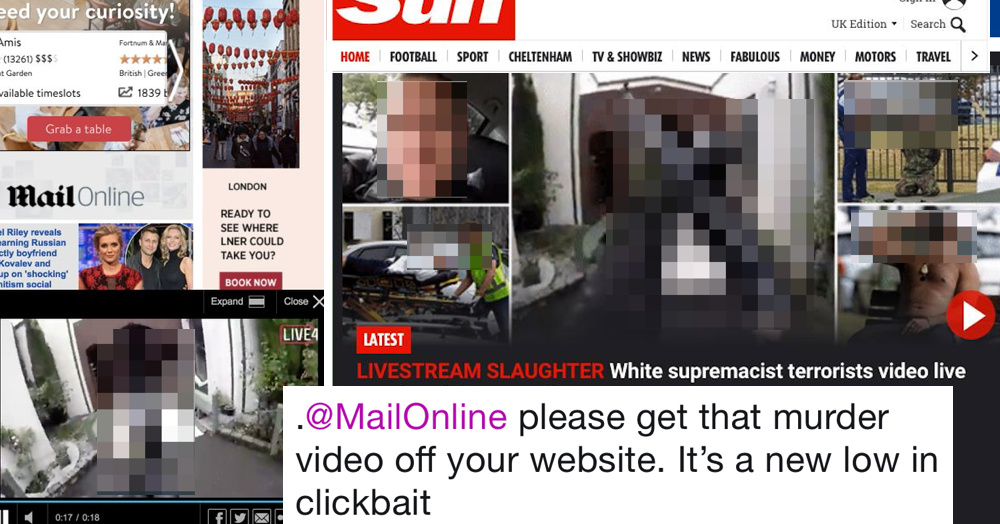 People have been calling out the tabloids use of horrific video footage of the New Zealand attacks in which 49 people died and nearly 50 people were wounded.

Daily Mirror and Daily Mail running edited parts of the Christchurch terrorists first-person video on their websites, pop-ups, ads around them.

Daily Mail's shows him walking to mosque door and aiming to begin attack.

The Mirrors shows him shooting at people. pic.twitter.com/aLJLQI8fB4

The Suns homepage is a *gif* of the terrorists first-person video, surrounded by advertising, just looping. pic.twitter.com/nYM1Ei5okz

The Daily Mail is also hosting the terrorists manifesto, again the video pop-up and advertising around, allowing readers to *download it* directly from their website. pic.twitter.com/FYBJ0ICidq

.@MailOnline please get that murder video off your website. Its a new low in clickbait

And you too @DailyMirror ??! I thought better of you

And heres what people were saying about it today.

We have created a technology that normalises, mobilises and glamourises extremism. It can deceive murderous fuckwits into thinking they are heroes. The Mail here are doing exactly what this murderous fuckwit would want. https://t.co/FDOvubmpXK

The Mail has always been part of the problem – they'll have the usual shock and outrage on their pages, but they'll never accept their complicity.

@IpsoNews can you please look into this as a matter of urgency and ensure this content is removed. Not only is this harrowing, but (a) this is an going police investigation with potential wide reaching links and (b) this kind of widespread propaganda IS the problem.

The Mail getting plaudits recently for not being as vile under new editor as it was under Dacre. One step forward fifty steps back. Disgusting. But a joy to any of their fascist inclined readers and now doubtless being shared excitedly by many https://t.co/5GMLSGiet6

Jesus Christ, the Mail has it autoplaying on their front page with no warning even though it violates their own "editors' code."

FFS. Unbelievable. I stand with New Zealand. So should you, @MailOnline. https://t.co/hDrQVEHObY

And it prompted people to get in touch with the companies whose adverts appeared around it.

What advertisers were on the page? They should know