The first half of the word is easy to decipher. Snaps is a Scandinavian spirit (related to German Schnapps) often drunk with a meal on special occasions, which has been made in Sweden since the Middle Ages when monks produced the alcohol for medicinal use.

En visa meanwhile means 'song'. The word is linked to the verb visa (to show), and in general usage you're more likely to hear the modern variants en låt or en sång, but visa has survived in some set phrases and compound nouns like snapsvisa, which literally means 'snaps song'.

The snapsvisor or drinking songs are uniquely Swedish. They are thought to have originated around a century ago, probably with their roots in student drinking culture, but today are enjoyed by adults of all ages, so don't be surprised to see your grandparents-in-law singing along with the youngsters at the julbord.

In total, more than 10,000 different drinking songs have been recorded in Sweden, according to the Spritmuseum in Stockholm, which each year organizes a competition for new drinking songs to help keep the tradition thriving. They are sung at all kinds of festivities that feature snaps, from Christmas to Midsummer to birthday and graduation parties.

Probably the most widely known is Helan går, which is one of many songs that celebrate the drink itself, while others poke fun at the Swedes' Nordic neighbours, celebrate other parts of Swedish culture or food, or simply describe what fun it is to drink and get drunk. Another of the popular tunes, Hej tomtegubbar, is confusingly also played as a Christmas party tune for children (in fact it only became a drinking song around 100 years after it was first written).

Everyone started to sing drinking songs at the Christmas buffet

Do you have a favourite Swedish word you would like to nominate for our word of the day series? Get in touch by email or if you are a Member of The Local, log in to comment below. 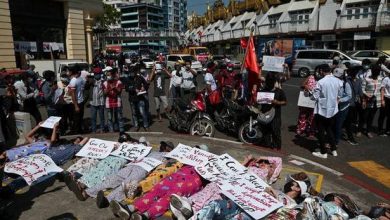 Mourning the death of a young anti-coup protester, demonstrators return to Myanmar streets