A YouTube sensation has become the unlikely contender for Christmas number one with his debut single dedicated to sausage rolls.

Dad blogger LadBaby is poised to steal the titles from the likes of Ariana Grande and Ava Max with his rendition of Starships 1985 song We Built This City.

While the original lyrics declare the city is built on “rock and roll”, LadBabys festive version credits the beloved sausage roll.

Heres what you need to know about the potential Christmas star.

LadBaby, aka Mark Hoyle, is a dad-of-two from Nottingham, who lives in Hemel Hempstead with his wife Roxanne and their children.

He found fame after launching his YouTube channel in 2016, documenting his lad to dad parenthood journey.

His page has over 467,000 subscribers all who tune in to witness his hilarious skits and spoof videos alongside his family-of-four.

And just this year, Mark fended off the likes of Prince William and Liam Payne to win Celebrity Dad Of The Year.

When was his song released?

The 31-year-olds rendition of We Built This City was released on Friday 14 December and has since gained over 500,000 views on YouTube.

All the proceeds are going to foodbank charity The Trussell Trust.

What are his chances of becoming Christmas number one?

As of Monday 17 December, We Built This City… On Sausage Rolls sat at number two in the Official charts – 978 sales and streams behind top contender Ava Maxs Sweet But Pyscho.

Ariana Grandes thank u, next closely tailed LadBabys Christmas anthem with just 508 sales and streams between them.

Bookies Betfair placed LadBabys chances of winning at 5/1, with Ariana Grande at 2/9 and Ava Max at 4/1.

Speaking to Offical Charts after finding out his mid-week position, LadBaby said: Who would have thought it? A sausage roll song being sung by a Nottingham lad would be sitting at Number 2 in the Official midweek Singles Chart?! What a fantastic achievement and great START… but lets not stop there!!

Lets pinch that Number 1 spot from the global mega stars, eat our own body weight in sausage rolls AND most importantly raise even more money to support the amazing UK food banks charity Trussell Trust this Christmas!

You can download We Built This City… On Sausage Rolls on iTunes and Amazon, and can stream it on Spotify.

MORE: When is the Christmas number one announced and who is number one in the charts now?

MORE: What to watch on TV this Christmas: 10 festive treats you wont want to miss 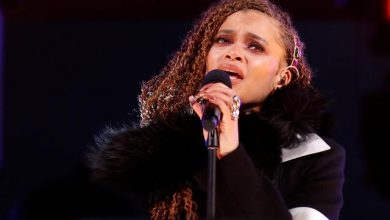 Ariana Grande apologises to ex Ricky Alvarez for giving him worst line in Thank You, Next