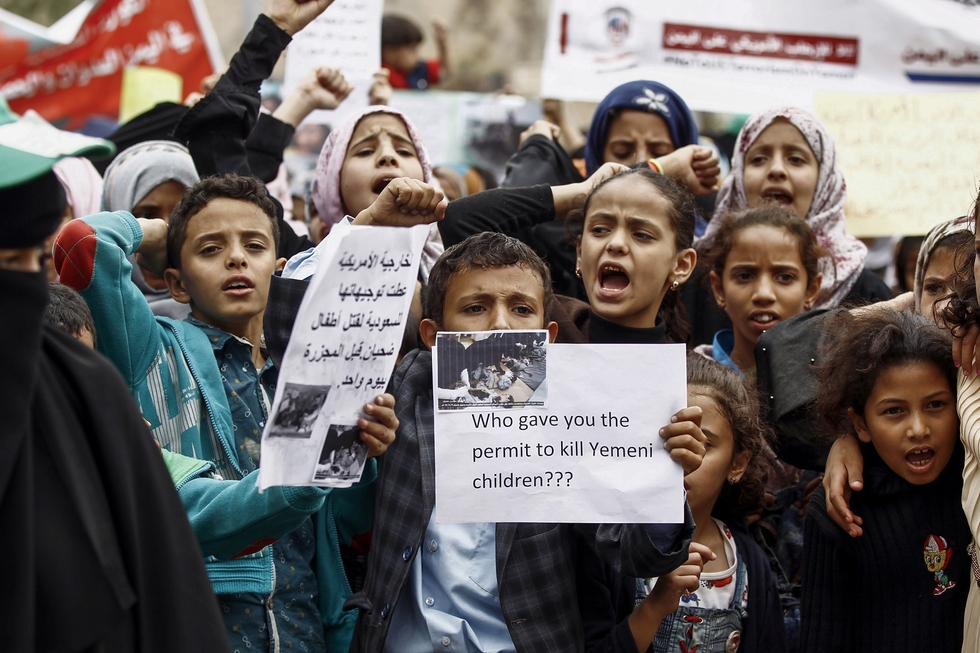 The US Senate has voted to halt Washington's assistance to the Saudi-led coalition in Yemen, delivering a blow to President Donald Trump, who has made the partnership with Riyadh a focal point of his foreign policy.

The resolution passed in the Senate on Thursday afternoon with 56 votes in favour and 41 against.

The result marks the first time that the US Congress has invoked the War Powers Resolution of 1973, which gives it the power to withdraw US involvement from wars it has not authorised.

"It is time for the United States Congress to tell the despotic government of Saudi Arabia that we do not intend to follow their lead in their military adventurism," Senator Bernie Sanders, one of the resolution's co-sponsors, said on Thursday before the vote.

"Their intervention in the civil war in Yemen is the cause of the humanitarian disaster."

The Yemen vote comes amid growing anger in Washington at the assassination of journalist Jamal Khashoggi, who was killed by Saudi government agents at the country's consulate in Istanbul in early October.

It is also a sharp rebuke of Trump, who has vowed to remain a staunch supporter of Saudi Arabia and the country's de facto ruler, Mohammed bin Salman (MBS), despite Khashoggi's murder and amid growing international outrage over the situation in Yemen.

Over two days of debate, lawmakers who backed the bill highlighted the suffering caused by the conflict there and criticised several of Saudi Arabia's domestic and regional policies, including the purported kidnapping of Lebanese Prime Minister Saad Hariri last year.

The war in Yemen has killed tens of thousands of people, brought the country to the verge of famine and caused a cholera outbreak.

Saudi Arabia launched a military operation in Yemen in 2015 to root out the country's Houthi rebels and restore the kingdom's ally, Yemeni President Abd Rabbuh Mansour Hadi, to power.

The US military provides intelligence and logistic support to Saudi forces, and up until recently, it was also assisting with the mid-air refuelling of Saudi jets.

For Thursday's bill to become law, it still needs to be passed by the US House of Representatives, an unlikely outcome, at least until the new year, when a Democratic majority takes over the chamber.

Hurdles in the House

On Wednesday, in a 206-203 vote in the US House of Representatives, lawmakers narrowly passed a provision to prevent the application of parts of the War Powers Resolution before the end of the chamber's current term at the start of 2019.

Senior members of the Trump administration have repeatedly sought to convince US lawmakers to vote against the resolutions to end US involvement in Yemen.

On Thursday, Secretary of Defence James Mattis and Secretary of State Mike Pompeo asked members of the House “to continue the military advising, logistics support and intelligence that have for years been shared with Saudi Arabia”, the New York Times reported.

People are starving, homes have been bombed, diseases – including a cholera epidemic – are rampant, and too many have been lost to a reckless Saudi-led aerial bombing campaign

After that briefing, Congresswoman Debbie Dingell, whose district in southeast Michigan includes thousands of Yemeni Americans, said Congress has a "moral responsibility to end the war in Yemen".

"Families in my hometown are telling me about horrific conditions," Dingell, a Democrat, said in a statement. "People are starving, homes have been bombed, diseases – including a cholera epidemic – are rampant, and too many have been lost to a reckless Saudi-led aerial bombing campaign."

In a Wall Street Journal column published late in November, Pompeo said US-Saudi partnership was "vital" to US national security interests and the stabilisation of the Middle East.

Also on Thursday, all 99 lawmakers present in the Senate voted in favour of an amendment stating that the Yemen resolution would not disrupt US commitments to Israel.

US Senate resolution on Yemen passes, but long road lies ahead