TRIPOLI – Once, they were loyal to former leader Muammar Gaddafi. Now, members of a shadowy Islamic movement have allied themselves to rival sides of the war in Libya.

As a result, citizens and analysts say, the Madkhalis have become a driving force behind the four-year-old conflict and will be a decisive key to any new balance of power in the country.

Madkhalis can accuse you of everything they want, without having evidence

The Madkhalis follow the precepts of Saudi Salafist scholar Rabee al-Madkhali, now in his 80s. The movement grew in Egypt, Saudi Arabia and other Gulf countries in the 1990s as a response to the political activity of the Muslim Brotherhood, and is guided by a central tenant that whatever individual or group is in power should be obeyed.

“Madkhalism calls for unquestioning loyalty to governments, even those that use extreme and unjustified violence against their subjects so long as they do not commit clear acts of infidelity," wrote Andrew McGregor, Director of Aberfoyle International Security.

"This extreme position separates the group from other Salafi movements who draw the line at unjustified violence inflicted upon Muslims."

Madkhalis also rejected participation in elections and other democratic processes on the ground that it inspires loyalty to individuals and organisations rather than to God, according to McGregor.

These tenets, as journalist Taylor Luck has pointed out, have proven useful to governments "as a counterbalance against Islamist opposition groups and solidify their own religious legitimacy". 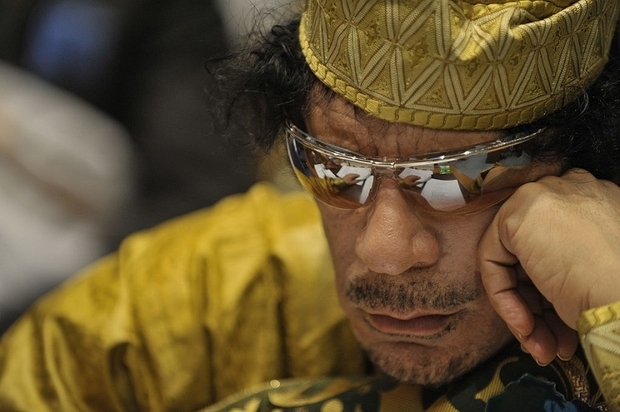 Gaddafi first invited the Madkhalis to Libya in the 2000s to combat the threat posed by the Libyan Islamic Fighting Group (LIFG), which was agitating to overthrow the longtime dictator.

In the beginning of the 2011 uprisings, Madkhali sheikhs from Saudi Arabia sent fatwas warning that revolution against Gaddafi was "sedition" and called on Libyans to stay home.

Seven years later, members of the group are entrenched in rival sides of the country's civil war. and are increasingly a decisive factor in Libyan politics and everyday life.

Although the Madkhalis have been called "quietists" because of their support of the status quo, they are increasingly becoming a decisive factor in Libyan politics and everyday life, while building their own religious vision of society, in line with the aims of Saudi foreign policy in the area.

Despite military commander Khalifa Haftar's self-crafted image as an opponent of religious fundamentalists, the Madkhalis have allied with Gaddafi's former ally and are seen as crucial to maintaining power in his eastern stronghold of Cyrenaica.

When Haftar launched Operation Dignity, his 2014 campaign to defeat militants in Benghazi, Sheikh Madkhali issued a fatwa to support Haftar against the Muslim Brotherhood, who had links with Haftar's opponents.

At that point, Haftar dissolved a Madkhali force known as the Tawhid Brigade, and incoporated it into his own forces, Ahmed Sala Ali of the Atlantic Council wrote last year. 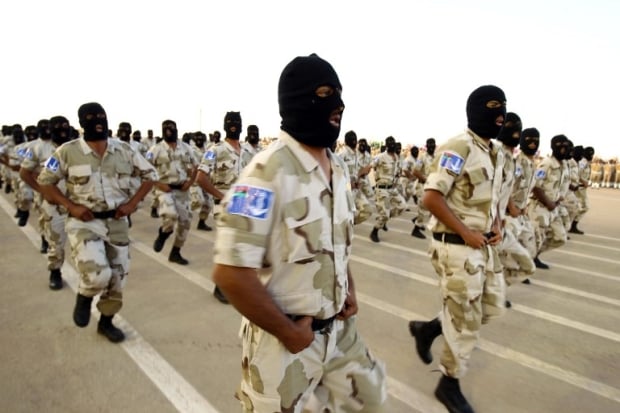 Today in Cyrenaica, Madkhali forces have been fully integrated into Haftar's Libyan National Army, while his sons Khaled and Saddam – according to local sources – head two Makhdali brigades that control Benghazi and inflict public punishments and arbitrary executions.

Yet while their forces have bolstered Haftar's campaign in the east, Madkhalis have also formed part of the security forces of the UN-backed government of Fayez al-Sarraj in Tripoli.

Here they are a major part of the al-Radaa Special Deterrence Forces, numbering around 1,500 men. Led by Abdul Rauf Kara, the Radaa has imposed ruthless control over the capital and surrounding areas, say observers.

In the absence of a functioning security and justice sector, policing and detention tasks are delegated to state-affiliated armed groups. An increasing number of armed groups subscribing to the Salafi-Madkhali ideology are in charge of the security sector in Libya, specialising in the control of detention centres and intelligence services.

According to a recent UN Libya experts report and to testimonies collected on the ground, segments of the Libyan population seem particularly targeted, such as internal displaced from Benghazi and families with members belonging to revolutionary or Islamist armed groups or Sufi followers.

"Madkhalis can accuse you of everything they want, without having evidence," said one source, who works at Mitiga Airport in Tripoli, which is controlled by Radaa.

In one particularly notorious incident last November, Radaa forced the closure of Tripoli's annual Comic Con festival, arresting the organisers for "acts of indecency and against public morals".

"Kara says he wants to punish them, but I think he just wants to indoctrinate them differently," said the source.

"Nobody can see these inmates. Local organisations cannot get in. I honestly do not think they want to re-educate them. I strongly believe they want to brainwash them again, with their Salafi doctrine. Prisons have always been used to do that."

In eastern Libya, the Madkhalis' power has grown to the extent that they can exert their influence directly over Haftar, says locals.

The case of Mahmoud al-Mustafa Busayf Werfalli, a commander of the Libyan National Army sought by the International Criminal Court (ICC), is a case in point.

The ICC has accused Werfalli of ordering and participating in extrajudicial executions of prisoners in Benghazi.

'There were 16 sheikhs speaking over the phone to Salafis in Sebha. Only four of them were Libyans. The rest were Saudi'

Haftar initially announced his arrest, but Werfalli is still at large, with local sources claiming that the Madkhalis had threatened to withdraw their support if he was arrested.

Several Benghazi citizens told MEE by phone that Werfalli was free in Benghazi and that he was still active on social media, where he posted pictures greeting his followers.

In another incident, a UN panel of experts reported in January 2017, that a cargo of Arabic-language literature imported from Egypt, including works by Nietzsche, Paulo Coelho, and the Egyptian Nobel laureate Naguib Mahfouz, had been confiscated by Madkhalis in the city of al-Marj.

A months later, Haftar's Libyan National Army issued a decree prohibiting women under 60 years of traveling without being accompanied by male relatives. 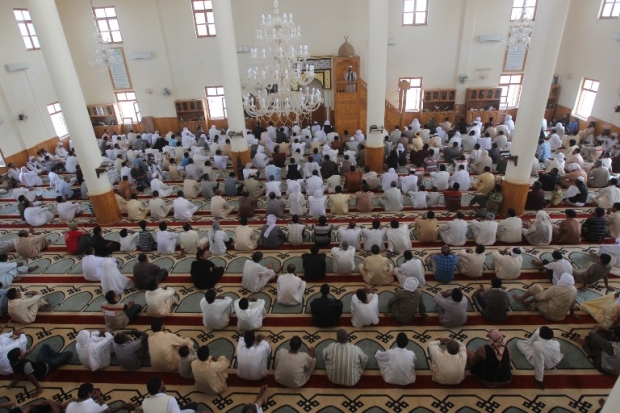 The Madkhalis currently control more mosques than any other group in Libya, one researcher told MEE (AFP)

Libyan researcher Bashir al-Zawawi told MEE that Madkhalis currently control more mosques than any other group in Libya and are steadily improving their propaganda.

“Madkhalis are running 17 Islamic schools in Tripoli, three in Misrata, one in Kufra and recently some in Derna. They have their own books and also a particular niqab for girls," he said.

“They use different means, including lectures, 28 radio channels across the country and a huge influence on social media to spread their ideas and anti-democratic views."

The group, he added, has recently started to broadcast live lectures on Facebook.

"In one event, there were 16 sheikhs speaking over the phone to Salafis in Sebha [a city in southwestern Libya]," Alzawawi said. "Only four of them were Libyans. The rest were Saudi."