Saudi Crown Prince Mohammed bin Salman attempted to persuade Israeli Prime Minister Benjamin Netanyahu to start a conflict with Hamas in Gaza as part of a plan to divert attention from the killing of journalist Jamal Khashoggi, sources inside Saudi Arabia have told Middle East Eye.

A war in Gaza was among a range of measures and scenarios proposed by an emergency task force set up to counter increasingly damaging leaks about Khashoggi's murder coming from Turkish authorities, according to sources with knowledge of the group's activities.

The task force, which is composed of officials from the royal court, the foreign and defence ministries, and the intelligence service, briefs the the crown prince every six hours, MEE was told.

It advised bin Salman that a war in Gaza would distract Trump's attention and refocus Washingtons attention on the role Saudi Arabia plays in bolstering Israeli strategic interests.

It also advised bin Salman to “neutralise Turkey by all means” – including attempts to bribe Turkish President Recep Tayyip Erdogan with offers to buy Turkish arms and statements by the crown prince attempting to shore up relations between Riyadh and Ankara.

In comments made at last month's Future Investment Initiative, bin Salman claimed Khashoggi's murder was being used to drive a wedge between Saudi Arabia and Turkey. He said that would not happen "as long as there is a king called King Salman bin Abdelaziz and a crown prince called Mohammed bin Salman in Saudi Arabia".

Khashoggi was brutally killed in the Saudi consulate in Istanbul on 2 October, in an operation which Turkish authorities believe was carried out by a hit squad whose suspected members contained several members of bin Salman's personal bodyguards.

Saudi officials have denied that the crown prince has "any knowledge whatsoever" of Khashoggi's killing.

Some of the task forces other recommendations were leaked to a close confidant of bin Salman, Turki Aldakhil, the general manager of the Al Arabiya news channel. He revealed "more than 30 potential measures" that Riyadh could take if Washington imposed sanctions.

He said the kingdom was capable or doubling or tripling the price of oil, of offering Russia a military base in the north of the country, and of turning to both Russia and China as its main arms suppliers.

Aldakhil later dismissed these threats “as his ideas only", but his original article on the Al Arabiya website sources these threats to “ decision-making circles within the kingdom”. This, MEE can reveal, is the task force set up to advise bin Salman.

Saudi Arabia and Israel are considered to have increasingly close secret ties, driven by their shared hostility to Iran, and bin Salman has been a key player in efforts to sell Trump's "deal of the century" peace plan for Israel and Palestine to regional leaders.

Speaking to the BBC earlier this year, Netanyahu said that Israel and some Arab nations were going through a process of "subterraneran normalisation".

And while Khashoggi's killing has been widely condemned by world leaders, Netanyahu said earlier this month: "It is very important for the stability of the region and the world that Saudi Arabia remains stable."

Two weeks after the murder, Saudis government sources also noted an abrupt change of tone in Netanyahu's remarks about Hamas during negotiations with Qatar aimed at easing the blockade on the Gaza Strip.

Netanyahu told his cabinet meeting on 14 October: "We are very close to a different kind of activity, an activity that will include very powerful blows. If it has sense, Hamas will stop firing and stop these violent disturbances, now." 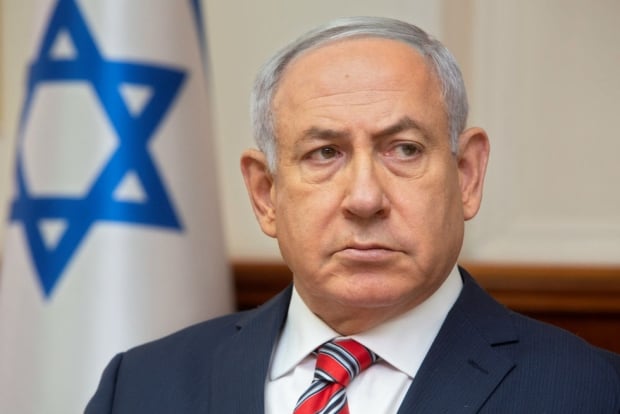 Similarly, Israel and Qatar had just reached a deal to allow funds into the blockaded strip and pay the salaries of Hamas government workers, when Sunday night's botched Israel special forces raid, a raid which had political permission, took place in Khan Younis.

Hamas subsequently launched hundreds of rockets into southern Israel, and Israel launched air strikes in Gaza with at least 15 Palestinians and one Israeli killed in the most serious exchange of fire since 2014.

Speaking on Sunday before the raid, Netanyahu had said that he was "doing everything I can to avoid an unnecessary war" in Gaza.

"I am not afraid of war if its necessary, but I want to avoid it if its not necessary,” he said.

Gaza wakes up to rubble and funerals after Israeli strikes

According to MEE's sources, other measures recommended by the task force to show Trump that Saudi Arabia was not dependent on its alliance with Washington included inviting Russian President Vladimir Putin to visit Riyadh.

Putin is alleged to have said that he would go through with the visit regardless of the outcome of the Khashoggi affair.

Saudi Arabia has also made good on its promise to raise the price of crude oil by production cuts.

Saudi energy minister Khalid al-Falih said after a meeting of OPEC at the weekend that the cartel believed production would need to fall by nearly one million barrels per day. The announcement alone sent the price of international bench mark Brent Crude rising to $70.83 a barrel, having dipped below $60 a barrel at the end of last week.

The move was in direct defiance of Trump, who had tweeted on Monday: "Hopefully, Saudi Arabia and OPEC will not be cutting oil production. Oil prices should be much lower based on supply!”

Meanwhile, pressure on bin Salman is growing as more details emerge from the investigation into Khashoggi's killing.

The MEE can reveal that Turkey has recordings of conversations among Saudi officials which date back to 28 September, when Khashoggi first entered the consulate to arrange for a certificate which proved he had divorced his second wife. This was three days before he was killed.

These tapes reveal that the Saudi military attache in Istanbul, Ahmed Abdullah al-Muzaini, played a crucial role in the killing of Khashoggi.

After meeting Khashoggi and telling him he was taking over his file personally, Muzaini flew the next day to Riyadh where he met Major General Ahmed Asiri the deputy head of Saudi intelligence and one of the commanders of the Tiger Squad formed to assassinate dissidents at home and abroad.

Describing him as the brains behind the plot, the Turkish government-controlled newspaper Sabah said Muzaini discussed Khashoggis assassination with Asiri and flew back to Istanbul. He returned to Riyadh at 9pm on the day Khashoggi was murdered.

MEE can also reveal that the leader of the murder squad, Maher Abdulaziz Mutreb, briefed Mohammed al-Otaibi, the consul, before the killing took place. Otaibi left Turkey on 16 October, the day before his official residence was searched by Turkish investigators.

On Monday, the New York Times revealed that Mutreb instructed his superior to “tell your boss” that Khashoggi had been killed in one of four calls back to Riyadh on the day of the murder.

This is increasing the pressure on Capitol Hill for a formal response from the Trump administration.

The CIA and other intelligence officials are set to brief Congress this week and congressional leaders are due to press Gina Haspel, the CIA director, who has heard one audio recording of Khashoggis murder to testify to them about what she heard.

Trump is reviving the 1953 coup plan against Iran. It won’t work twice