Tens of Coptic monks were beaten by Israeli military police on Wednesday during a protest over the contested al-Sultan monastery on the site of the Church of the Holy Sepulchre, the head of Jerusalem's Coptic Church told Middle East Eye.

The monks were staging a sit-down protest in the plaza of the church in Jerusalem's Old City to oppose Israeli-led restoration works at the site which they say favour Ethiopian monks living in the monastery.

One monk, Macarius Orshalemy, was dragged and pinned to the ground by the military police at the protest, while others were struck with batons as they sought to obstruct workers from Israel's Antiquity Authority moving restoration materials and tools inside.

Orshalemy was released half an hour after the Coptic Church asked the Egyptian embassy in Tel Aviv to interfere, Coptic Bishop Anba Antonius told MEE.

"The Israelis are carrying out a restoration in the Coptic church's property without our consent, and in favour of the Ethiopian monks. That's why we were protesting and tried to prevent them," Antonius said.

The al-Sultan monastery sits on top of the Church of the Holy Sepulchre, and it is currently controlled and managed by the Ethiopian Church in Jerusalem, despite an Israeli high court ruling in 1971 that affirmed the Egyptian Coptic Church's ownership over the monastery.

Antonius said that the Coptic Church would go to court to stop the Israeli-led restoration inside al-Sultan and ask for the high court decision to be implemented.

"We have 23 property documents issued since 1680 and until 1961 by the Ottoman Empire and some by Jordan, that proves our ownership of al-Sultan monastery. The high court decision said that a committee should be formed to study these documents, but after 47 years no committee was formed," Antonius said. 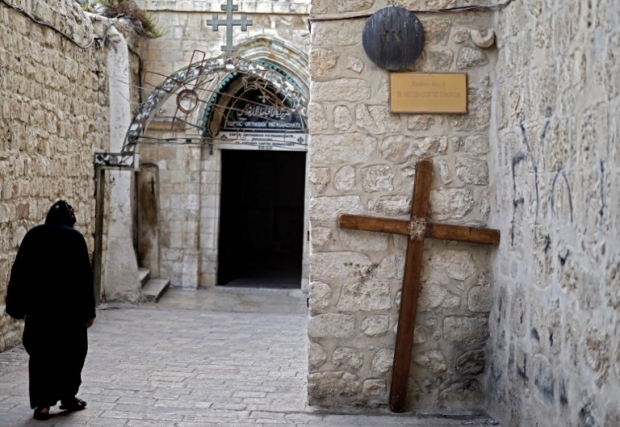 A Coptic Christian monk walks past a cross on the roof of the Church of the Holy Sepulture in Jerusalem's Old City, October 2018. (AFP)

In 1970, the Israeli authorities broke into Al-Sultan and kicked out the Coptic monks. They changed the door locks and gave the keys to Ethiopian monks who were already living in the monastery.

Antonius said that this was a "retaliation" against Egypt which fought against Israel in the 1967 Middle Eastern war when Israel occupied the West Bank including the Old City of Jerusalem.

In September 2017, the ceiling of the Angel chapel collapsed after a restoration work in a property above it, which belongs to the Greek Orthodox church, went wrong.

The Angel chapel, a pilgrimage and tourist site on the ninth station of the cross, was shut down for safety reasons by Israeli authorities.

Antonius said that the Coptic church signed a contract with a construction firm to restore the chapel's ceiling, but the Israeli government refused to issue a permit for the restoration works.

"[Israel's prime minister Benjamin] Netanyahu himself issued the order to forcibly restore the chapel a week ago, I have been told by [David Azulai] the minister of religious services," Antonius said.

"They refused to let us renovate and repair the chapel inside the monastery in order to show that we don't have any relation with the place and that it belongs to the Ethiopian monks."

Antonius said that the Israeli government was playing a "political game" through the church properties by supporting the control of the Ethiopian Church over al-Sultan.

"Israel is strengthening the Ethiopian monks over the Coptics monks in the monastery, and this is happening because the ties between Egypt and Israel are weaker than Ethiopia and Israel," he said.

MEE contacted the Ethiopian Church in Jerusalem for a comment but had not received a response at the time of publication.

Antonius said the Coptic claim to al-Sultan dated back to the seventh century when Abd al-Malik ibn Marwan, an Umayyad caliph who built Jerusalem's Dome of the Rock mosque, donated the monastery to the denomination's monks.

"We were here since then, although we don't have the documents that go back to the seventh century, we still have an ownership document as old as 1680," he said.

In the 17th century, Ethiopian monks entered al-Sultan after heavy taxes by Ottoman authorities forced them to sell their properties to the Armenian and Catholic churches.

"The Armenians and the Catholics kicked them out from the properties after they bought them. They were displaced and had nowhere to go. They came to us and we welcomed them in our monastery," Antonious said.

"Now you have more than 15 Ethiopian monks in the monastery and just one Coptic. They don't have one document to prove their ownership and we are not allowed to enter the monastery, even me, the Bishop of the Coptic Church is prevented from praying there."

REVIEW: An important guide to the Israeli-Palestinian conflict