King Abdullah II has said that Jordan has notified Israel that it wants to reclaim territories leased under a 1994 peace deal between the two countries.

Sunday's announcement comes after a political campaign from parties and unions across the political spectrum to press the government to withdraw from the deal.

"We have informed Israel [that we are putting] an end to the application of the peace treaty annexes regarding Baqura and Ghumar," said the king.

"Israel was informed today of the Jordanian decision," the monarch said, stressing that "Baqura and Ghumar are Jordanian land and will remain Jordanian".

The Wadi Araba peace treaty had allowed Israel to use the lands for 25 years and allowed either party to inform the other before the end of the land rental period if they want to end the agreement.

Ghumar is 4,000 dunums of border lands that fall within the Aqaba district that is agriculturally rich and has plenty of underground water. Israel occupied the lands during the 1967 Middle East war.

Baqura is 6,000 dunums and falls east of the Jordan River and is part of the Irbid district.

Opposition Jordanian parties, including Islamists, leftists and pan-Arabists, as well as professional unions and political activists, had all taken part in the campaign to call for the ending of the deal.

According to annex 1B in the agreement, after the end of the 25 years the agreement would be automatically renewed for an equal number of years unless one party informed the other of its desire to end it by a date no later than 25 October, 2018.

In such a case, both parties would begin discussion based on the desire of either side.

Upon the signing of the peace agreement, Jordan had been satisfied by the fact that Israel recognised its sovereignty over the land and had left the issue of annex 1b for later discussion.

'Jordan rise up, Baqura must be returned'

As the 25 October legal deadline had approached, the National Forum for the Return of the Baqura and Ghumar Land had staged a series of protests.

In the most recent demonstration on Friday, the Forum, which includes professional and trade unions, organised a protest march from the Professional Unions Complex to the government's headquarters on the Fourth Circle in Amman, which is located 3km away.

Approximately 200 protesters had called on the government to invoke the ending of the deal before the deadline so that the lands could return to Jordanian sovereignty. 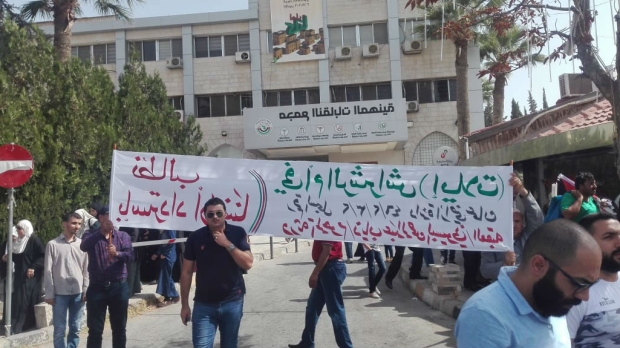 The protesters had chanted slogans including "Jordan rise up, Baqura must be returned" and "People want dignity. It is a matter of national dignity". They also held up signs saying: "Earth equals dignity".

Speaking before the king's announcement, Rula Hroub, a former Jordanian MP who heads the Al Urdun Aqwa (Jordan is stronger) Party and one of the participants in the march, told Middle East Eye: "The government position is elusive and their response to political and popular protests is weak and we want to send a clear message that we are not interested in the renewal of this annex."

Prior to the march, members of the committee to protest normalisation in the Bar Association issued hundreds of legal writs against the prime minister in his official capacity.

The writs were delivered in all the courts of the kingdom and called on the government to inform Israel that Jordan does not want to renew the rental agreement of the lands of Baqura and Ghumar.

Mazen Rshedat, the head of the Jordan Bar Association, told MEE "that the legal writs are a legal process aimed at suing the government in case it refused to return the land because the government is not obliged to automatically renew the annex and it must return sovereignty of these lands".

"According to our constitution, it is unacceptable that Jordanian lands are not under the countrys sovereignty," he said.

The previously vague answers and general silence of the government about its legal plans had pushed 86 of the 130 members of the Jordanian parliament to sign a memorandum calling on the government to revisit its position on the issue of the Israeli use of the lands.

Khaled Ramadan a left-wing member of parliament, had told MEE that MPs were considering "the possibility of a no confidence vote in the government if it fails to respond to the requests of the majority of the parliamentarians".

Legally, Anis Qassem, a Palestinian expert on international law, said that the "right to use the lands of Baqura and Ghumar was given to Israel and gave it de facto sovereignty while Jordan has superficial sovereignty".

"The difference is clear in the annex which states that Israel can use those two lands and that Israelis can enter those lands without a visa or permission," he said.

If Jordan needs to stop Israelis from using these lands, Qassem told MEE, then both parties will enter into open-ended negotiations and if these negotiations fail then they can go to arbitration.

The arbitration clause in the Jordan-Israel agreement is the same as the one in the Camp David agreement without specifying where it will take place and under which law it will be executed, Qassem explained.

Article 29 from the Wadi Araba peace treaty between Jordan and Israel states that resolving conflicts will be done through agreement between parties and if that fails then it will be turned to arbitration.