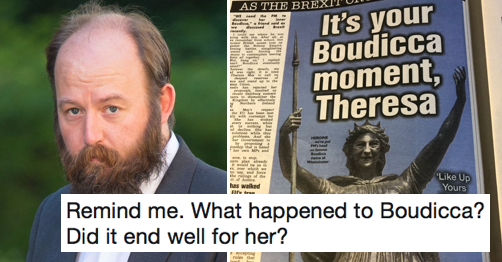 Theresa Mays former chief of staff Nick Timothy, who helped the so-called PM lose her majority in last years general election, has some advice for his old boss in todays Sun.

Because following Nicks advice has panned out pretty well for her in the past… pic.twitter.com/K0fEyUlmmP

Its your Boudicca moment, Theresa … Like Up Yours Delors, PM needs to say: On your way, Barnier

Not only did it not work out too well the last time Timothy advised the so-called PM.

But the Boudicca comparison might not be the most helpful, although some might say it is entirely appropriate, as all of these people pointed out.

Remind me. What happened to Boudicca? Did it end well for her?

Boudicca suffered a catastrophic loss then poisoned herself.
And these people were the 'brains' of Brexit. https://t.co/74Apgc2eWb

Does…does Nick Timothy know how things ended for Boudicca? Did it not occur to him to google it? https://t.co/epmhniXeQ0

Boudicca led the Iceni into annihilation. She died a defeated queen.

Couple of points
– Boudicca led a failed uprising then poisoned herself to death
– Not all advice has to rhyme https://t.co/Ewvh9yYWET

Boudicca burnt London to the ground. And then lost to the Europeans.

Remember when Nick Timothy himself invoked the spirit of Boudicca by…deleting his Twitter account after criticism of his implausible claims about the Windrush scandal? https://t.co/QgVbVggly8

your weekly reminder that Boudicca was defeated and then committed suicide with poison https://t.co/QN1aNBCPiS

She wouldn't be in this situation if she'd previously said "shut up with your constant amazingly bad political ideas, Nick Timothy" https://t.co/VLzhU1sHU7

Boudicca was a queen of the British Celtic Iceni tribe who led an uprising against the occupying forces of the Roman Empire in AD 60 or 61, and died shortly after its failure, having supposedly poisoned herself. She is considered a #Brexit folk hero.

No wonder were so screwed. For several years Theresa May took her political advice from a man who speaks like the fucking Cat in the Hat.https://t.co/Ewvh9yYWET

#SwedishChristmas: The biscuits that were once thought to improve your sex drive

Khashoggi murder a monstrosity, no arms exports to Riyadh until incident cleared up – Merkel