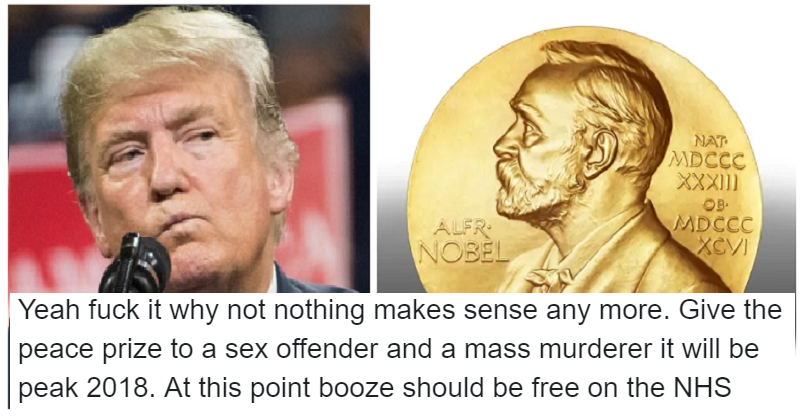 The Nobel Peace Prize has been awarded to two anti-rape activists, Nadia Murad and Denis Mukwege, however, prior to the announcement, Donald Trump had allegedly been one of the main contenders, for his efforts to persuade North Korea to end its nuclear programme. In fact, the man himself said this about his chances.

What a truly beautiful selfless individual he is.

Anyway …this is what people were saying about the possibility of Trump becoming a Nobel laureate.

Yeah fuck it why not nothing makes sense any more. Give the peace prize to a sex offender and a mass murderer it will be peak 2018. At this point booze should be free on the NHS https://t.co/zZhaTEVyeZ

Imma just fire myself into the side of a fucking mountain now. This shit is too much. https://t.co/CMQiPhn52q

Agreeing not to blow up the planet and each other despite having narcissistic personalities shouldnt qualify you for the Nobel Peace Prize. https://t.co/SUb8fiqSJf

What if instead of Trump, the Korean pop-sensation BTS won a Nobel Peace Prize for their work with UNICEFs campaign to end violence against children and young people? I bet Trump would literally go insane.

Sounds as if Donald Trump sees Kim Jong Un as a candidate for Nobel Prize in both Peace and Literature. https://t.co/8HkHAfGF92

Okay we definitely slipped into a dark mirror dimension when the Hadron collider was switched on. It's the only logical explanation.

THE CUNT IS LITERALLY KEEPING BABIES IN FUCKING CAGES ARE YOU OUT OF YOUR FUCKING MINDS?https://t.co/nBPXZvDcL3

After the announcement, people had this to say.

BREAKING! Donald Trump snubbed for Nobel Peace Prize despite achievements in not nuking anyone

Trump's going to be raging this morning over his Nobel Prize snub ….

Amidst all the excitement, we cant believe one group of people didnt even get a mention.

UNBELIEVABLE: Fury as Nobel Peace Prize goes to some unheard of foreign names instead of brave Brexiteers who saved England by getting us out of the tyrannical fascist EU.

Its probably down to those Remoaners.

Family of girl, 2, who fell to her death from cruise ship could face criminal charges