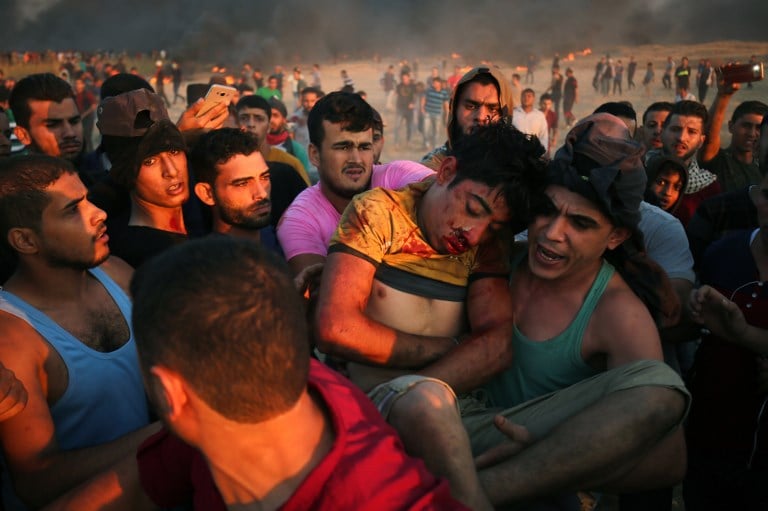 Ashraf Al-Qudra, a spokesperson for the health ministry in Gaza, told reporters that six Palestinians were killed and 112 others injured when Israeli soldiers opened fire on protesters on Friday in the eastern Gaza Strip.

Thousands of Palestinians joined demonstrations as part of the March of Return protests that started on 30 March to demand an end to Israel's 11-year blockade on Gaza and the right of return of Palestinian refugees to their hometowns in what is now Israel.

Tamer Abu Ermanah, 27, was shot and killed by Israeli soldiers east of the town of Rafah, in the southern Gaza Strip, he said.

Gaza's health ministry said late on Friday that a seventh Palestinian was killed. His name was Mohamed Abbas.

The health ministry said 192 Palestinian demonstrators were injured. Of that, 140 people – including 45 children, eight women and two paramedics – were hurt by live ammunition.

A Middle East Eye photographer in Gaza added that three Palestinian youth approached the Israeli military fence, crossed it and got into a fist-fight with Israeli snipers stationed west of the fence.

The Israeli army said approximately 14,000 "rioters and demonstrators" had gathered at various sites along the border. In a statement, the army said troops "spotted a number of assailants who climbed the security fence in the southern Gaza Strip".

It said they planted an "explosive device" there, which blew up and "set the security fence on fire".

The men subsequently approached an Israeli border post and were shot, the Israeli army said. "The assailants were killed," it said, without saying how many people were shot.

The main border crossing to deliver fuel to Gaza had been closed by Israel for weeks on two separate occasions in July and August.

Critics of the tactic describe it as collective punishment to Palestinians.

Last month, Qatar agreed to pay for fuel deliveries to operate the sole power plant in the besieged strip.

Israeli fire in Gaza has killed at least 203 Palestinians since protests began on 30 March. Most of the Palestinians were killed during border demonstrations, though others died in air strikes and tank shelling.

One Israeli soldier has been killed since the protests began.