As the Ahmadiyya community in the US prepares to receive its caliph, or spiritual leader, from the UK, a spotlight is being shed on Ahmadi Muslims, who make up one of the fastest-growing denominations in the world.

On 15 October, Mirza Masroor Ahmad will visit the US for the fourth time, inaugurating mosques in various states, giving a keynote speech and meeting with members of the 20,000-strong Ahmadiyya community.

For some Muslims, Ahmadis are heretics, who idolise their caliph, and they believe the community's founder, Mirza Ghulam Ahmad, is a false prophet. But Ahmadiyya Islam is one of the oldest faiths in the US, a fact lost on many who see Islam as having existed in the country for a few decades at most.

Thats a misconception Sylvia Chan-Malik is seeking to change – while also shining a light on the lives of Muslim women in the US, beginning with those from the Ahmaddiya community.

“This is not a new phenomenon,” says Chan-Malik, 44, a scholar of American and women and gender studies at Rutgers University, referring to Islam. “This did not just happen after 9/11. Muslims haven't been practicing their religion for the past ten years in this country. It's something that's a legacy, that's very much a part of who we are as a nation.”

This is the backdrop for Chan-Malik's first book, "Being Muslim: A Cultural History of Women of Color in American Islam”, which focuses on the lives of Muslim women of colour in the US.

Muslims haven't been practicing their religion for the past ten years in this country. It's something that's a legacy, that's very much a part of who we are as a nation

In the first chapter, she tells the story of a Black working-class woman who immigrated to Chicago named Florence Watts. Through the teachings of Mufti Muhammad Sadiq and the Ahmadiyya movement, she converted to Islam in 1922 and became known as Sister Zeineb.

Chan-Malik says Zeineb's embrace of Islam freed her from the boundaries imposed on her by racial and gender politics in the US, and made her a member of a global community of believers.

She writes: “Through Ahmadiyya Islam, Black women [like Sister Zeineb] in 1920s Chicago found 'safe harbours' – spaces of kinship-shared spiritual desires and of respite from racial and gendered harm – in which they could protect and nurture their bodies minds and souls."

The writer's journey to Islam

Since 9/11, there has been an increasing interest in what Islam is and who Muslims are, especially Muslim women, says Chan-Malik, who started her PhD in ethnic studies at UC Berkeley two weeks before the September 11 attacks.

She became involved in activism and organising circles within various Muslim communities around that time, and through that engagement, she started seeing how US racial politics – in particular, the relationships between Asians, Arabs and African Americans – was playing out within the Muslim community.

Through her research, she became involved with the community itself: She started attending local mosque gatherings and joined women's Quran groups to learn more. Her interest in Islam as a religion grew, and she eventually converted in 2004.

Anti-Muslim bigotry is now US law

Chan-Malik's parents were Chinese immigrants who settled in California, where she was raised. They were Buddhist, but only culturally, and at one point in high school, she even thought about converting to Christianity, she explained.

“As an Asian-American woman, whom very few people in the US would assume is Muslim, I hold the interesting position of being very aware of my own Muslim-ness, while those around me are not,” she says. “Thus, I have been privy to hearing the insults of others regarding Muslims, when those making them were unaware of my identity.”

Chan-Malik does not wear a headscarf, but in one incident when she did, she was harassed.

She recalls how during the Eid al-Fitr holiday, she was walking to the mosque after parking her car with her two young daughters, who were aged 3 and 5 at the time. She and her daughters were all wearing headscarves since they were going to pray.

“In the liberal San Francisco Bay Area, a man rolled down his window, stopped right in front of myself and my children, and screamed in my face: “Get out of here! Go back to where you came from!” and then drove off. I thought, 'Wow, and I only wear a scarf in public a handful of times a year. Imagine what it is like for women who wear it everyday.'”

Over the course of 10 years, Chan-Malik interviewed between 30 to 40 Muslim women for her book, weaving personal stories from the early 20th Century – including those of women belonging to the Ahmadiyya and Nation of Islam movements – until the present day, where women of colour practice their religion in a hostile, anti-Muslim environment in the US.

In her book, Chan-Malik particularly pays attention to Black Muslim women who left their mark on Islam in the US.

Before the 1960s, almost all Muslim women in the US were Black, she found. Those women include Sister Betty Shabazz, the widow of Malcolm X and a voice for Black empowerment; Dakota Staton, a jazz singer; and black Muslim women in early 1920s Chicago like Sister Zeineb. 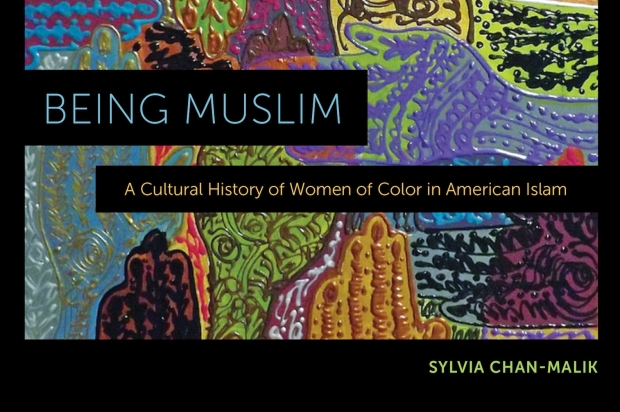 She also addresses the ways in which white feminists have perpetrated the trope of the “poor Muslim woman” and how freeing her from her supposed subjugation became part of the rationale behind the US' War on Terror. She says this trope, rooted in colonial logic, is epitomised by the headscarf; the idea that Muslim women are made to submit, and that Islam as a framework and ideology is imposed upon them.

“What Muslim women need and want more than anything is respect for their own choices,” she explains.

“Any woman I know who wears the headscarf is choosing to do so. I know far more stories of women whose families are telling them to take the scarf off because it's dangerous to wear it in this political environment. And the women are saying 'no because it's such an important part of my identity.'”

Chan-Malik said she hopes her book will teach young Muslim women about the history of their compatriots in the US, and allow them to learn about Black Muslim women, whom she says served as the inspiration throughout history for what it means to be Muslim in the US.

“They engaged Islam as a way to address and critique their status,” she says, adding they also used their religion "as a critique of the US state and politics-as-usual".

Muslim women's leadership role within their communities continues today, as seen through the record number of Arab and Muslim American women running for public office. Muslim women like Rashida Tlaib of Michigan and Ilhan Omar of Minnesota, who emerged from their respective primaries victorious, will almost certainly become the first Muslim women in Congress come January.

The religion and culture of Islam have always been intertwined with race in the US, and thus Islam's very existence as a non-white, non-Christian religion is a challenge to the dominant whiteness of society, Chan-Malik says.

“That's really relevant for young Muslim women today under a Trump presidency, where Muslim and Islam are talked about in such negative ways."

First Saudi tablet with 100% local OS to be launched soon