After 13 annual attempts to pass a student council resolution at the University of Michigan in support of divestment from companies that benefit from Israeli human rights abuses, activists last year succeeded in pushing a measure that asks the university to investigate its investments into such corporations.

What followed was jubilation from supporters of the resolution, who had distanced themselves from the Boycott, Divestment and Sanctions (BDS) movement.

However, the success came at a cost for those who lobbied for the measure.

Students who expressed support for divestment at a long meeting in November ended up on Canary Mission, a website dedicated to demonising pro-Palestinian students.

The initiative, which operates anonymously, blasts students and faculty who criticise Israel with accusations of anti-Semitism and supporting terrorism. With more than 23,000 followers on Twitter, it uses its reach to suppress pro-Palestine activism.

The identities of the people behind Canary Mission have been unknown since it became active in 2015. But new information is starting to unravel the mystery, raising the prospect of accountability.

Last week, the Grayzone Project revealed the identity of the owner of the domain: Howard Sterling, an American lawyer that advises Israeli healthcare companies. Coincidently, the Electronic Intifada identified Adam Milstein, a real estate investor and top donor to Israeli causes, as the financier of the initiative. Sterling did not return MEE's request for comment.

The Electronic Intifada relied on leaked excerpts of an Al Jazeera investigation on the Israeli lobby in the United States. The documentary was reportedly shelved after pressure from pro-Israeli groups against Qatar, which finances the Al Jazeera network.

Nadine Jawad was the vice president of student government at the University of Michigan when the divestment resolution was passed last year. She has won the prestigious Rhodes scholarship to pursue graduate studies at Oxford University in the UK.

Despite her academic excellence, a Canary Mission profile accusing her of associating with anti-Semites who promote "terrorists" shows up on the first page when she is searched on Google.

Jawad knew that being put on the website was a possibility before she spoke in favour of the resolution and voted for it. She said ending up on the list has been used as a scare tactic to deter people from supporting divestment.

Hopefully, the students victimized by Canary Mission are able to take legal recourse for any harm the website has caused them.

"I didn't care to be quite honest," Jawad told MEE. "I'm the first Muslim, Arab woman to ever be in my position. I understand that identity politics are not everything, but to me, it was fundamentally important to stand up for any voices that felt like they hadn't been heard in the past, not just Palestinians."

Back in November, after the student council meeting at the University of Michigan, Rami Ebrahim, vice president of the pro-Palestinian group that introduced the divestment resolution highlighted the dangers of being on the blacklist.

He said such publicised accusations may get in the way of students when applying for jobs.

Ebrahim explained that Canary Mission creates a power dynamic in the debate between Israel's advocates and pro-Palestinian students.

"When people go up and speak about Palestinian human rights, it ends up affecting their career," he told MEE last year.

"It was intended to scare allies from speaking," she said of the website's aggressive targeting of University of Michigan students.

Hamzah Raza, the co-author of the Grayzone report, said he hopes his research can stop the "defamation and harassment" of students and faculty who speak in favour of Palestinian rights.

"We intend to do this by taking away the anonymity that Canary Mission hides behind," Raza told MEE in an email. "Hopefully, the students victimized by Canary Mission are able to take legal recourse for any harm the website has caused them. We expect a more full understanding of the key personnel behind Canary Mission to emerge this year, and will contribute to holding them accountable for their borderline criminal assault on personal privacy and free speech."

Raza had been a victim of Canary Mission himself, with a 3,800-word profile detailing his activism and accusing him of supporting terrorists and demonising Israel.

"At best, to have a Canary Mission profile leads to unneeded emotional and psychological stress," Raza said. "At worst, it leads to the loss of employment, denial of entry into countries, and FBI investigations."

I do not think that it's capable of breaking the movement as a whole because way too much has been revealed about the colonial history and nature of the state of Israel; people cannot unlearn that collectively.

Raza, a Vanderbilt University graduate, said the broad charges levelled by Canary Mission are only backed by feeble evidence obtained from social media.

For example, Raza's profile includes a Facebook link where he asks people to donate to the Council on American-Islamic Relations (CAIR), a civil rights group demonised by far right activists.

"These accusations pushed against me were far from from accurate. But Canary Mission did throw me into a state of panic," Raza wrote in his email.

This tactic is especially harmful for Palestinian students who may be denied entry to Israel when going to visit their families.

In March 2017, Israel passed a law that bans BDS advocates from entering the country. 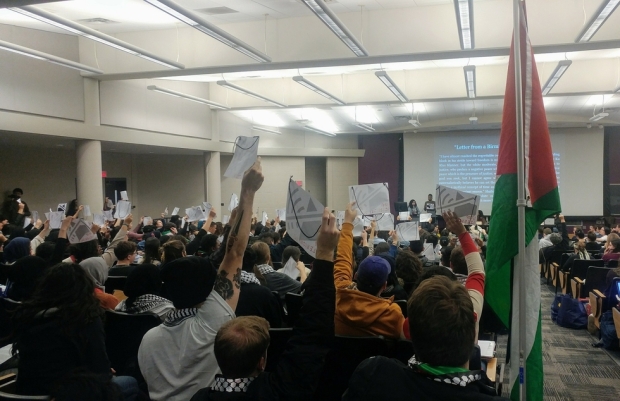 Raza said he turned down a chance to join a delegation visiting Israel and the Palestinian territories because of his Canary Mission profile.

Indeed, Forward magazine reported earlier this month that Canary Mission was being "used as a source" by Israeli officials.

In a country where most politicians at the national level support Israel as a default position, US college campuses have emerged as a forefront for debate on the Israeli-Palestinian issue. Several academic institutions and universities' student councils have passed resolutions backing various forms of BDS against Israel.

Patrick Higgins, a PhD student in Arab History at the University of Houston, said the viciousness of the response from pro-Israeli groups, including Canary Mission, shows a growing consensus in support of justice for the Palestinian people.

"I do not think that it's capable of breaking the movement as a whole because way too much has been revealed about the colonial history and nature of the state of Israel; people cannot unlearn that collectively," Higgins who has been targeted by Canary Mission said of the website.

"At the same time, I think it can damage the reputation and well-being, both psychological and materially of individuals. We should take it seriously for that reason."

Jawad, the University of Michigan graduate, said she was afraid for her personal safety after troll accounts following Canary Mission started taunting her on Twitter.

"When you google my name, this comes up," she said. "How is it going to be perceived?"

Jawad added that she was ready to charge back and use her profile on the website to speak up against Canary Mission.

Like other students and professors targeted by Canary Mission, Jawad has reported the website's Twitter account to the social media giant, whose guidelines prohibit harassment of users.

"You may not engage in the targeted harassment of someone, or incite other people to do so. We consider abusive behavior an attempt to harass, intimidate, or silence someone elses voice," Twitter's policy on hateful conduct reads.

"Accounts can be blocked or muted, and reported to our teams at any time," Twitter spokesman Ian Plunkett told MEE via email. "Those in violation will face punitive action, as appropriate."

Without the protection of anonymity, the owner of Canary Mission can now be challenged in court. And Jawad said many students are contemplating legal action.

Abed Ayoub, the legal director of the American-Arab Anti-Discrimination Committee (ADC), a Washington DC-based civil rights organisation, said while the First Amendment of the US Constitution grants freedom of speech, there are limits.

Social media and the vast information available on the internet have created challenges to countering illegal speech, including libel and incitement.

Ayoub explained that a website dedicated to harming people should expect lawsuits and legal challenges.

He called Canary Mission's methods "dirty tactics" that need to be addressed with the "fullest force".

No safe place for civilians in Idlib