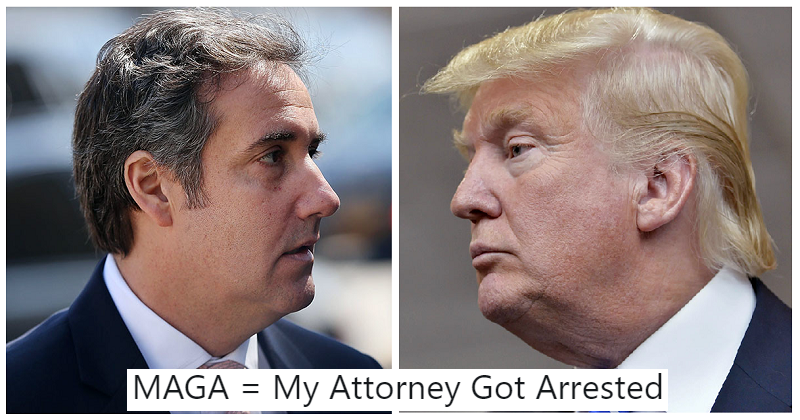 Donald Trumps former lawyer and fixer – his go-to guy for paying off alleged mistresses – Michael Cohen, has pleaded guilty to fraud relating to the 2016 election, implicating the President in the crime. This follows on from the conviction of Trumps former campaign manager on eight counts involving financial crimes.

You could say this is “yuge”. Needless to say, the internet has chimed in with one or two witticisms at the expense of the Great Orange One and his buddy.

These 16 are our favourites.

WILL YOU BE MY LAWYER? THEY TEND TO DO A LOT OF JAIL TIME SO I NEED SOMEONE YOUNG pic.twitter.com/2spPTjf3Rb

Remember back when Michael Cohen hadnt pleaded guilty and Paul Manafort hadnt been convicted? We were just crazy kids then, not a care in the world.

Ive fixed that for you. Youre welcome. pic.twitter.com/OPAflBmKOF

The popular kids call this a “burn”

MAGA = My Attorney Got Arrested

I love how media just casually refers to Michael Cohen as Trumps “Fixer.”

I dont have a “Fixer.” Ive never met anyone who has a “fixer.” I dont remember any President ever having a “fixer.”

However, you know who did need a fixer? WALTER WHITE IN BREAKING BAD.

Teachers should be scared: AfD party website allows students to inform on staff

Brian Kilmeade: Fox News and Breitbart Are Successful Because We Do Not Ignore ‘Flyover Country’