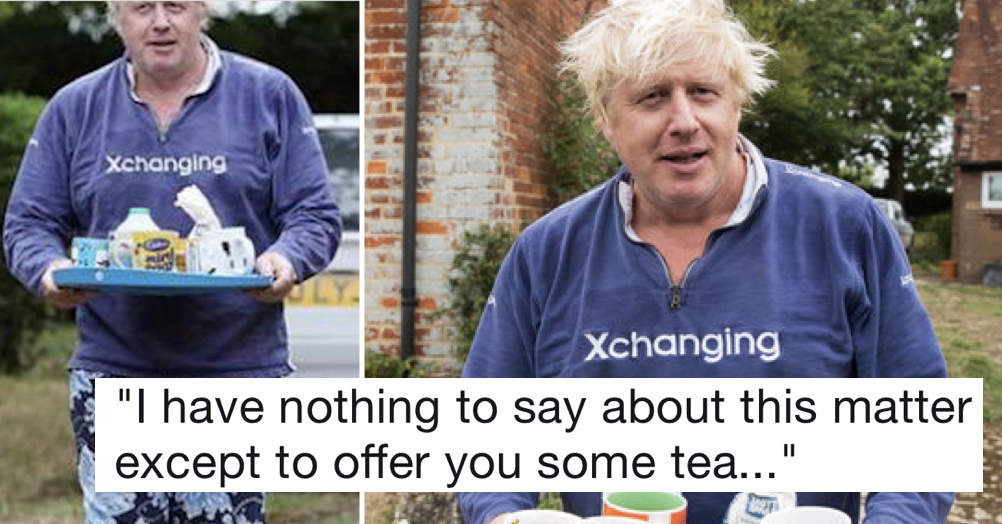 As the Conservative Party investigates Boris Johnsons descriptions of niqab- and burqa-wearing Muslim women as looking like letter boxes and bank robbers, there has been a spike in racist attacks using those terms. Meanwhile, the former Foreign Secretary decided to bring a tray of tea out to the journalists who had been at his gate all day.

"I have nothing to say about this matter except to offer you some tea…" @BorisJohnson greets the media armed with a tray of mugs amid burka row pic.twitter.com/5wknsuUBTH

The diversionary tactic hasnt impressed everyone, however. Including these people.

When you set the whole country on fire for something you dont really believe in then incite racial hatred all for personal gain but still want to show what a nice guy you are. https://t.co/0EadiZ64t9

This one is old as the hills. You know who brought me a cup of tea on the doorstep? Max Clifford. https://t.co/ERuPNsIXgN

Hes trying to mug off the nation https://t.co/h9hFJ9f8EH

Its like he WOULDNT tread over your dying body to get to where he wants and not look back, isnt it??? What a card

You take that fucking tea, youre not a journalist. Also, you have a once in a lifetime opportunity to not only doorstep this guy, but letterbox him. https://t.co/XBP30DdY3i

There is nothing innocent about Boris Johnson offering journalists a cup of tea in exchange for offering an apology. It is another clever move by the “xchanging” man, to resort to tea, quintessentially British, to get the masses smiling again.
Remember Steve Bannon is behind him. https://t.co/anBdJydBni

Boris Johnson: *is racist, homophobic, ruins the country for self-interested political gains*
Also Boris Johnson: "Hello there! Would you like a cup of tea?"
The British public: pic.twitter.com/u9Yh4u5kW8

Boris Johnson arrives in front of reporters with cups of tea. 52% of the reporters wanted tea. 48% wanted coffee. Boris Johnson shouts FUCK YOU EVERYONE GETS TEA NOW ANYONE WHO WANTS COFFEE IS A TRAITOR as his nose starts bleeding and his eyes roll back into his head

“Drink the tea, you gullible fucks. Drink the racist tea.”pic.twitter.com/VeiqrOfER4