Tens of thousands of Palestinian Israeli citizens led a march through downtown Tel Aviv on Saturday night protesting a law passed last month that downgrades the rights of non-Jewish citizens and decrees that Jews – domestic and foreign – have exclusive national rights.

Higher Arab Monitoring Committee chair Mohammad Baraka, who called for the protest and has joined rights groups in petitioning Israels high court against the Nation-State Law, referred to the controversial legislation as the “apartheid foundation law” and “an abomination”.

“Today, there is no constitution in the world that has a clause that makes the state and its purpose the property of one ethnic group, determining that it is exclusively the state of a specific ethnic group,” Baraka told the crowd in the arts district of downtown Tel Aviv. “There is not one constitution in the world that does not include in its clauses the right to equality for all of its citizens and residents.”

“We are here together,” he added, “Arabs and Jews, to say its unacceptable – neither apartheid nor genocide.” 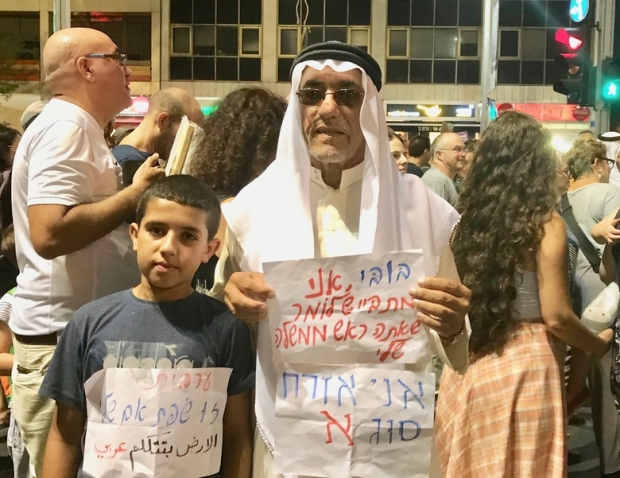 Protesters and passersby witnessed a rare scene in Tel Aviv: the visible presence of Palestinians in Israels overwhelmingly secular economic and cultural capital.

Elders wearing thawbs, headdresses and other traditional Arab clothing mingled alongside Palestinian youth in T-shirts, jeans and kaffiyeh scarves. As protesters assembled in Rabin Square in front of Tel Aviv City Hall, dozens of Muslim men prostrated themselves in neat rows, conducting evening prayers before the start of the march.

Palestinians from Galilee, the Triangle region, Naqab desert and other regions of the country were seen among the crowd.

“We are not second class!” chanted throngs of protesters, raising banners that read in both Arabic and Hebrew: “Nation-State Law – Official Apartheid”.

Palestinian flags proliferated and were a source of friction between some of the participants, mirroring online arguments that preceded the demonstration.

In the days leading up to the event, Israelis argued over acceptable slogans and symbols, making their participation conditional upon permitting some and forbidding others. Liberal Zionists threatened to boycott the protest if Palestinian flags were featured, while radical Jewish activists countered that they would refrain from attending if Palestinian flags were unwelcome.

The crowd may not have reached a consensus, but their ideological differences did not boil over and the marched proceeded as planned. 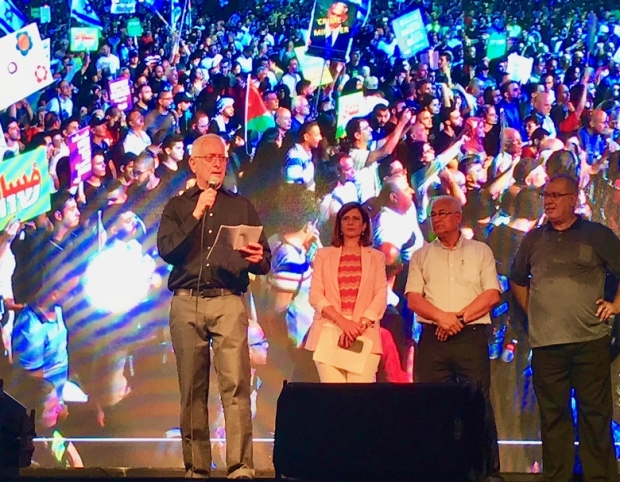 “The new generation will not accept this humiliation,” one young Palestinian protester told Middle East Eye. “We are aware and we are active. We are here.”

Halil El-Okbi and his 11-year-old son drove up to Tel Aviv from the Bedouin township of Hura to attend the protest. “Even without this law, we were discriminated against,” El-Okbi said.

“We were here hundreds of years before the establishment of the State of Israel. We were kicked off our land in 1951, and today we live in unrecognized villages without electricity and water,” he said.

The thousands of Israeli Jews who joined the protest in solidarity included supporters of anti-occupation group Peace Now, members of the anti-racist group Standing Together, and Amos Schoken, publisher of the liberal daily newspaper Haaretz.

Anti-racist activist Tomer Saado told Middle East Eye: “I am an Oriental Jew who has suffered from discrimination because of my skin color, so its very easy for me to be in solidarity and to deeply understand the Palestinians and what the Nation-State Law means for them.

“Those who are unaware of these experiences believe that Israel is a democracy in which everyone is guaranteed freedom, respect and recognition. This is an illusion that bursts daily for many people,” Saado added.

Once the crowd reached the museum district, a series of Palestinian and Jewish speakers blasted the new law, calling for freedom and full equality, regardless of race or religion.

“There is nothing more dangerous,” Tel Aviv University researcher Maha Karkabi told the crowd. “The Nation-State Law does not ignore the rights of the minority – it is here to eliminate them.”

Ten of thousands Jews & Arabs are gathering in Tel Aviv against the #NationStateLaw and Netanyahu's government.

This might be the largest Jewish-Arab demonstrating event in Israel's history. Solidarity.#Amazing pic.twitter.com/S0ZcH2qTr8

Author and sociology professor Eva Illouz also spoke from the stage, saying: “I give up my privileges as a Jew – privileges which I never asked for.”

“I live in a racist state.” law intern Maha Ighbaria told the crowd. “Its time that the international community recognizes Palestinians inside Israel. They must understand that solving the conflict is impossible as long as we continue to be excluded.”

In his address, Baraka denounced Prime Minister Benjamin Netanyahus offer of a package for Druze citizens to compensate their community for downgrading their legal status.

The Druze are a small religious community that constitutes about two percent of Israels citizens. Unlike other indigenous Arab communities, most male Druze serve in the Israeli army.

Last week, Rabin Square was filled with tens of thousands of Druze citizens and their supporters protesting the same law, offended that even though they risk their lives in service to Israel, they are to be deprived of equal rights.

Civil rights groups say Israel has been discriminating against its non-Jewish citizens since the state was founded in 1948, pointing to dozens of Israeli laws that mandate preferential treatment to Jews.

The Nation-State Law is expected to have a more lasting impact, however, as it would enshrine a two-tiered system of rights in a basic law. In Israel, basic law is the equivalent of constitutional law, requiring government bodies to interpret policy accordingly.

The Nation-State Law also gives Hebrew superior status over Arabic, making the former the states only official language, and demoting the latter to a “special status”.

Before it was passed in July, some supporters of the law hoped to assuage the bills critics by claiming that its only significance would be symbolic. This week, however, some Israeli ministers allowed that they intend to use the law to ensure Jews continue to dominate the country demographically, and that ratio of Jews to Palestinians does not slip on the national level or even regionally.

At a cabinet meeting on Sunday, Netanyahu said the law “grants an automatic right to Jews, and only to them, to come here and receive citizenship. The Nation-State Law, for example, prevents the exploitation of the family reunification clause under which very, very many Palestinians have been absorbed into the country.”

Saudis will respond with ‘greater action’ if sanctions imposed over Khashoggi