Brad Fittler has handed Tom Trbojevic a licence to torment Queensland's maligned forwards alongside game one hero James Tedesco as the Blues plan to unleash an all-out assault in the middle at ANZ Stadium.

Having watched Jarryd Hayne deployed in a similar role last year, Trbojevic is set to work in tandem with Tedesco around the ruck as a second floating fullback during the game two clash on Sunday night.

Trbojevic, who scored a decisive try for NSW in their come-from-behind win at the MCG, only occasionally abandoned his right wing during the State of Origin series opener.

But the 21-year-old Manly flyer is intent on wreaking more havoc with the fleet-footed Tedesco on the Maroons' tiring forwards as NSW seek to seal just their second series win in more than decade.

"Freddy has given me a licence to roam a bit so I'll be looking to do that," Trbojevic said. "I've spoken a little bit about it with Freddy. I got to do it a little bit in game one and I'm hoping to have a similar effect late in halves when the middles are tired."

It's the clearest sign yet the Blues plan to run Queensland off their feet with even greater effect on a notoriously greasy ANZ Stadium after Tedesco and electric hooker Damien Cook starred in game one.

Former NSW coach Laurie Daley used Hayne as a second fullback during last year's series and given Trbojevic usually wears the No.1 on the northern beaches, a Tedesco tag team could hold the key to the Blues' chances of avoiding a Suncorp Stadium decider.

Asked whether his fleeting presence in the middle may have helped Tedesco taunt the Maroons in game one, Trbojevic said: "I think Teddy's a great player and what he did in game one was not down to me.

"He's just a great ball runner and the way he carved out that middle up, hopefully he can have a similar effect on Sunday."

While Trbojevic will be given the chance to bob up in different parts of the ground, there is much interest in how Queensland will use their whiz kid Kalyn Ponga on his Origin debut.

One such theory is for the Maroons to inject Ponga into the halves and shift Ben Hunt to hooker to give Andrew McCullough a break, but NSW will also be conscious of Ponga and Billy Slater working alongside each other in dual fullback roles ala Tedesco and Trbojevic.

Despite his varied attacking role, Trbojevic was bizarrely the subject of a number of Ben Hunt bombing raids at the MCG despite boasting a clear height advantage over his opposite Valentine Holmes, who he mugged a decisive NSW try.

And he would have no qualms if the Maroons pepper his flank again with a number of high balls.

"I don't know if it was a strategy from them, it was just more where they finished their sets," Trbojevic said. "They were in that corner so it was the easy kick. It was hard to work out of a corner.

"But you do [get confidence taking those bombs]. It's another game on Sunday and you have to take your opportunity and I'll put my best foot forward to try to catch them all again."

Some of the remnants of the NSW squad that squandered a game two lead last year and were outplayed in a series decider at Suncorp Stadium are still trying to forget the 2017 fade out now they find themselves in a similar situation.

"I think last year took a lot out of me," five-eighth James Maloney said. "I remember my wife saying to me at one stage, 'I know you're dirty and you're hurting, but we're here to help'.

"I was cranky for a while and snappy at the kids. It's not ideal. It's the mental drain it takes because it's important to you.

"This is my fourth series and the third time I've been one-up. I probably understand more than [most] there's still a long way to go and a lot of work to do. I tried to talk to the boys at different stages about that."

Added Jake Trbojevic: "We'd love to wrap it up in Sydney. This is our opportunity and we've got to take it with both hands. We let it slip [last year]. You never forget that stuff and never really get over it. That's disappointing. We've got to try to get it done this week."

Adam Pengilly is a Sports reporter for The Sydney Morning Herald. 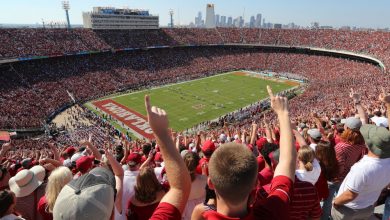 Texas And Oklahoma Plan To Move To SEC