Justin Langer's reign as Australia coach has begun with a defeat as his side lost the first one-day international against England at The Oval in London by three wickets.

New captain Tim Paine won the toss and elected to bat in perfect conditions only for his side's batting woes to resurface once again as they were dismissed for just 214 in 47 overs.

Despite the hugely under-par total, a rookie Australia bowling attack did their best to force what would have been a stunning victory but England reached their target with six overs to spare, finishing at 7-218.

Giant paceman Billy Stanlake was the pick of the attack, but he was ably supported by debutant Michael Neser and Andrew Tye with the trio taking two wickets apiece.

The 204cm tall Stanlake bowled Jason Roy with the second ball of the England innings and also dismissed Joe Root (50) to finish with figures of 2-44.

England's response got off to a shaky start as they slipped to 3-38 but, led by skipper Eoin Morgan (69) and Root, they recovered to 3-153 before Australia fought back to reduce the hosts to 7-197.

However, David Willey got his team over the line, finishing 35 not out to give Morgan's side a sixth ODI success over Australia in their last seven meetings.

Glenn Maxwell (62) and Ashton Agar (40) were the pick of the Australian batsmen, putting on 84 for the sixth wicket after their side had slumped to 5-90.

It was the spin of Moeen Ali and Adil Rashid that did the damage.

The pair took five wickets between them, tying up the Australian batsmen who got off to a decent start at 1-47.

Aaron Finch perished for 19, becoming the first of Moeen's three wickets, and his exit precipitated a middle-order collapse as four wickets fell for 43 runs.

Shaun Marsh became Moeen's second victim, playing no shot to an innocuous-looking delivery and was bowled for 24.

Paine moved up the order to come in at No.5 but departed for 12 after his reverse-sweep lobbed gently into the hands of Mark Wood to hand Moeen his third wicket.

Marcus Stoinis, who scored a century against Sussex last week, never looked fluent and he went for 22, feathering a Rashid delivery into the gloves of Jos Buttler.

Such was the hold that the spinners had over the batsmen, just three boundaries were scored in 19 overs.

Maxwell did manage to show some attacking intent with two fours and a six from Moeen's final six balls as he and Agar staged a recovery.

But just as he looked like giving Australia a platform for a competitive total, the big-hitting Victorian picked out Bairstow on the boundary off Liam Plunkett.

Agar became Rashid's second victim when he was trapped lbw for 40 as Australia were reduced to 7-193.

Andrew Tye (19) hit some shots to get the tourists past the 200 mark before Plunkett and Wood wrapped up the tail. 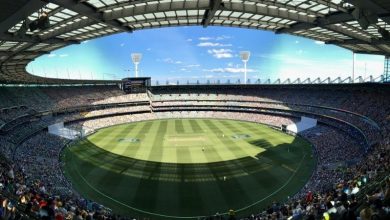 Premier Daniel Andrews ‘confident’ 80,000 plus fans can attend the Boxing Day Test at MCG this year