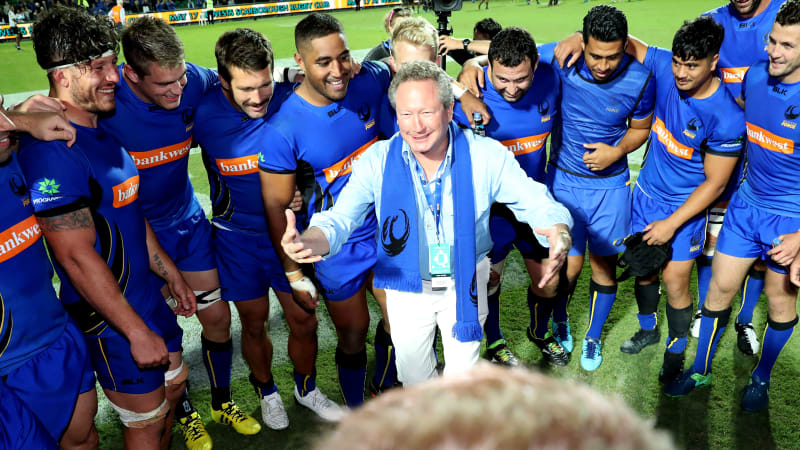 The Melbourne Rebels overcame an early scare to beat the Western Force 28-12 in a spiteful World Series Rugby clash on Saturday night.

The grudge match lived up to expectations as both sides slugged it out – both in rugby and biffo terms.

The Force led 5-0 courtesy of a 21st-minute try to prop Harry Lloyd, with the Rebels still scoreless as the game ticked past the 30-minute mark.

But the Rebels kicked into gear after that to secure the four-tries-to-two win at a rain-drenched nib Stadium.

A healthy crowd of 13,907 turned up despite the bad weather.

In the lead-up to the match, players from both sides were talking up the contest as more like a love-in rather than a grudge match.

But it took less than two minutes for tempers to boil over after Force hooker Heath Tessmann and former teammate Richard Hardwick got into a scrap.

And there was even some push and shove after the final siren, before the players eventually made peace.

"I could have put my money on Tess being the first to get stuck in," Rebels coach Dave Wessels said with a laugh after the match.

"It's a contact sport. That's the point of the game. There would be something wrong with us if we didn't have a bit of feeling in it both ways.

"We'll go into the change rooms now and have a beer with each other and talk about some old times."

Force coach Tim Sampson was proud of his team's effort.

"I think it was evident tonight that we've got a pretty resilient bunch of players there that are more than capable of playing a high standard of rugby," Sampson said.

It took until the 32nd minute for the Rebels to finally get on the scoreboard, and it came courtesy of some skilful foot work.

A clever cross-kick to the wing and a dribble kick forward cut open the Force's defence, with fullback Jack Debreczeni then soccering the ball forward to touch down.

Meakes scored an easy try shortly before half time to give the Rebels a 14-5 advantage at the break.

The rain poured down early in the second half as the teams continued to slug it out.

Rebels flyhalf Tayler Adams silenced the crowd in the 53rd minute with a 70m intercept try, and the Force were kept at arm's length from there.

The Force and Rebels were locked in a desperate fight for survival last season, with Rugby Australia's axe eventually falling on the Force.

“Class of ’92” get green light for new sports business university