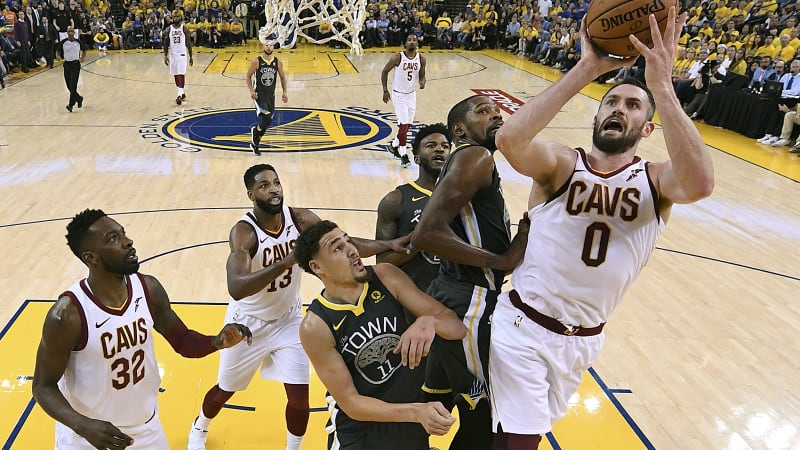 The NBA universe held its collective breath for a few seconds as LeBron came down on his ankle and winced in pain. But LeBron knows no ankle injury, he has battled on, just scored a contested layup and forced another time out from the Warriors.

Cavs up 42-34 and Kerr is angry with rookie Jordan Bell for not stepping up earlier when LeBron drove in…..small errors count for a lot in NBA Finals….

LeBron clearly pushed off on Kevin Durant after the Warriors star pushed up the court to defend LBJ….Warriors score, LeBron gets one at the other end.

Now Livingston scores too. Tempo has come gone up. Cavs ahead 37-32 7 minutes to go in quarter.

I think he is talking about Draymond

LeBron has quietly gone up to 10 points, five rebounds, five assists and his side leads 35-28 and Warriors have called time out as Steve Kerr was struggling to communicate a play call to his players.

Kerr says his side was in danger of fouling too much but corrected their problems and rode KD to stay in the game.

Doris Burke asks him what makes KD so good in these games, Kerr says "I love everything about Kevin Durant".

The Cavs have had their best run of this whole finals and only have a one-point lead to show for it.

Outstanding end to the term from the Warriors who had 13 points and seven rebounds from Durant and managed to tie the scores late in the term before sneaking ahead on a Jeff Green corner three.

But Warriors very much in this game, considering how great they are in third terms they could setup the win tonight with a strong second quarter….it will leave very little margin for error for the Cavs….

Klay Thompson hits his first three and the Warriors first make from down town, they were 0-6 to start.

KD has followed with another three. 26-22 Cavs with a minute to go in the first quarter….

Rodney Hood is into the game for the Cavs, he missed his first shot but will be a key player to watch tonight, they would love 10-12 points from him.

Thompson has been outstanding so far, rebounding and making the Warriors earn everything inside….

Curry gets a left-handed layup, KD a putback and now the lead has been cut to 20-12 with five minutes to play in the quarter.

Really nice fightback from the Warriors but they do need to get a hand up on JR Smith who has seven points already.

Staying in this game will be pivotal for the Warriors, they can't be chasing the Cavs in the fourth quarter….

Barrett made to work alongside Hasler as Manly refuse payout

How the Pies learned to play the sustainable game