Few foreign journalists have had the chance to cover Kim Jong-un firsthand, but RTs Ilya Petrenko became one of them, when he accompanied Russian FM Sergey Lavrov for a visit to the North Korean leaders private palace.

Hours before the Russian foreign minister was due to meet Kim on Thursday, the traveling journalists, who had not been handed a schedule of the meeting, were assembled in a room of “what is by North Korean standards a luxury hotel” in Pyongyang and searched, before all their communication devices were taken away by security officials. The RT crew was then directed to an unmarked minibus, and driven through the Korean capital.

“We had no idea where we were going, and the driver spoke neither English nor Russian,” says Petrenko. “The further we traveled, the fewer people were visible on the streets outside, until the roads were drove on were altogether empty, though there was no police cortege.”

Finally, a massive building stone decorated with two giant posters of Kims grandfather and father, the two previous rulers of North Korea, drifted in view, and a little later in a more secluded part of the sprawling complex, another, smaller, luxurious villa. This, the journalists realized, was the Pavilion of the Hundred Gardens, the leaderships personal reception palace.

A wooden door opened, and a female figure appeared. In a moment, Petrenko recognized the person in front of him: the leaders sister, Kim Yo-jong, who has been credited with softening North Koreas image abroad during the Olympics and recent negotiations with Seoul.

“Dressed in a gray skirt suit she was hovering around the entrance, like the lady of the house. I greeted her in English, and she smiled back and said Hello!” recalls Petrenko.

Then Kim Jong-un himself came out. “Wearing an expensive watch,” and “as tanned as his sister was pale,” the North Korean leader seemed “relaxed and in control,” nodding to acknowledge the press. 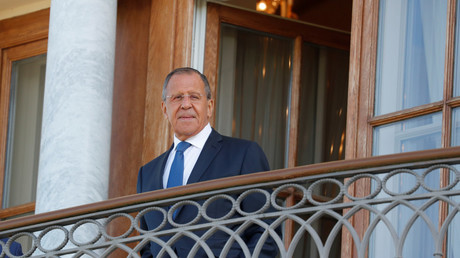 “He did not appear like a man out of touch with reality,” notes Petrenko.

Throughout the afternoon Yo-jong served as a close personal aide to her brother, “helping him with nuances of protocol.”

But once the talks began, Lavrov sat with a team of seven negotiators and interpreters. Kim, on the other side of the table, sat alone, with only a single interpreter to help him.

Soon the photo call was over, and the journalists were ushered away, as Lavrov and Kim talked confidentially for an hour. At the end, both emerged, apparently satisfied and smiling, for the Russian diplomat to gift the North Korean a traditional Russian box, with a lockable compartment “to keep his secrets in.”

Then at once, as quickly as it began, the surreal spell dissipated. The journalists were hastily seated in vehicles, handed back their phones, and whisked off in a motorcade directly to the airport and out of the country.

“I have no words. I imagine most North Korean journalists do not have a chance to set foot in the places where we have been. Its an unforgettable experience,” says Petrenko.