How to get a head in photography

Tunisia's president has been criticised at home for being eclipsed in a picture by the renegade Libyan general Khalifa Haftar, according to the London-based newspaper al-Quds al-Arabi.

Beji Caid Essebsi faced hostility on social media for the picture, taken at the recent Paris conference to solve the political crisis in Libya.

Only the top of the petite president's head can be seen as he stands behind Haftar.

Some said the photograph was disrespectful to the authority of the state, while others were surprised that Essebsi stood behind a "military commander accused of committing crimes against humanity".

Imed Daimi, an MP, said: "We can only see what is left of the authority of the state in this picture."

Another Tunisian, named Kamal, stated: "Beji did not go to the Palestine summit in Istanbul, but he rushed to Haftar's!

"He has turned a blind eye on the case of Jerusalem, and is then blinded by Haftar in this picture.

"Beji is affected by the curse of Jerusalem in this photo. How could he stand behind a murderer who is killing the Libyans without trial, accountability, or even accusation?" He's behind you.. Essebsi eclipsed by Haftar (supplied)

Algerian airports have been declaring a state of emergency after the Saudi consulates decision to suspend visas to visit Mecca and Medina (Umrah), leaving pilgrims stranded, says the Algerian newspaper al-Khabar.

Local government agencies were forced to intervene to alleviate the crisis at airports and ease overcrowding.

The newspaper stated the crisis caused heavy losses for travel agencies because many of these agencies have paid the cost of hotel reservations for their customers.

The Saudi consulate has not provided a reason for the ban on visas.

Kuwait's ambassador to the UN, Mansour al-Otaibi, has said his country will ask for a vote in the Security Council on Thursday for a draft resolution seeking international protection for the Palestinian people, according to the London-based Arab newspaper Asharq al-Awsat.

The newspaper stated that US envoy Nikki Haley threatened to use a veto in order to block the Kuwaiti bid, hours after Kuwait suspended a draft statement circulated by Washington to "condemn in the strongest possible terms" both Hamas and Islamic Jihad movements and ignore Israeli abuses and victims in Gaza.

The moves have occurred at the UN after Egypt managed to pass a ceasefire agreement in Gaza. This agreement has been put into action on Wednesday morning and everyday life has more or less returned to the streets of the Gaza Strip, where no violations were recorded, with both parties (Israelis and Palestinians) being keen on avoiding escalation, according to Asharq al-Awsat.

The UN High Commissioner for Refugees (UNHCR) launched an appeal from Jordan to rescue a programme supporting Syrian refugees, and warned against the effects of lack of funding, according to the Jordanian newspaper al-Ghad.

"UN organisations have called for $5.6bn in aid to support Syrian refugees in the region, but received only 18 percent to 20 percent of the requested amount,” the UNHCR said.

The agency fears that aid will be cut off and some necessary programmes will be halted. More children will stay out of schools, more patients will not receive their treatment, more children will be abused into labour and more underage marriages will occur, according to al-Ghad newspaper.

Saudi Arabia to launch ethical charter for social media use 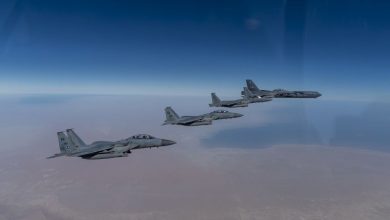 B-52 Bombers Return To Mideast Amid Afghan Pullout