"It just means that women — and the men who love the women of Ireland — have spoken out and they've said times have to change. And they are going to change now," a tearful Mellet said at the Royal Dublin Society, where the count took place throughout the day. A crisis pregnancy for Mellet in 2011 became an important step in the fight against Ireland's constitutional amendment that bans abortion in almost all circumstances. She was forced to choose between carrying a non-viable pregnancy to term, or travelling abroad for a termination. She chose the latter, and in June 2016, the UN's Human Rights Council ruled that the country's abortion regime subjected her to "cruel, inhuman and degrading treatment," and called on the Irish government to reform its laws.Now, voters in Ireland have had their say.Under a blistering sun in Dublin Castle across town, thousands of people chanted "Yes" as they waited for the final results to be announced. They arrived to celebrate early because an exit poll released by Ireland's national broadcaster RTE signaled that a victory was in store for yes voters — who had advocated to repeal the amendment — defying earlier projections that the race would be tight. 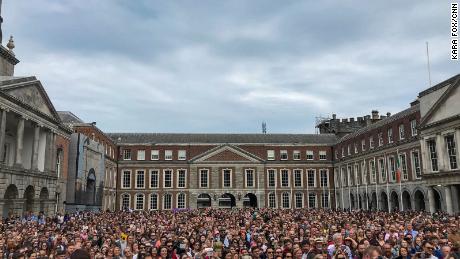 Scores of other abortion rights activists gathered across Dublin throughout the day. Dr. Ruth Cullen, a spokeswoman for the anti-abortion LoveBoth campaign, conceded defeat Saturday before the count had finished.Clare Comran was at the count, where she watched as all Dublin constituencies were declared overwhelmingly in favor of repealing the amendment, including one area that voted yes at 78.5%. Comran said she had always hoped Ireland would make the "leap forward" and had recently noticed a shift in national attitudes. The Irish people, she said, were "really ready to embrace progress and trust themselves." "It feels really lovely to be trusted and to feel like a whole person in my country. I've never had that in my entire life as an Irish person," she said, adding that she was grateful for the groundwork that women's rights activists had done to arrive at this moment. 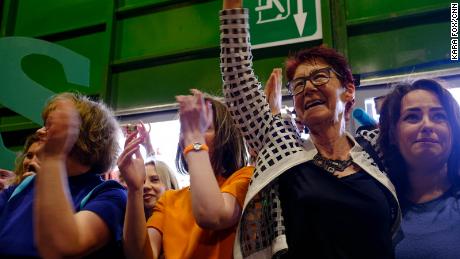 Ailbhe Smyth, a veteran campaigner and co-director of Together4Yes, the national pro-repeal group, is one of those women. As she arrived to the count, she was greeted with roars of applause from supporters, who thanked her for her longstanding efforts. Smyth told CNN that the road to get to this day had been a long and hard one, but the result marked a seismic shift for the country. "Irish people are clearly standing up and saying of course the lives of women in Ireland matter. It's a great victory for equality for freedom for dignity for human rights, — and not only for women," Smyth said. A baby's murder opened a dark chapter in Ireland that still hasn't been closedMark Hickey, a no voter, observed the count with two other anti-abortion campaigners and was not celebrating. "Truth is not established by popular consensus," he said. "We will look back at this moment in history at being a very grey one."Lawmakers are expected to vote on legislation providing for terminations in the first 12 weeks of pregnancy — and later in cases where there is a risk to the mother's life or the fetus is not expected to survive by the end of the year. Not far from the polling station, a more somber atmosphere was felt at the mural of Savita Halappanavar, a 31-year-old woman who died in 2012 from a septic miscarriage in Galway after being denied an abortion. 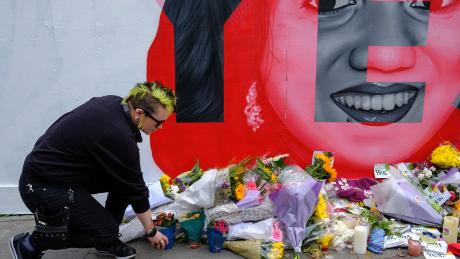 John Howard, 28, brought a bouquet of flowers to the site."Her story was one that captured the realities of what the Eighth Amendment meant in a material, tangible way," he said. "It took the life of a woman. Her memory is a bit of an avatar for change — and for the direction that we'd like Ireland to take. Her story encapsulates what we'd like to never see again and hope that whatever changes can be made in her honor."Others left notes. One read: "If I have a daughter, I will name her Savita, after you."'Irish abortions happen; they just don't happen on Irish soil'By late afternoon, thousands of supporters had gathered in Dublin Castle, where a festive atmosphere was unfolding among a crowd of all ages. 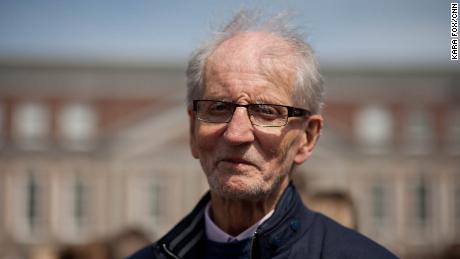 Brendan Lynch, 81, was standing between a group of young people drinking sparkling wine and a mother whose children had fallen asleep in their stroller.He said he was happy Ireland had moved on from its past, one where the Church "controlled everything." He acknowledged that he was an outlier in his age group, nodding to RTE polls that demonstrated voters 65 and over were the group with a majority vote for no. "I never thought I would see this day," he said. "I'm absolutely delighted, and I feel sorry for all the women who had to go to England to have abortions. But now those days are over." 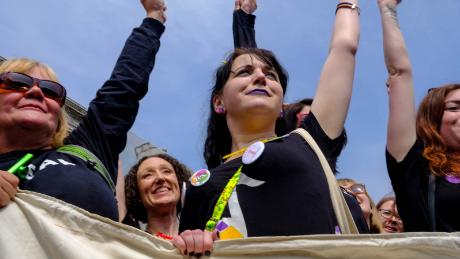 Moments later, a chorus exchanged classic rock lyrics for feminist rhymes as a group of women dressed in angel costumes walked by. As the final results trickled in, the skies briefly opened. An Irish mist sprinkled over the crowd, but the mood was not dampened. The Friday turnout was 64.13% — a record high. The country's Referendum Commission said 1,429,98 (66.4%) voted for the amendment and 723,632 (33.6%) voted against. Emma Gallagher, 22, was crying with joy moments after the referendum passed. "I feel safe now, I feel comfortable," she said. "It felt for a long time women didn't matter…now we know that we matter." 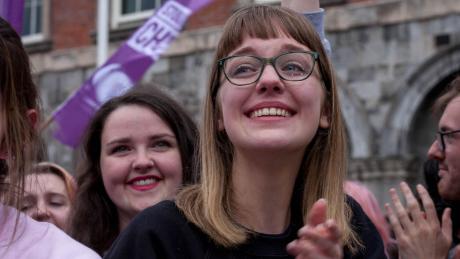 Next to her was Rene Wogan, a 66-year-old woman who said she didn't vote in the 1983 referendum — which placed the abortion ban into the constitution — for fear of speaking out against cultural norms of the time.Wogan said this time was different and held Gallagher's hand in solidarity. "It was all for justice," she told Gallagher. "You're forwarding the flag on for women."Ireland's Prime Minister Leo Varadkar said in a press conference that a "quiet revolution" had taken place.In the square, a crowd of some 5,000 supporters roared, "We did it."

Aid organization warned it could lose millions in funding