Europeans are angry over the latest US-imposed set of sanctions harming EU interests in the wake of Donald Trump quitting the Iran nuclear deal. The EU needs to decide whether to finally stand up for itself, analysts told RT.

Aside from imperiling a landmark international accord and endangering regional and global security, the US pull-out from the 2015 agreement with Iran will have crushing economic consequences for Europe. French, German and UK firms stand to lose billions of euros in investments and trade if they are forced to comply with the sanctions that will be re-imposed and expanded now that the US is no longer a signatory of the nuclear deal.

Now, facing the ruinous economic and political fallout from Washingtons unwillingness to honor its agreements, Europe has signaled that it may choose to pursue its own interests – as opposed to obediently swallowing what the US dictates.

“At the moment, theres a lot of anger in Europe about [US President Donald] Trump and the way hes pulled out of the Iranian nuclear deal. European politicians are reacting to that anger,” journalist Neil Clark told RT. He noted that Europe faced a similar predicament following the 2014 Ukraine crisis, when the Barack Obama administration rolled out sanctions aimed at Russia. Back then, Europe went along with the sanctions that “were clearly not in the interest of EU nations,” but now the discontent seems to have reached the boiling point. “The key thing is: What actions will follow?” Clark notes.

It remains unclear whether Brussels will take matters into its own hands – even as top European officials are making highly critical statements about their American allies. The loudest has probably come from Jean-Claude Juncker, the president of the European Commission, who, on Wednesday, suggested that the EU should “replace” the US in the global arena.

“At this point, we have to replace the United States which as an international actor has lost vigor, and because of it, in the long-term, influence,” Juncker said, accusing Washington of being unwilling “to cooperate with other parts of the world.” For now, the top Eurocrat offered no actual roadmap leading to the blocs superpower status that could rival the US.

Federica Mogherini, the EUs foreign affairs chief, was more cautious in her State of the Union speech on Friday, but she stressed that the EU is “determined” to work and deliver on the Iran nuclear deal.

“I know that this is not the mood of our times. It seems that screaming, shouting, insulting and bullying, systematically destroying and dismantling everything that is already in place, is the mood of our times,” Mogherini said, without pointing her finger at anyone in particular, adding that “the secret of change… is to put all energies not in destroying the old, but rather in building the new.” When reacting to Trumps decision Tuesday, she also pointed out that “the nuclear deal is not a bilateral agreement and it is not in the hands of any single country to terminate it unilaterally.”

France, which was apparently among those countries trying to talk Trump out of quitting the deal, did not hide its bitter disappointment. Reacting to Washingtons threats to penalize countries that continue dealing with Iran, French Economy Minister Bruno Le Maire hit at the “vassal” status of France and other European states when it comes to economic affairs with the US. 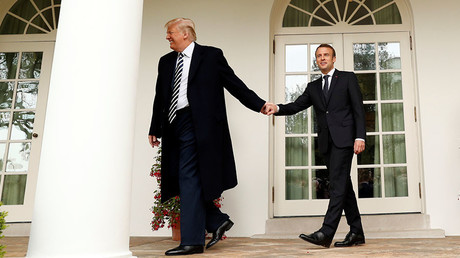 “Do we want the United States to be the economic policeman of the planet? Or do we Europeans say that we have economic interests, we want to continue to trade with Iran as part of a strategic agreement?” le Maire asked in a Friday interview. “Do we want to be vassals who obey decisions taken by the United States while clinging to the hem of their trousers?” the minister fumed.

He added that “its time for all European states to open their eyes.” The stinging comments are particularly remarkable because Paris has previously opted to acquiesce to draconian sanctions. An $8.9-billion fine was imposed by the US on French bank BNP for doing business with Iran. In 2014, the bank agreed to pay the fine to avoid being tried in court for violating US sanctions.

“Things are being said now in Europe which have not been said for a long time,” John Laughland, an Oxford-educated historian and specialist in international affairs, told RT. He believes, however, that, so far, the protest statements coming from Europe appear to be empty rhetoric. “Im waiting to see if the rhetoric translates into anything real.”

“This is a crucial turning point now in Europes history – whether a new independent Europe will emerge from this,” Clark said. “Its time for action. Is Europe ready for the role? Of course its ready. Its always been ready. It just needs the leadership to say to American: No, were going to look after our own interests,” he said.

“Until we see European companies, and European governments actively opposing the United States, we wont be able to conclude that theres been a real change,” Laughland argued.

Warning to Germany: a step too far for Washington?

Earlier this week, German Chancellor Angela Merkel assured Iranian President Hassan Rouhani of Berlins full support for maintaining the nuclear deal, provided that Tehran continues to abide by its terms. German-Iran trade stands at 3 billion euros annually. While its but a fraction compared to Germanys other trade partners, exports to Iran have seen a 50 percent increase since sanctions were lifted as a result of the 2015 nuclear deal, and German companies are not at all happy at the prospects of scaling back trade or having to dodge new US sanctions.

Good morning from #Germany, where a lot is at stake after US President Trump walked away from #Iran deal. German exports to Iran have risen since the end of sanctions in 2016 by 50% to €3bn, and keep rising. pic.twitter.com/69G94xGJ19

Adding fuel to fire were comments made by the US Ambassador to Germany Richard Grenell just hours after Trump announced the move on Tuesday. The newly-minted ambassador tweeted that German companies should “wind down” in Iran or risk being targeted by sanctions.

According to Clark, the Twitter gaffe showed Washingtons true colors – and provides yet another reason for Europe to pursue its own independent economic and foreign policies.

Ric: my advice, after a long ambassadorial career: explain your own countrys policies, and lobby the host country – but never tell the host country what to do, if you want to stay out of trouble. Germans are eager to listen, but they will resent instructions.

German Economy Minister Peter Altmaier has stated that the German government will do everything it can to “minimize the negative consequences” of US sanctions, describing Berlins strategy going forward as “damage limitation.”

And while the German government has conceded that it may not be able to shield German companies that do business in Iran from US sanctions, German business leaders say theres always a workaround. Michael Tockuss, who is with the German-Iran Chamber of Commerce Association in Hamburg, commented after the US sanctions were announced that German businesses will find a way to keep their doors open in Iran.

“Even during the sanctions time, there was business between Europe and Iran,” Tockuss noted during an interview with Marketplace. “The backbone of trade between Germany and Iran is done by these small and medium companies in the field of machinery and plant manufacturers. And these companies, they have a different risk calculation than international big operating companies. A lot of them, they don't have set ups in the United States and they are not as frightened as international operating companies. As long as there is a legal basis according to German and European law, I can guarantee you these companies will continue to do business with Iran.”

Adding Turkey to the mix

NATO ally and long-time EU member hopeful Turkey has also taken a stand against the US sanctions. Iran is a major trading partner for Ankara, and, considering the less than stellar condition of US-Turkey relations, its not difficult to imagine Turkey ignoring Washingtons orders. Already, Turkeys leaders have signaled their displeasure with Trumps pull-out.

“We dont need new crises in the region,” Turkish President Recep Tayyip said in an interview with CNN, warning the US withdrawal from the nuclear deal could have regional, as well as global, repercussions.

“The US decision on sanctions against Iran is an opportunity for Turkey. I will continue to trade with Iran, observing the terms of UN resolutions,” the minister said.

Erdogan reportedly doubled-down on Turkeys economic commitment to Tehran in a conversation Wednesday with Rouhani. Bilateral trade between the two neighbors was around $10 billion in 2016, but they have since committed themselves to expanding trade to $35 billion. Given that Turkey and Iran have also been closely working politically in the Syrian peace process, trying to drive a wedge between the two could have the opposite effect for the US.

Even if the EU chooses to honor its international agreements, how will the bloc enforce its will without the vast military power of the United States at its disposal? 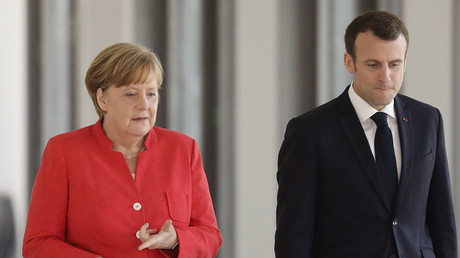 “Perhaps this crisis in the beginning of a change, but we mustnt underestimate the difficulty of there being a real change in the international system. Because the realities of power are that the United States has military bases all over Western Europe, its military spending, as everybody knows, is as much as the next seven countries put together,” Laughland said. “This is a gigantic imbalance of power, and military power of course translates into political power.”

He added: “The Europeans to say that they want to liberate themselves from American hegemony, thats a message that Im very happy to hear, personally, but it really does require actions to prove it. It requires very substantial action. And Im not convinced that those actions are possible. And the reason why Im not convinced, is that however much I may disapprove of Trumps decision, the fact is that he thinks in terms of power. The Europeans think in terms of international law.”

Laughland said that international law doesnt mean much when you are powerless. “We know that Merkel, Macron and Boris Johnson all went to Washington to try to prevent this from happening, and they failed. So that is a demonstration of their lack of power,” he said.

For Christmas stragglers like me, Scrooge is an inspiration – not an insult

How Sweden hopes to get more foreign-born residents voting