Looking to break down Monsantos monopoly on the Indian market, in April the Delhi High Court banned the St. Louis-based company from enforcing its patents on genetically modified Bollgard and Bollgard II cottonseed varieties in India. The decision was taken after Indian Nuziveedu Seeds Ltd (NSL) argued that the US seeds company was not eligible to claim patents and demand royalties from Indian seed companies.

In something of a compromise gesture, the justices gave Monsanto a three-month window to register the Bt seed varieties under the Plant Varieties Act (PVA), which would still allow the company to collect a trait fee but lose control of the plant's genetic material. The ruling would also allow Indian farmers to use Monsantos know-how for future research and development of the cotton industry.

Refusing to accept the new arrangement, Monsanto appealed the courts decision, Reuters reported on Friday. NSL, meanwhile, announced that it will uphold the court's decision.

“In the Supreme Court, we'll maintain our stand that agricultural products, including seeds, cannot be patented in India,” said Narne Murali Krishna, a company secretary for NSL. “The judgment of the Delhi High Court has already vindicated our stand.”

The US giant has been selling genetically modified cotton seed to India since 1998 and has, since then, established an absolute monopoly over Bt cotton production in the country. Some 90 percent of Indias cotton –11.8 million hectares of cotton fields– now cultivate Bt crops. However, the Indian authorities are trying to push the US-giant out of the market to create more favorable economic conditions for domestic farmers. 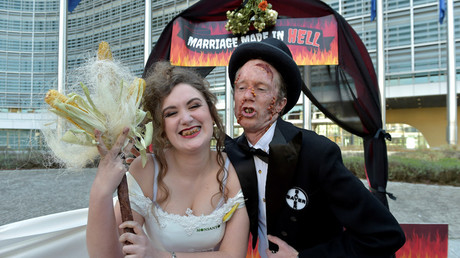 Monsanto had already threatened to stop business in India after the government imposed price controls on cotton seeds in 2016 and cut the company's royalties by more than 70 percent. In March, Monsantos royalty from Bollgard II was cut even further from 49 rupees ($0.70) to 39 rupees ($0.60) per 450-gram pack. The fate of the entire industry rests on the court's decision that Monsanto is now appealing.

Following April's court ruling, 107 patents could soon be void, which could force the company to leave the market, Ram Kaundinya, of the Federation of Seed Industries of India, which represents Monsanto, Bayer, DuPont Pioneer and Syngenta foreign companies, cautioned.

“The decision of the Delhi High Court has made biotechnology companies cagey about investing in their businesses because they apprehend that they will lose patents on their expensive technologies,” Kaundinya said.