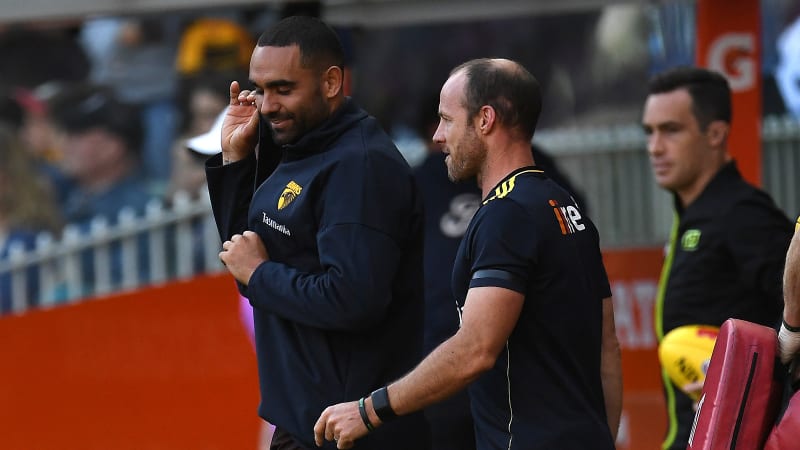 The Hawks have had to reconfigure their forward line without injured small forwards Rioli and Puopolo but believe they will still be able to enforce enough forward-half pressure against North Melbourne at Etihad Stadium on Sunday. Former Port Adelaide line-breaker Jarman Impey has become an important cog inside 50.

"We'll just work our way through that as the game unfolds," Clarkson said.

The Kangaroos are expected to send tagger Ben Jacobs to Tom Mitchell, hoping he will do the same job Melbourne's Nathan Jones did on the Hawks' ball magnet last week.

Mitchell is averaging 40 disposals a game and leads the league in contested possessions and clearances but was held to 24 by Jones, although the Hawks still had a thumping win over the Demons.

Clarkson said having a hard tag on Mitchell could work to the benefit of his side.

"It makes it easier for us, in a sense, but having said that, he [Mitchell] can also make a good contribution when it's just head-to-head in the middle of the ground, too," Clarkson said.

"We don't really mind one way or the other, but certainly it's not a case for us where if he gets tagged, we're thinking: 'Oh jeez, we're in all sorts of trouble'.

"As long as he's disciplined about it, which he was last week, it can be a real benefit for our side."

Victory would solidify the Hawks in the top four, while the rebuilding Roos, in seventh spot, can continue to surprise, for they had been expected to struggle.

Clarkson said he had not been surprised by the Roos' efforts and said their best six players were "comparable" to any in the league. One key will be to stop the flow of ball to key forwards Ben Brown and Jarrad Waite, who combined for eight goals against the Blues last weekend. Brown has 15 goals in his past three matches.

"If we allow them to generate 50 to 60 inside-50s, then we're not going to be able to stop Brown and Waite, I don't think," Clarkson said.