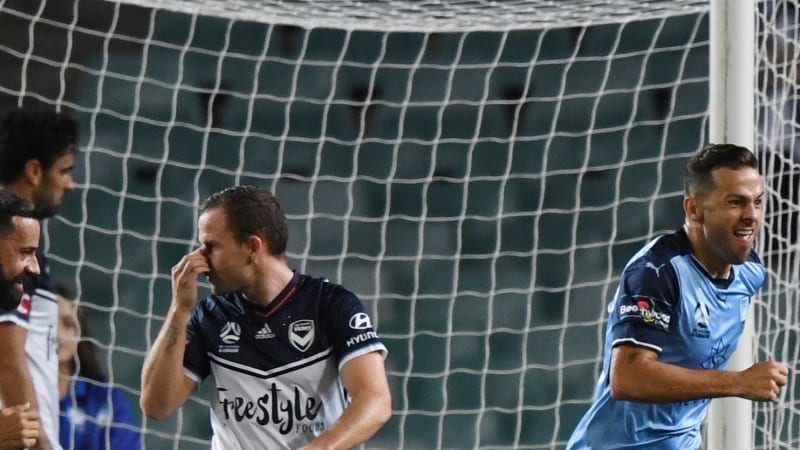 He was not prepared to cede any advantage to Sydney ahead of a possible meeting in a fortnight.

"Congratulations to Sydney. They have been the best team for 27 rounds [but] I don't think there was too much in it at all and the moments just went their way," he said.

"As the season has gone on we have got stronger and stronger. We were pushing and creating to the death."

The defeat means Victory have not beaten Graham Arnold's side since Australia Day 2016, when a Matt Jurman own goal gave them a 1-0 win at AAMI Park.

Victory ran Sydney close in last season's grand final, losing only on penalties when the scores were deadlocked after extra time, and Friday night's performance will give them plenty of confidence that they could upset the Sky Blues if these teams meet again in the semi-final in a fortnight.

To do that, Victory will have to win their home semi-final next weekend, which will almost certainly be against Adelaide United; the latter can afford to lose by two goals against Western Sydney on Sunday and still have a better goal difference than the Sydneysiders, who would end the season on the same number of points as them if they do triumph in that game.

Victory have, as Muscat pointed out post match, finished the season better than they started, and it is true that once they got over the disruption they suffered early in the campaign – Mark Milligan, James Troisis and Kosta Barbarouses missed several matches in October and November through World Cup duty – they did improve.

Milligan's departure in late January for Saudi Arabia also meant that they missed their most dynamic midfielder for the most crucial part of the season.

Besart Berisha is the club's top scorer again, but he has not been the player that he was in the past and he missed a brilliant opportunity to put the visitors in front in the fourth minute.

Had he scored from close range, who knows how Sydney's confidence might have been affected. The Sky Blues were, after all, under pressure to win against their biggest rivals as their fans were looking forward to rubbing Victory's noses in it by being presented with the premiers' plate after the game.

But Sydney are nothing if not ruthless. Almost straight after Berisha's miss, the Sky Blues went down the other end and after some neat play between Milos Ninkovic and Michael Zullo, Brazilian striker Bobo got just enough on Zullo's cross to deflect it past Lawrence Thomas and give Sydney what proved to be the match-winning goal.

After that Victory imposed themselves on the back-to-back premiers but could not find a way through. That's how it is with Arnold's team, so good at absorbing pressure and then striking on the break. It happens far too often for it to be luck.