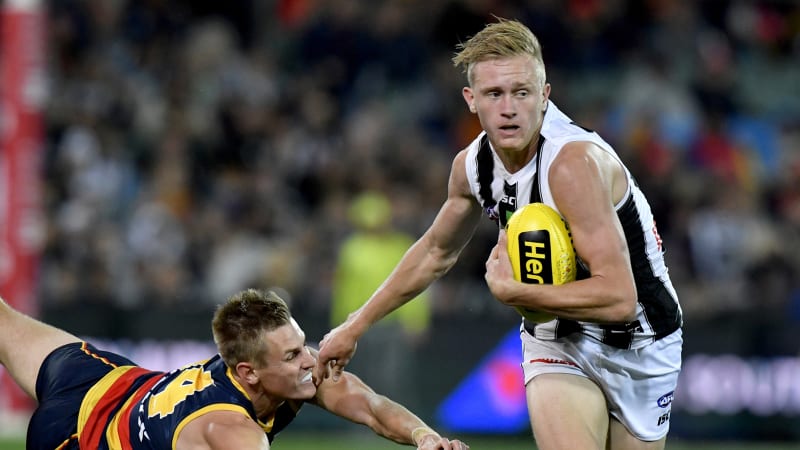 Collingwood outworked the Crows in the contest, beat them in the spread and were far cleaner with the ball.

On a slippery evening that favoured cleanliness, the Crows were beaten in every facet: their attack was lame; their midfield sloppy and their defence made to look sluggish. Adelaide closed the gap to 30 points early in the final term before Sidebottom and Pendlebury combined to set up a goal to James Aish that effectively killed the contest, if it was ever alive. The match concluded with an anti-climactic ambience, unless you were among the Collingwood contingent that made the trek across the border.

Eddie Betts, again quiet and without his trademark spark, finished on the bench with what appeared to be a hamstring. For the Crows, this truly was Friday the 13th.

Collingwoods opening half was stunning. If few would have foreseen that the Pies would boot eight goals to three, what was most unexpected was that they played, not just with greater intensity and endeavour, but with superior skill and system.

Collingwood handled the slippery ball far more effectively than the Crows, in what was a reversal of the normal pattern of these clubs. Less remarkably, the Pies were also fiercer in the contest, holding an advantage of 30 in the disputed balls in the opening three quarters, while also out-tackling the Crows, who seemed to be stricken with a strange lethargy.

Two further surprises were the performances of two players whom you would guess would struggle on a wet night at the Adelaide Oval. The first was the giant American Mason Cox, who was instrumental in setting up two goals to youngster Stephenson – one from a palm down in a marking contest near the goal square, the second from a well-directed kick in which Stephenson outpointed Jake Kelly one out.

The other unexpected catalyst was Stephenson himself, whose curling left-foot snap bounced through in the second quarter to make it three goals in a half for a teenager who probably would have been dropped – or merely rested – had Taylor Adams not pinged his hamstring.

Jordan De Goey was stationed as a forward and enjoyed some quality touches in his first game since his latest club-imposed suspension. Will Hoskin-Elliott was highly skilled.

The most influential player afield, though, was again Grundy, who bested Sam Jacobs in the ruck, but also gathered 25 disposals (16 contested) in the formative first three quarters and booted the most arresting goal of the first half, when he sprinted clear, took a bounce and drilled a shot from 50 metres.

Rory Sloane played like he was sore – he did not have a kick until late in the second quarter, and was often matched to Collingwood's sublime Sidebottom, who had his usual clean and effective game. His skipper Taylor Walker had a match much like his grand final: he was invisible.

The Crows were lacking in zip and enterprise and were beset by fumbling and – even more uncharacteristically – often missed targets by foot and hand.

Adelaide had barely a winner. Rory Laird accumulated possessions , without inflicting much harm. Bryce Gibbs played with some potency, relative to his teammates, and Mitch McGovern was the solitary effective forward.

Collingwoods defensive set up was also impressive, as the Pies constantly outnumbered the Crows, whose forward entries (they actually had more in the opening half) were lacking in conviction and competence. In time well know whether this result heralded a new, re-invented Collingwood, and if the Crows are really sinking.