If anyone has the capacity to break the internet, it’s this guy.

After yesterday’s brief teaser, Disney just made our year and dropped the highly-anticipated trailer for the Wreck-It Ralph sequel.

Ralph Breaks the Internet: Wreck-It Ralph 2 will follow the goofy hero (voiced by John C.Reilly) and fellow misfit Vanellope von Schweetz (voiced by Sarah Silverman) as they travel across the World Wide Web in an attempt to save Vanellope’s beloved video game, Sugar Rush.

The team must rely on the citizens of the internet—the netizens—to help navigate their way, including a website entrepreneur named Yesss (voice of Taraji P. Henson), who is the head algorithm and the heart and soul of trend-making site ‘BuzzzTube.’ Which we can only assume is a weird culmination of Buzzfeed and Youtube.

One of the film’s directors, Phil Johnston, told EW that the temptations of the internet bring out drastically different POVs for the heroes.

‘Ralph is this older video game character who’s thrust into this world that’s confusing and constantly changing, and we lean into that notion that the internet is different today than it was yesterday, and it will be different tomorrow than it was today,’ explains Johnston.

‘That’s part of the challenge that Ralph in particular faces. Meanwhile, Vanellope’s much more equipped to deal with that than Ralph is. She’s younger and more spirited, and he’s sort of a big, oafish doofus who can’t quite handle it.’

It has also been previously teased that Vanellope will be chilling with some well-known Disney princesses. Kirsten Bell, Ming-Na Wen, Kelly Macdonald, Mandy Moore, Auli’i Cravalho, Idina Menzel, and Jane Lynch will all be part of the film.

Currently, it is not known how they will fit into the story. However, fans have suggested that there may be some sort of alternative universe consisting of Disney and Marvel characters, as Iron Man and the likes of Darth Vader are said to be joining.

The Late Late Show host James Corden has also nabbed himself a mystery role… Honestly, is there anything James isn’t an extra in these days?

The trailer is the first real glimpse at what to expect when the film drops this year, and if the trailer is anything to go by, it’s going to be one to remember.

Ralph Breaks the Internet: Wreck-It Ralph 2 will be arriving in US and UK cinemas this coming November.

MORE: Disney has told us when the next Toy Story, Avengers and The Incredibles movies are out

Holby City review with spoilers: The end of Gaskell 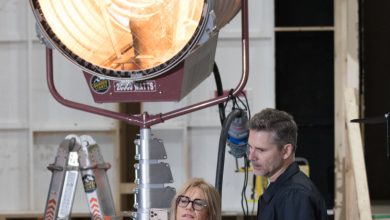