Stormzy is in talks to perform at a memorial concert dedicated to Stephen Lawrence.

The singer met Stephen’s mum Baroness Doreen Lawrence at the Brit Awards, who is currently working with music execs at Universal to put on several shows for the 25th anniversary of her son’s death.

The 65-year-old was introduced to Stormzy and has since revealed that the grime star was willing to show his support.

She told 3am (via Mirror Online): ‘Stormzy spoke to me about getting involved. He’s amazing. We’d like to put on a few different concerts around London rather than one single memorial.’

Plans have apparently already been made for the gigs and Doreen is hoping some big names will feature at the events.

The concerts will mark 25 years since Stephen was murdered by in an unprovoked attack in Eltham, South East London, on 22 April, 1993.

Doreen has revealed that this will be her last year of campaigning after she set up The Stephen Lawrence Trust.

The Pride of Britain winner said: ‘Then it’s time to move on.’

Stormzy took home two awards at the Brits, and stole the show with his closing performance where he sung his gospel tune Blinded By Your Grace, before a freestyle rap that slammed Theresa May.

He said: ‘Like yo Theresa May where’s the money for Grenfell? What you thought we just forgot about Grenfell?

‘You criminals, and you got the cheek to call us savages. You should do some jail time you should pay some damages,we should burn your house down and see if you can manage this.’

The Prime Minister has since hit back at Stormzy’s rap, as her spokesman said: ‘The prime minister has been very clear that Grenfell is an unimaginable tragedy that should never be allowed to happen again.

‘The public inquiry was set up by the prime minister to establish what went so tragically wrong and why people weren’t listened to for so many years.’

They added: ‘She has met with the families and survivors on a number of occasions.’

MORE: Theresa May hits back at Stormzy over Grenfell Tower rap at Brits

Wanna Ones contract has officially expired – whats next for the 11 idols? 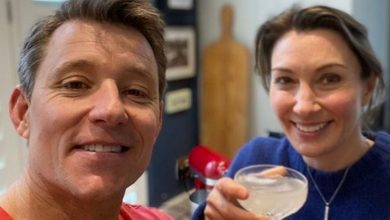