As the Boycott Divestment and Sanctions (BDS) faces a series of institutional attacks to outlaw it, one Norwegian lawmaker has nominated the campaign for a Nobel Peace Prize.

In a video interview with Middle East Eye, Parliament Member Bjornar Moxnes dismissed charges of anti-Semitism, saying that his nomination is aimed at the Israeli government, not the Jewish people.

“The BDS movement is a legitimate, peaceful, non-violent movement trying to push the Israeli government to abide by international law, and trying to struggle for a peaceful solution in Palestine and in the Middle East,” he said.

Moxnes said the Red Party, which he leads, works to achieve social justice in Norway and internationally.

“We try to make sure that Norway acts as a peace nation, not as a nation taking part in the US wars all over the world,” he told MEE.

Although any member of a national legislative body can make a nomination for the Nobel Peace Prize, news of Moxnes’ choice was not welcomed in Israel.

Israeli Parliament Member Sharren Haskel wrote a letter to the Norwegian ambassador in Tel Aviv denouncing the nomination and bashing BDS as violent and anti-Semitic.

As a member of the Norwegian Parliament, I'm proud to nominate the Boycott, Divestment, and Sanctions movement for the Nobel Peace Prize https://t.co/ensTsq3vFApic.twitter.com/ExHlJcGXKG

“There is nothing peaceful about delegitimising a country’s academic and cultural institutions that are critical to creating an environment conducive for peace,” Haskel, who is a member of Prime Minister Benjamin Netanyahu’s right-wing Likud Party, wrote.

Moxnes rejected the accusations comparing BDS to other peaceful movements throughout history, including the campaign to boycott the apartheid regime in South Africa in the 1960s.

Israel occupied the West Bank, including East Jerusalem, in 1967, and it continues to build settlements exclusive for its citizens throughout the Palestinian Territory, setting up separate public transport, education and municipal systems that critics and legal scholars say amount to apartheid.

The UN Security Council condemned the occupation in December 2016.

“It’s perfectly possible to be against these policies from the government and support the BDS campaign to put pressure on them, and at the same time be perfectly clear against any kind of anti-Semitism. That’s our platform,” the Norwegian lawmaker said.

The BDS movement is a legitimate, peaceful, non-violent movement trying to push the Israeli government to abide by international law.

Moxnes said Norwegians have a spectrum of different views on the conflict.

“But in general most Norwegians support the rather basic idea that also Palestinians have human rights, that they have a right to have their own state and decide their own future – and that’s the main goal of the BDS campaign,” he added.

Moxnes said the nomination has received overwhelming support from inside Norway and “people all over the world who struggle for peaceful and just solution between Israelis and Palestinians”.

The lawmaker also acknowledged negative reactions from advocates for “the right-wing extremist government of Israel”.

For example, Arsen Ostrovsky, the executive director of the Israeli-Jewish Congress (IJC), told the Jerusalem Post that Moxnes’ choice “makes a complete mockery of human rights and pursuit of peace”.

The BDS campaign has gained publicity over the past few years, with academics, artists, religious congregations, unions and political organisations across the world joining the call of Palestinian civil society activists to boycott Israel.

But a Nobel Peace Prize? Moxnes does not think it’s inconceivable.

“Our hope is that this nomination will ignite the BDS campaign and will give it a lot more support and attention all over the world, and of course, that it will end up on the shortlist in September for the Nobel Peace Prize, and hopefully also win the Peace Prize,” he said.

Mattis: Don’t restrict US support to Saudi-led forces in Yemen 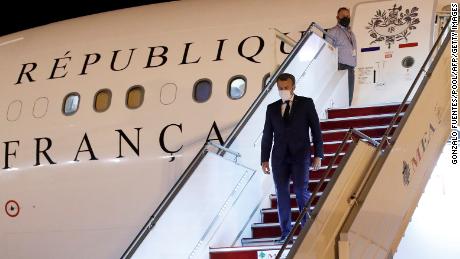 With Macron’s visit to Beirut, Lebanon’s future is looking a lot like the past

Edutainment shows how to teach Saudi women about driving safety