Follow @cnnsportCilic moved into Sunday's final when he defeated Kyle Edmund of Britain 6-2 7-6 (7-4) 6-2, getting a little help from an unseeded opponent who appeared to be hindered by injury. Two days earlier the world No. 6's quarterfinal opponent — 16-time grand slam winner Rafael Nadal — had to retire in the fifth set after picking up a leg injury. As good as Cilic was performing against Nadal — and he was — without the injury it was difficult to see the 2014 US Open champion overcoming the Spaniard. But it is not like Cilic hasn't experienced health woes on court himself. Last year an injured foot in the Wimbledon final greatly hindered a crestfallen Cilic and he was barely able to test Roger Federer. He could get another crack at Federer Sunday, as the defending champion and 19-time grand slam winner will be expected to beat the exciting but inexperienced Hyeon Chung of South Korea in Friday's second semifinal. READ: Chung beats Djokovic"I had … one amazing experience in a final and one not so amazing," said Cilic, who beat Federer en route to his US Open crown. "So I had both emotionally great and not great."I think it's gonna help me to stay focused on what I have to do. Now I have two days off. It's slightly different of the routine that I had during all the tournament, but I have to stay focused mentally and to be ready from the first point on the final. "It's big motivation for me to play that final and obviously to win, and I'm feeling really good with my game, and so hopefully I can have a great match and also great energy on the court."

All the time Edmund spent on court during the grand slam fortnight — he contested two five-set matches and a pair of four-setters — might have caught up with the world No. 49. His forehand lacked its customary punch. Edmund went off court for a medical timeout to end the first set, the reason unknown. He didn't elaborate when he spoke to reporters. But after the 23-year-old felt he received a bad call from chair umpire John Blom early in the second set he became reinvigorated. Edmund desperately needed to claim the second set to have any chance of registering a second consecutive win over a top-10 player but his hopes vanished when Cilic grabbed the tiebreak. The third set was a mere formality. 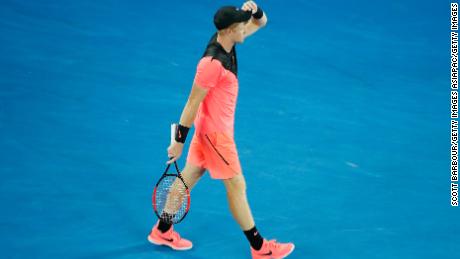 Still it was a memorable Australian Open for Edmund, who landed in a first grand slam quarterfinal and was Britain's most successful player in the absence of the injured Andy Murray and with Johanna Konta ousted in the second round. "There's something, but whatever," Edmund said when asked if there was an injury issue. "It's unfortunate. It happens. I'm definitely disappointed about it, but yeah, it's one of those things where I have to look at the whole week. "Making semifinals of a grand slam is definitely something that I can be very happy with and really take that forward, yeah, just take that forward with me and build from it for sure. I mean, take belief and confidence from it."Who will the Australian Open? Have your say on our Facebook pageThere are not many firsts for Federer nowadays but when he meets Chung, it will be the first time in any of his grand slam semifinals that he has never previously faced that opponent. The top two women in the rankings — Simona Halep and Caroline Wozniacki — will do battle in Saturday's final after they won their semifinals at Melbourne Park in contrasting fashion earlier Thursday.

Victory get one on City in historic Melbourne derby