Over six years into a war that — after outside powers ensured the near defeat of ISIS, and of the Syrian rebellion itself — is slowly and bloodily coming to an end, the Trump administration is finding itself doing precisely what its predecessor resisted, and settling in for the longer term.Tillerson was very specific about what needs to happen for the US to stop "remaining engaged" in Syria — a set of conditions which, if shared as an opinion by the White House and Pentagon, potentially amount to a long presence indeed.Firstly, he said ISIS and al Qaeda must "suffer an enduring defeat." ISIS are massively diminished, but questions remain about where possibly hundreds of stragglers may be — including the foreign fighters and leaders who fled the final stand in Raqqa. Some are trying to get to Turkey, others are mingled with refugees in the desert. They'll be hard to track and likely will return as a ragtag insurgency. The addition of al Qaeda to this mix raises a point many Western officials have kept out of sight as the ISIS war wound up: there are hundreds of foreign al Qaeda members in northwest Syria's Idlib area. They are currently facing a regime onslaught, but they have no love for the West. Ensuring their "enduring defeat" is a long-term project that hasn't really gotten underway yet.Tillerson's second condition is that the "underlying conflict between the Syrian people and the Assad regime is resolved through a UN-led political process prescribed in UN Security Council Resolution 2254, and a stable, unified, independent Syria, under post-Assad leadership, is functioning as a state." That's a lot. It does appear to stick to the Obama administration's demand that Syrian President Bashar al-Assad leave — yet it also adds in UNSC resolution 2254, passed in late 2015, which called for elections by the middle of last year. In short, this point possibly ties the US to being in Syria until Assad is gone.

Thirdly, according to Tillerson, Iranian influence in Syria must be "diminished". This is no easy task. Iran is a key backer of the Assad regime, and its militias assisted in much of the fighting. The Iranians have deep roots in Lebanon, via the Shia militant group Hezbollah, and they are equally well-served by allied militias in neighboring Iraq. 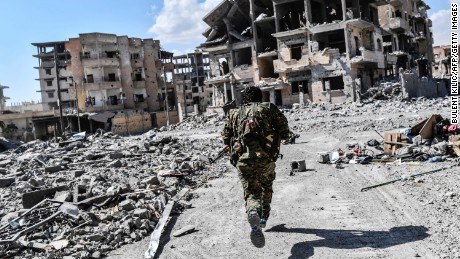 A US military presence in northern Syria can monitor or maybe get in the way of Iran's influence there, particularly on the long route towards Lebanon and its neighbor Israel, but it can't stop it outright.Tillerson's fourth desired outcome is for conditions on the ground to improve to the point where "refugees and IDPs can begin to safely and voluntarily return to Syria." Currently the regime advances around rebel-held Idlib are creating a displacement crisis, rather than reversing it. But if Turkey has its way and offers enough assistance, parts of the north can be made habitable enough for the millions of Syrians in southern Turkey to contemplate going home.Fifth, and finally, Tillerson added that Syria must be "free of weapons of mass destruction." This harks back to the use of Sarin gas in 2013, of which Damascus was accused, which led to Russia persuading the Assad regime to let in inspectors to remove their chemical weapons program.

One Western official CNN spoke to just after that process was announced as complete said he thought about 99% of the weapons had been collected, and that there was just an issue over the items used in the 2013 Sarin attack itself. If the regime had handed those over, the official said, it would have been an implicit admission of guilt in the original attack. Tillerson's final point was almost added as a kicker, just in case the previous four could be magically resolved overnight.He was clear that the many "stabilization" operations underway with American assistance — mine-clearing, local governance — did not amount to "nation building". But he added that a total US military withdrawal "would restore Assad and continue his brutal treatment against his own people", and also create potential "ungoverned spaces" in which ISIS might flourish again, citing the 2011 departure of US forces in Iraq that gave ISIS room to grow there. Read: Syrian army vows to eject US troopsIt is an extraordinarily detailed, point by point approach from the Trump administration that inserts US forces into a geopolitical minefield they once sought to avoid — and one that they arguably now risk worsening if they suddenly pull out overnight. And while this wish list is so extensive it may never be fully satisfied, it will perhaps reassure America's allies concerned that four years of Trump would mean four years of US isolationism and withdrawal.

Fleeing Africa to safety, then labeled as an ‘infiltrator’ in Israel