Follow @cnnsportAfter Caroline Wozniacki fended off a pair of match points and rallied from 1-5 in the third set against little known Croatian Jana Fett on Wednesday, world No. 1 Simona Halep saved three against Lauren Davis in a 4-6 6-4 15-13 classic that was no less dramatic Saturday. Maria Sharapova couldn't escape later, ousted by tennis' most in-form player, Angelique Kerber. Many thought that match would be a classic too but the twice grand slam champion needed only 64 minutes to dispatch Sharapova 6-1 6-3. Three times in the third set, incredibly, Halep couldn't serve it out against her 76th-ranked rival and it looked like the Romanian would pay the ultimate price as she served at 10-11, 0-40. READ: Players sent to 'abattoir'READ: Wozniacki's great escapeBut Halep dug deep to hold. Davis then took a medical timeout due to a toe injury and later Halep officially progressed when a forehand down the line from the American went wide. At three hours, 44 minutes it wasn't the longest women's match in time at the Australian Open but it did tie the longest match in games alongside Chanda Rubin's 1996 victory over Arantxa Sanchez Vicario."I'm almost dead," Halep told the crowd in her on-court interview at Rod Laver Arena. In her briefing with reporters, Halep admitted she thought she was on her way home when staring at the trio of match points. "Honestly, I thought it's over at that moment, but it was good because I relaxed my arm and I served pretty well those three balls," she said. "And then she took the medical (timeout). I had time to calm down. I had come to believe again, to restart the mind.

"And also I found more energy after that three minutes' break. But at 13-all when I took the game, I said it's my lucky number."I think in the past I wouldn't have fought that hard. Maybe when she had the match balls, maybe I would have lost it. But now I improved in that way and it makes me really happy that I change myself in a good way."She has often credited her much respected coach, Darren Cahill, for improving all facets of her game. Thankfully for Halep and all parties involved, the blazing temperatures of the previous two days in Melbourne dipped considerably. From a high of 40.2 degrees Celsius Friday, Saturday's peak reached just under 25 degrees. That can happen in Melbourne, where the weather is famously unpredictable. The win maintained Halep's chances of winning that first major but unlike Wozniacki — who is still seeking a first one as well — her immediate prospects might not be rosy. Halep — the WTA's most popular player last season as voted by fans — continues to play on an injured left ankle and leg after taking a tumble in the first round. Spending so much time on court Saturday won't have helped, despite the momentum garnered by such a marathon outing. "It's sore," Halep said of the ankle. "I felt the pain. It's not recovered. It's impossible to recover after. After this match I think tomorrow is gonna be worse, but I just push, push myself, and we will see what's gonna happen." 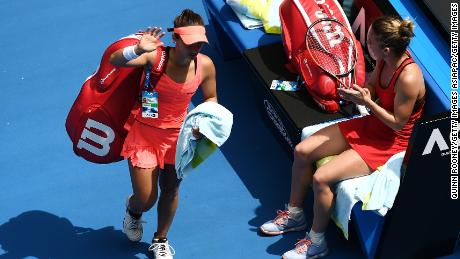 And Halep certainly sits in the tougher section of the draw, with Karolina Pliskova and Kerber her possible foes later. Naomi Osaka is the dual French Open finalist's next opponent, the Japanese crushing — 'crushing' is apt given the pace on her groundstrokes — local hopes by defeating Ashley Barty 6-4 6-2 in a match shifted from Rod Laver Arena to Margaret Court because of the length of Halep's slugfest. Davis — one of the shortest elite players on the tour at 5-foor-2 — didn't appear too downbeat in defeat. Keep in mind that in her lone other confrontation with Halep, she claimed only two games. "There is a lot to take away from that match," said Davis, whose father Bill is a prominent cardiologist who wrote the foreword to Novak Djokovic's book, 'Serve to Win.' "I played really, really well. Left all that I had out there on the court, and I did all that I could do."

Kerber too good for Sharapova

Sharapova's tussle with Kerber was, on paper, meant to be Saturday's marquee tussle. Former No. 1 Kerber has sizzled to begin the season after a difficult 2017 while the Russian is a five-time grand slam winner who — even if she is seeking top form after returning from a drug suspension last year — remains one of tennis' top competitors. Kerber however never allowed Sharapova to settle, setting the tone by breaking in the first game. Sharapova found respite by recovering a break early in the second but the 21st seed broke again for 5-3 and served it out for a 12th successive win, including the Hopman Cup 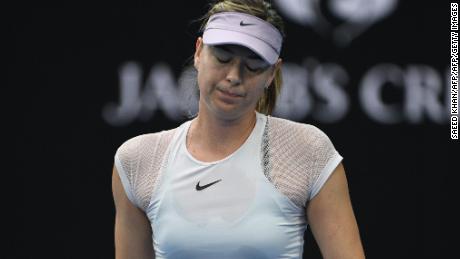 Alexander Zverev followed Halep on centre court and was upset by South Korea's Hyeon Chung 5-7 7-6 (7-3) 2-6 6-3 6-0 to continue his struggles at majors. The German fourth seed has received much hype but at the grand slams he has yet to make a quarterfinal — or beat top-50 opposition. Three of the 20-year-old's last five losses at slams have come in five sets. "I have some figuring out to do, what happens to me in deciding moments in grand slams," he said. "I'm still young, so I got time. I definitely have some figuring out to do for myself."Two threats to Roger Federer in the Swiss' quarter are now out. Following the departure of David Goffin, a weakened Juan Martin del Potro was swept aside by his fellow thumping baseliner Tomas Berdych 6-3 6-3 6-2. Del Potro said he felt jaded following his second-round win.

Djokovic, in Federer's half, was untroubled by Albert Ramos Vinolas, going through 6-2 6-3 6-3. In his first tournament in six months as he recovers from an elbow injury, the Serb though required a medical timeout in the second set for what may have been a hip issue. Tennis was also a winner. 'Tennys' that is. Tennys Sandgren is the unlikely last American man standing, overcoming Zverev's countryman Maximilian Marterer 5-7 6-3 7-5 7-6 (7-5). Defending men's champion Federer plays last up Saturday, versus Richard Gasquet. Visit our tennis page for more Australian Open coverageBut it's hard to imagine his match topping Halep's in suspense.

Arrows pick up second win of the season

I will not fall for Jones’ mind games – Erasmus