OTTAWA, Ontario (AP) – Alex Pietrangelo celebrated his 28th birthday by scoring his first goal in more than two months. And, it ended up being a winner for the St. Louis Blues.

Pietrangelo, Vladimir Tarasenko and Brayden Schenn each scored in the second period of the 4-1 win over the Ottawa Senators on Thursday night. 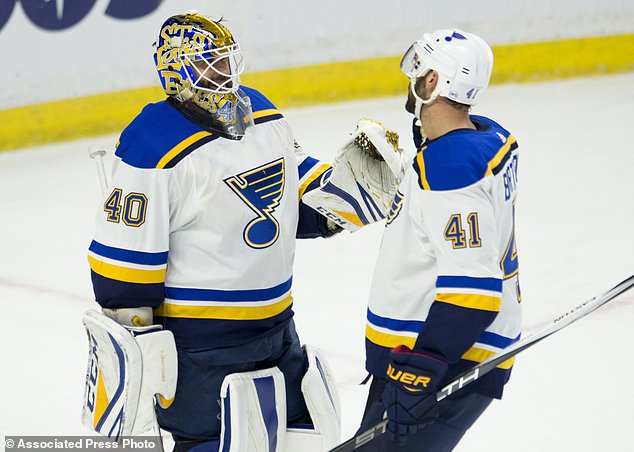 The win was the second straight in Ontario for the Blues, who were 2-1 overtime winners over the Toronto Maple Leafs on Tuesday.

"One, it's on your birthday, but two, it's finally nice to get back on the board about 4,000 shots later," said Pietrangelo, whose last goal came on Nov. 11 against Arizona. "I think we felt it coming, someone on the back end was going to score. Five-on-five, we've really been jumping in the last two games here. It was just a matter of time before one of us got one."

Bobby Ryan had the lone goal for the Senators (15-19-9), and Craig Anderson made 33 saves. Ottawa was coming off its bye week and hadn't played in eight days.

The first period produced no goals and only one good scoring chance, when Hutton stopped Zack Smith on a breakaway after the Senators forward stole the puck at his own blue line and broke toward the St. Louis goal.

The second period was not a good one for the Senators as they were outshot 19-6 and, more importantly, outscored 3-1.

Tarasenko struck 6:13 into the period with a tip in front while spinning away from Robert Bortuzzo's point shot in front of Anderson.

The Blues took a 2-0 lead at 12:51 thanks to Anderson who, after making a save, batted the puck out of midair directly to Pietrangelo who had an empty net to shoot at from the left faceoff circle.

Anderson could also be blamed for the Blues taking a 3-0 lead at 16:53 as he misplayed a backhand from Schenn and allowed the puck to pass through his legs.

"The second period, it's a disease," Senators coach Guy Boucher said. "We stop shooting, we get perimeter play, we get east-west play, complicated plays and you get the second period we had. It's a disease we have to get rid of. We had the same disease last year to start the year and we got rid of it over time. It creeps back in.

"When we're at our best, that's not who we are, and we lose games because of the second period. We've got to get rid of that disease."

The Senators got one of those back at 17:21 when Ryan's shot from 10 feet inside the blue line redirected off the stick of Dmitrik Jaskin and over the shoulder of Hutton to cut the lead to 3-1.

"We got the first period we wanted," Boucher said. "They were ready to go, they played hard and didn't give much to the opponent. In the first period, we followed the plan. We played deep on them, we played 200 feet away from our goaltender and we shot.

"The first period was exactly what we wanted coming out of the break … and then, the second period."

The Senators got defenseman Mark Borowiecki back into the lineup after he missed 22 games with a concussion. He delivered a big hit early, got into a fight and got his finger bitten by Kyle Brodziak during a scrum late in the second period.

"He did, but it's not a big deal. We were laughing about it afterward," Borowiecki said of the bite.

NOTES: Ottawa forward Nate Thompson left the game and did not return with an undisclosed lower-body injury. … Fredrik Claesson and Jean-Gabriel Pageau were scratches for the Senators. … Carl Gunnarsson, Scottie Upshall and Oskar Sundqvist were scratches for the Blues. … The Senators haven't beaten the Blues in Ottawa since December 2013. … The Blues have earned points in their last 11 games against Ottawa. 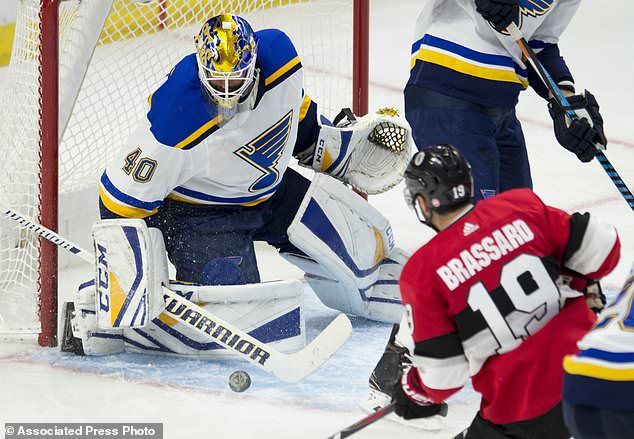 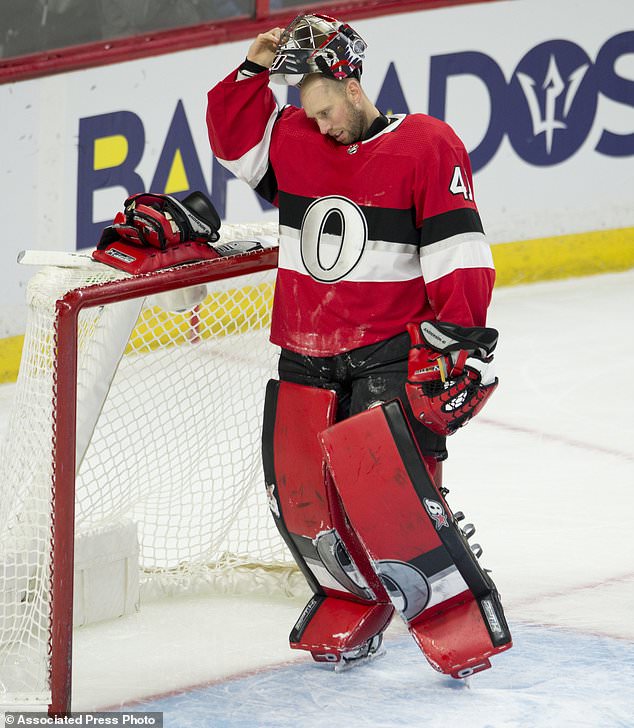 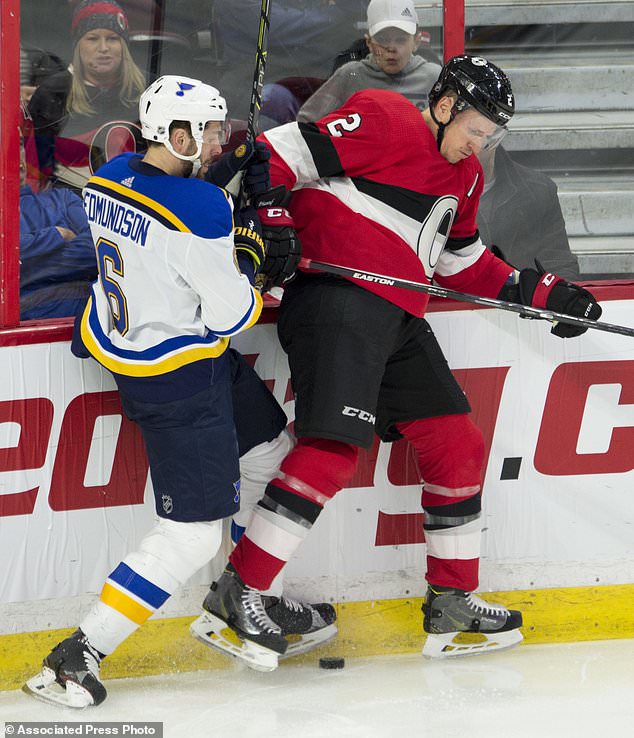 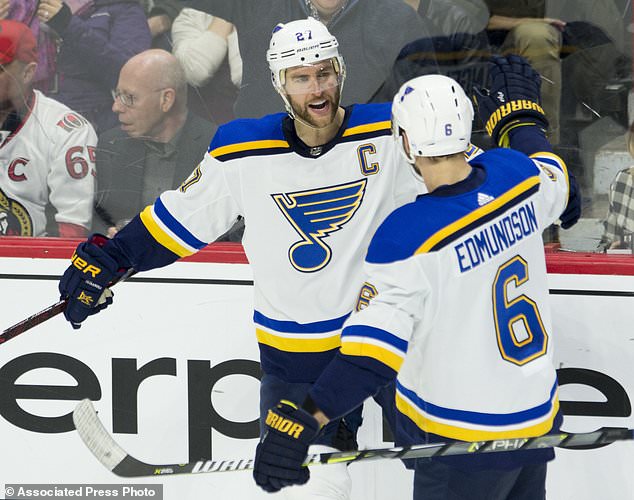 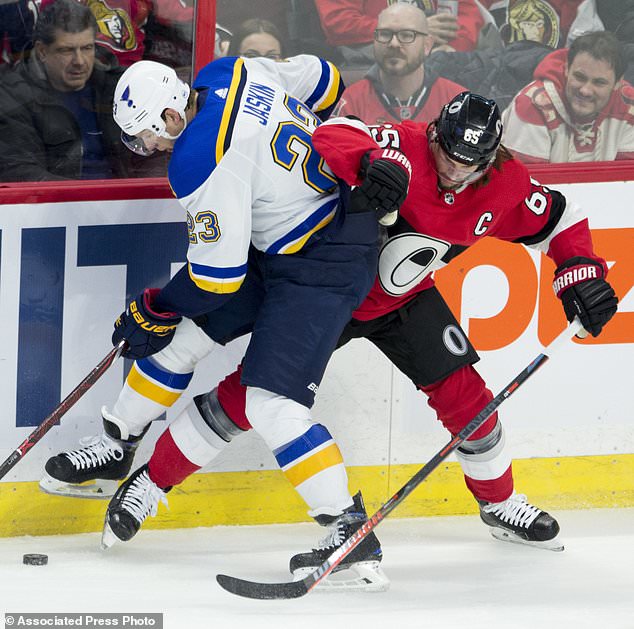 A treasure trove of history at museum